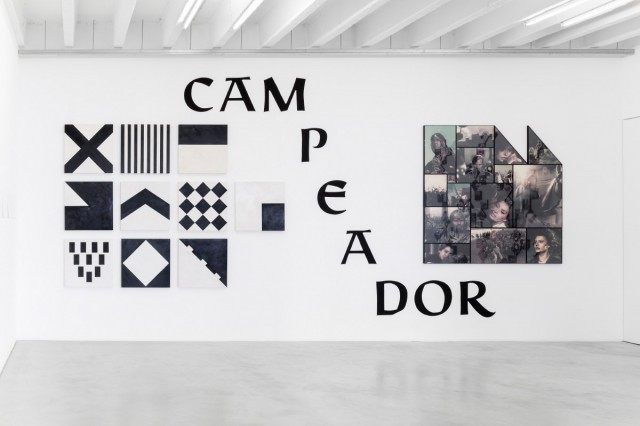 Galerie Nordenhake is pleased to announce "Encyclopedia of the Dead" - the first solo exhibition of Mexican artist Iñaki Bonillas' in Berlin. By borrowing its title from a collection of short stories by Danilo Kis, Bonillas also adapted the method from Kis, working on the thin line that exists between the imaginary and the genuine reality behind a historic document such as a photograph. The artist contends that fiction might add another layer to the truth unavailable to the historical record on its own.
Whereas Bonillas concentrated on using one main source - like his grandfather's comprehensive photographic archive - to inform his previous artistic practice, he now employs multiple sources. The exhibition in Berlin comprises five multi-media installations each dedicated to one of five different dead men. Not any dead men: Men-either fictitious or real-that try, one way or the other, to maintain a relationship with the living. Paradoxically, what they are for us today was defined only through their death.

In the first installation Bonillas reconstructs the possible library of the protagonist of The Posthumous Memoirs of Braz Cubas (1880), a novel by Brazilian author Machado de Assis. In this fictional narration, Braz Cubas writes his memoirs from the afterlife, defining an accurate self-portrait through the authors he quotes. A sound piece reverberating the very last glimpse of the character's consciousness is also integrated in the installation. Black is the dominant colour and the installation echoes a mysterious perspective from another dimension.
In perfect chromatic contrast, white has an obsessive presence in the last days of Captain Lawrence Oates, one of the five members of the tragic British Antarctic Expedition led by Robert Falcon Scott in 1912. The installation dedicated to Oates consists of three types of work reflecting on both his personal vision and the more general historical perception of the South Pole through history. Mythology and popular culture are ironically intertwined in Bonillas' reconstruction of the legendary figure of Rodrigo Diaz de Vivar, El Cid Campeador. Bonillas ́ complex project further comprises two more works dedicated to the ghost of Hamlet's father and to a mysterious - possibly autobiographical - character described in Charles Darwin's Diary. By using a quasi-scientific sense of compilation and classification, Bonillas creates a system where the illusory objectivity can abruptly collapse once faced with a single detail.

In conjunction with this exhibition Bonillas will have another show titled "The Eyes" in the gallery Niels Borch Jensen located in the same building (http://www.berlin-kopenhagen.de).