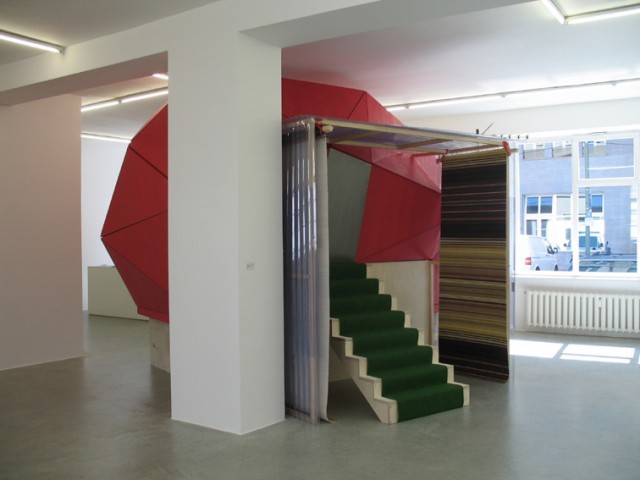 Galerie Nordenhake is very pleased to present an exhibition by the Slovenian artist Marjetica Potrc, an architect turned sculptor who works at the interface of art, architecture and social science, exploring local innovations in the built environment. For the exhibition, Potrc has installed a site-specific structure that evolved from her case study of the Lucy House in Greensbro, Alabama, designed by the Rural Studio in 2002 for Anderson and Lucy Harris and their three children. Rural Studio is a program founded in 1992 by Samuel Mockbee for architecture students at Auburn University in Hale County, Alabama, one of the poorest regions in the United States.

Potrc’s work negotiates with the gaps in knowledge that result when urban planners and architects insist on creating order. Notably, Potrc is interested in what architects and planners cannot predict. Notions such as homelessness, the shantytown, outsider communities, and the role of imagination are united in Potrc’s work with an architecture of immediate, personal response.

The ‘Lucy House Tornado Shelter’ is an organic, ‘living’ structure based on the metaphor of the human body’s spontaneous and unplanned behavior. The house includes a built-in tornado shelter topped with a ‘crumpled’ dome. This dome is not the actual shelter; rather, it is protecting the structure underneath. Potrc’s design takes into consideration her work with Buckminster Fuller’s tensegrity domes, which she encountered while at the Burning Man Festival. A tensegrity dome involves a coordination of pressure and release, push and pull. The dome is built by adjoining segments at different angles together so that in the overall structure an equilibrium of push and pull occurs between segments weighed on and those weighing.

Potrc’s study evolved out of her interest in architecture that emphasizes ‘self-reliance’ and ‘individual empowerment.’ This is accomplished through the usage of alternative, environmentally sustainable construction materials, combined with little money and much creativity. She investigates how to improve relations between society and the individual, asking what sort of space is available to us for freedom. Transforming scrap material and ‘junk’ into a solid, sturdy structure, Rural Studio’s work has provided the opportunity for many underprivileged families living in substandard housing to move into a house that is not only a home, but a shelter for the soul.

The Lucy House’ unites residential architecture with an emergency provision, the permanent need with the temporary necessity. As with her previous projects, Marjetica Potrc is continuously exploring fundamental human needs: community, safety, and shelter. In addition to the house, Potrc will also exhibit new drawings that are somewhere between an architectural plan and a mental association chart. These drawings give insight into her idiosyncratic process of thinking about urgent problems in urban architecture.
www.nordenhake.com