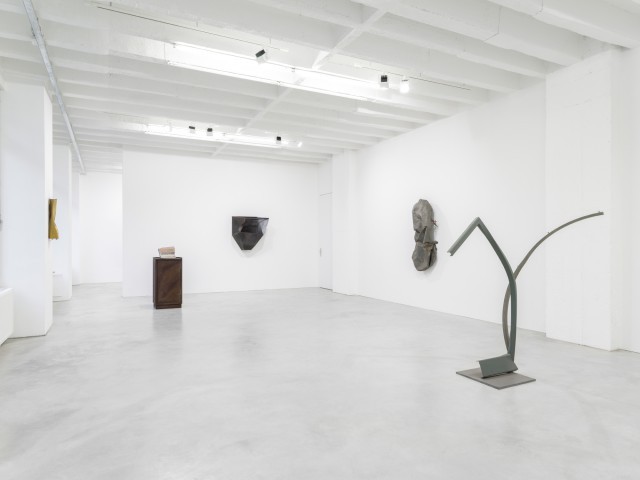 In his sixth solo exhibition at the gallery Meuser presents a group of new wall-based works and freestanding sculptures under the exhibition title "Kann ich mich hier auch selbst einweisen?“ (Can I Admit Myself To This Place?), a title that seems a logical follow-up to his 2014 show "Herr Ober, zwei Doppelte" (Waiter, Two Double Shots).

For more than 40 years Meuser has been finding his material, discarded industrial objects made from steel or iron, primarily at the scrapyard. The search for a suitable industrial relic is an essential part of his artistic process; as Meuser puts it: "Scrap, there is tons of course but it contains a lot of rubbish." Ignoring the original function of the often bulky found objects, Meuser reworks them in the studio, welds them together, or sometimes simply paints them. With minimal interventions the artist thus constructs three-dimensional works that oscillate between sculpture and painting. The arrangement of the objects in the manner of an installation—in particular his wall-based works—facilitates an experience that is rather pictorial. Obvious signs of wear, like marks and scratches, in the material evoke painterly gestures. This effect is enhanced by coating the found objects with ordinary industrial paints and oil. At the same time, the monochrome color infuses the metal fragments with an amorphous vitality and physical presence, evoking an illusion of lightness, which counterbalances the actual physical weight of the material.


The unpretentious and modest vocabulary of Meuser’s more geometric body of work has a constructivist formal clarity that is reminiscent to strategies of Minimal art, especially considering his specific use of materials. With his so-called “Knautsch” works (roughly translated from the German, it means “crumpled“), Meuser expanded this idiom and since 2011 he has developed works that are literally crumpled: i.e., squeezed, crushed, and bent. As a student of Beuys at the Kunstakademie Düsseldorf, Meuser developed his abstract constructivist vocabulary particularity in the context of the work of older colleagues such as Blinky Palermo and Imi Knoebel, who—like Martin Kippenberger—had significant influence on his work. With Kippenberger he shared an ironic and down-to-earth approach to artmaking and he sometimes visited his friend to create titles for the works (“Titel kloppen”), just as one would slam cards on the table in a game of skat.

Ultimately, with his specific handling and installation of the works, but especially with his idiosyncratic titles, Meuser ironically transfers his materials into an everyday world oscillating between banality and poetry. Meuser’s hilarious and disrespectful titles are inspired by the distinctively blunt and irreverent everyday rhetoric of the Ruhr valley, as well as popular songs (“Schlager”), proverbs, or jokes. These titles are found fragments just like the scrap metal, extracted from their original realm of meaning. They render the work as a self-referential whole composed of image and text and allow for new iconographic interpretations and various—sometimes anarchic—associations.