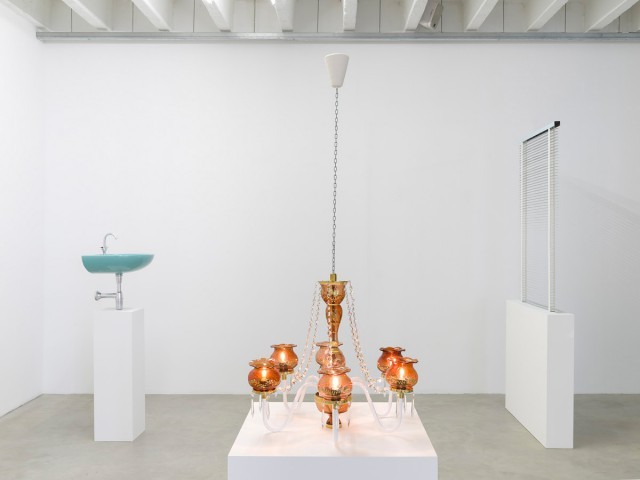 Installation view
SIROUS NAMAZI
Twelve Thirty
A case study of my childhood home in Shiraz, Iran before its plundering
2 May - 20 June 2015

In addition to exploring the legacies of Minimalism, the Readymade and the multiplicity of urban living and mass consumption, Sirous Namazi has throughout his practice explored themes of failure, vulnerability and destruction — both structural and personal.
In the last years the artist has worked on a comprehensive project Twelve Thirty in which he directly addresses the key moment that led to his escape from Iran. On 15th of November 1978, when Namazi was 8 years old, his family home was plundered and destroyed in connection to the persecution of members of the Bahá'í faith in Shiraz. This event was part of a pattern of persecution, which pushed the Namazi family into hiding and flight, and eventual immigration to Sweden.
The exhibition is a spatial study of Namazi’s childhood home before it’s plundering. Using his own memory and that of his parents' and siblings', and a few remaining photographs, Namazi attempts to reify individual objects of his childhood home: six metal chairs, a glass chandelier reconstituted with hand-painted, hand-blown glass and copper metalwork; the large wardrobe; the steps leading to the courtyard, or the refrigerator which his sister remembers so vividly as the first thing that caught her eye when entering the destroyed house. All these items have been painstakingly remade by hand and arranged in relation to each other to reincarnate the home in the gallery space.
For the first time the artist is showing his film Twelve Thirty which describes the daydream moment of everyday calm before a catastrophe. The film traces the complex processes of remembering. In a 3D animation program the artist re-constructs how his home looked like before 12:30—the moment before it was destroyed.
The project Twelve Thirty ties together many of the themes that have permeated the artist oeuvre: from his experience as an immigrant in Sweden embodied in a suburban balcony (Periphery, 2002) and in a video work defining outsiderness through language and cultural references (Sirous Telling Jokes, 1996), to his "failed monument" presented in the Nordic Pavilion at the Venice Biennale in 2007 (Untitled, 2007), to the implicit anarchy and destruction in his tipped supermarket shelves (Leaning Horizontal) and the slow demolition of walls rubbing against each other in a constant earthquake (Untitled, both 2012).

Sirous Namazi was born in 1970 in Kerman, Iran. He lives and works in Stockholm. In 2007 he represented Sweden (with Jakob Dahlgren) at the 52nd Venice Biennial in the Nordic Pavilion. He has had solo exhibition at Fundació Joan Miró (Espai 13), Barcelona (2010), Lunds Konsthall (2009) and Moderna Museet, Stockholm (2003). In 2014 he was awared the Gannevik Art Prize and previously the Edstrandska Award in 2012, the Ljunggrenska Konstnärspriset in 2003 and the Carnegie Art Award (Best Emerging Young Artist) in 2006. The Carnegie Art Award exhibition toured extensively internationally. Recently he participated in group exhibitions at Museum für Gegenwartskunst, Siegen (2014), Göteborgs Konstmuseum (2011), Musée d’Art Moderne de Saint-Étienne Metropole (2009), MART Trento e Rovereto (2008) and Den Frie Centre of Contemporary Art, Kopenhagen (2007) among others.
www.nordenhake.com