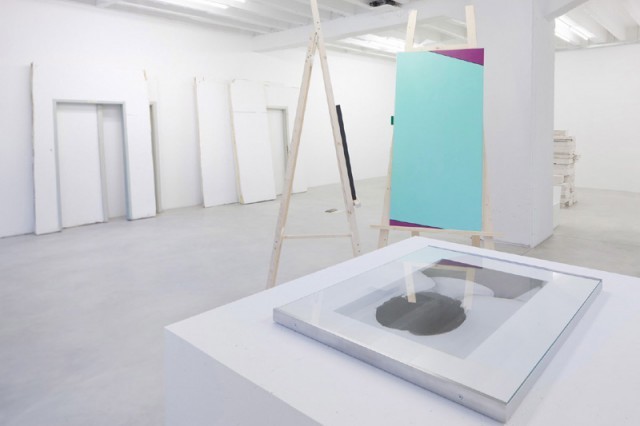 Galerie Nordenhake has the great pleasure to present a group exhibition curated by Günter Umberg, an artist who has been working with the gallery since many years. Umberg started in the 1980s to realize curatorial projects and installations to enable an enhanced understanding of his highly specific approach to art in general as well as of his own, mostly green or black monochrome paintings in particular. In his exhibition titled “Inversion” he brings together existing works by artist of different generations, who are represented by the gallery. In spite of the fact that the exhibition includes images and photographs in addition to sculptures and installations, Umberg focuses primarily on the sculptural aspects of the works. By presenting the relatively heterogeneous works in well considered, often surprising installations and placements, he unfolds a dynamic dialog between the works as well as with the viewer.

The German term “Umstülpung” —roughly translated as “Inversion” — refers to an action, where the inside is turned out and vice versa. Umberg applies the term in this general meaning and is explicitly not interested in any other philosophical, artist or political ideas associated with it. As title for the exhibition “Inversion” describes a curatorial guideline as well as Umberg’s artistic practice.

Though employing different approaches and modes of expression all works in the exhibition share the quality of transcending their everyday materials or subjects. They are open to interpretation and thus allow the viewer complex aesthetic experiences. Umberg encourages the viewer to perceive the works unobstructed by any preconceived notions and concepts or approved art-historical knowledge. He —figuratively speaking— “inverts” the works, i.e. he deliberately presents them in unusual modes or as sculptures to make their specific aesthetical properties become more apparent. He, for instance, displays a single photograph from Michael Schmidt’s series “Frauen” (Women) lying flat on a wooden pedestal, or conceives highly uncommon constellations of works that seem to be hugely unrelated. Like John Coplans’ self-portrait of his feet which is shown alongside one of Olle Baertling’s larger scale geometric-abstractions. The images are installed on oversized easels of different sizes and placed facing each other.

“Inversion” in its meaning of turning the inside out also acts a metaphor for an artistic practice. For Umberg art is a product of the whole body. It is a mental as well as physical process that passes through the entire body and manifests itself as an artwork. Umberg achieves the dense, deep and rigorously non-figurative surfaces, that are so peculiar to his art, in a meticulous and repetitive process by applying up to 100 layers of pure dry pigment over the course of weeks or month. His paintings are thus a personal expression of his painterly actions. Without reference to anything outside the painting’s materials they enable for direct interaction with the surrounding space and the viewer.

“We understand seeing too much as a thought process instead of appropriating it bodily”, Umberg explains. “The observer should be active, aware and present, speechless, and open to recognition.”
www.nordenhake.com