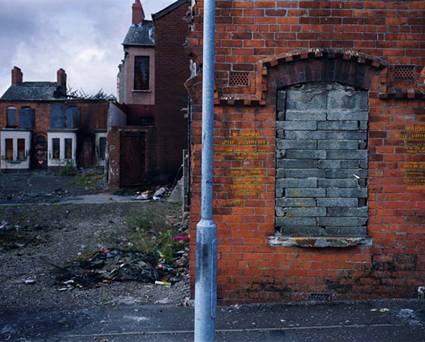 Galerie Nordenhake is pleased to welcome Willie Doherty back to Berlin with the exhibition "Apparatus", our first solo show with him. The artist, born in Derry, Northern Ireland, in 1959, presents a suite of forty new photographic works together with a video installation called "Closure". Doherty's artistic practice is rooted in the history of Northern Ireland, and much of his work refers to undercurrents of fear, oppression and uncertainty that have been the daily experience of everyday life there over the last three decades. However, his photographs and films convey a timeless quality and carry a broader significance. While still based on his daily experience of division, his recent art has begun to transcend its political specifics to explore wider notions of representation, identity, memory and truth. His work reveals a deep mistrust of the journalistic approach. Through photography and video he adopts documentary codes and the strategies of film noir cinema to undermine the boundaries of truth and fiction and creates highly poignant open-ended narratives.

In the main gallery hangs Doherty's new series "Apparatus". The photographs reveal devastated areas of Belfast, where the ongoing sectarian violence has lead to ghettoisation and segregation. The pictures of deserted streets and blighted urban landscapes - blocked roads and abandoned houses - were made over the last year. Whilst presenting information on poverty of social and economic deprivation, the viewer is allowed to relish the aesthetic pleasure of the detail and texture of a painted wall. At first glance, the photographs appear to adopt a documentary mode but owe more to the tradition of landscape photography. His photographs are visually anonymous. They shift between representation and abstraction, panoramic and close-up.

In the backspace, the video installation "Closure" shows a woman in a black coat seemingly trapped in a walled compound. She defiantly paces the space but her attention is on something beyond her immediate confines. The place echoes the architecture presented by the photographs but again moves the concern beyond the documentary. The work oscillates between the real and the imaginary. While examining this enigmatic woman a voiceover describes the breakdown of the fabric of a house but also reaffirms the female figure's defiance and commitment to an unspecified cause. Her movement and presence are transformed into an act of resistance. By articulating dual meanings through the subtle balancing of the visuals and the soundtrack, "Closure" moves beyond any definition of the woman's character as victim. In his work Doherty is forcing the viewer to move beyond the surface of the image to interrogate the representation of "truth". His works addresses the legitimacy of any position that ensnares the self in fixed categories of identity and difference and how such identities become encrypted in representations of place.