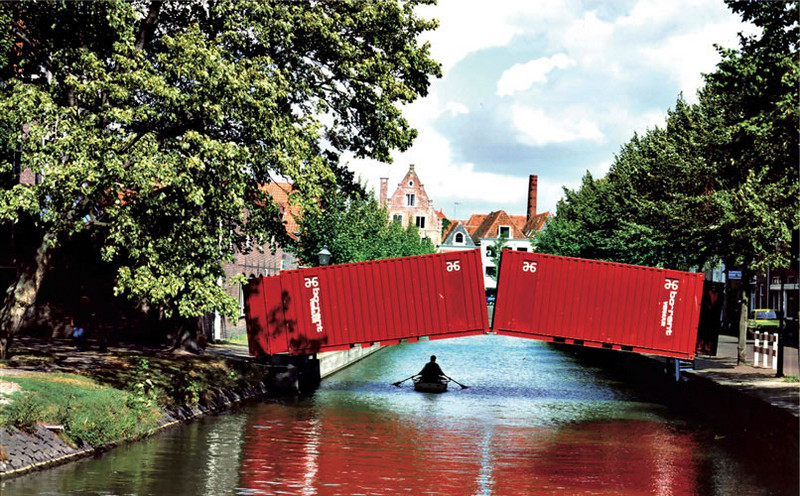 Containers tell the world how well or how poorly the global economy is doing. Empty container ships indicate a downturn; fully loaded container ships—or orders for new, even bigger ships—are euphoriant symbols of better times. The container itself, which is 2.44 metres wide, 2.59 metres high, and either 6.06 or 12.192 meters long, has been the globally standardized transportation module since 1956. Thirty million of them can be found on the seas and oceans of the world. Now the container is also a source of fascination for many architects. The NRW-Forum Düsseldorf invited renowned architects, designers, and artists from around the world to submit designs for container architecture. The response was overwhelming. Submissions included not only existing container buildings, but also new designs that were created specially for the exhibition: original, practicable, fictitious, sensible, fantastic, minimalist, exotic, pragmatic, futuristic—the breadth of submissions was very wide. Two dozen of these designs have been reconstructed as models on a scale of 1:5 for the ‘Container Architecture’ exhibition; the highest of the models breaks through the ceiling of the museum. Over 100 designs were submitted for consideration and every one of them will be included in a frieze of pictures running around the walls of the exhibition space. A catalogue of the exhibition will be published.

But why organize an exhibition about containers? ‘Containers are a symbol of the way we live and dwell in our globalized, mobile, nomadic age,’ says exhibition organizer Werner Lippert when asked to explain what gave him the idea for the exhibition. He also quotes ethnologist Hartmut Böhme, who described the container as a ‘fetish of the modern age’ that stands for cataclysm, mobility, and change. For architecture critic and urban planner Dieter Hoffmann-Axthelm, ‘the container is the building type of the near future’. The exhibition highlights the container as the pictogram for a new, urban way of life and/or simultaneously as an object of modern architecture.

Freight containers are now being used to create entire student residences, prize-winning homes, and cruise terminals. They are perched as penthouses on New York rooftops or as parasitic architectural works on the roofscape of San Francisco. They are stacked on top of each other to create residential buildings in London or high-rise apartment blocks in Melbourne. Designers are turning them into mobile homes or spectacular holiday homes. Artists are designing and realizing projects in and with containers. For example, one is used as a walk-in sculpture that doubles as a bridge over a river. The container is being used as a micro-house, as a building that can provide accommodation at short notice when homes are in short supply or during catastrophes, as a temporary building, as a travelling brand store ... in short, the container is an idea with a promising future.

In particular it is artists who refute the claim that while containers do indeed symbolize mobility in our age, they are—once they are used as a home—as stationary a building as any other. In one exhibition submission, artists took a trip on a ‘container raft’, allowing themselves to drift downstream to the sea. In another, the ‘container ship hotel’ used partially loaded container ships as temporary ‘cruise ships of a rather different kind’ on their cruise around the seven seas.

Containers are used as museums at biennales and as exhibition boxes for a video exhibition at the ZKM in Karlsruhe; 150 of them are currently being used to set up the Indian polar station, and one is being used as a ‘library in the ice’, a reading room and sanctuary to which scientists at the Alfred Wegener Institute in the Antarctic can withdraw. The ‘Push Button Mobile Museum’, which was developed for UNESCO, will tour Africa with an exhibition of artworks in ‘child format’ by artists such as Paul McCarthy, James Turrell, Carsten Höller, and others.

However, containers are also used as the building blocks for luxurious, comfortable homes such as the ‘Quikhouse’, which can cost up to US$175,000 and features a fireplace, stainless-steel kitchen, and lighting from the top light designer Ingo Maurer. Alternatively, they can be used for the ecologically correct ‘Eco-540 Dwelling’ in Tampa, Florida, which is topped with wind turbines. ... The Seacan Cabins in Costa Rica, which use inexpensive containers as homes, on the other hand, are not a luxury; they are indispensible. Bowing to necessity, all of the sections that have been cut out of the container walls (e.g. for windows and doors) are all either re-used or recycled down to the very last scrap of sheet metal.

Its modular nature, universal shippability, ready availability, and sustainability means that the container is predestined to be used for emergency accommodation or welfare housing. Examples of such housing are the ‘Future Shack’ or ’1 Unit’, a high-tech design using a mobile emergency container with everything needed for autarkic operation, or the ‘Katrina House’, a hypothetical design for the Pink Project, whose patron is Brad Pitt and which is fostering the swift reconstruction of residential areas in New Orleans destroyed by Hurricane Katrina.

Containers also function as sales rooms. Take, for example, ‘Puma City’, which has travelled around the world, or the ‘Freitag Flagship Store’, which was awarded the Design Prize of the Federal Republic of Germany. The original is situated at Zurich Railway Freight Terminal, but a copy pierces the ceiling of the exhibition area at the NRW-Forum.

Standardized, robust, stackable, and available all over the world, inexpensive, easy to erect and dismantle, cheap and sustainable—containers are all this and more: they are symbolic of our era. It is no wonder, therefore, that architects, designers, and artists in all four corners of the globe are excited by what containers have to offer. The ‘Container Architecture’ exhibition at the NRW-Forum Düsseldorf aims to offer a fascinating overview of what is possible. The catalogue, which will be over 400 pages long, will bring together all 114 projects included in the exhibition.

To coincide with the exhibition, the Chamber of Architects in NRW will be organizing a series of lectures on containers and architecture by renowned experts.

The exhibition is supported by the Ministry of Economics, Energy, Building, Housing, and Transport of the state of North Rhine-Westphalia and by the Initiative Stadtbaukultur (Urban Building Culture Initiative).
www.nrw-forum.de