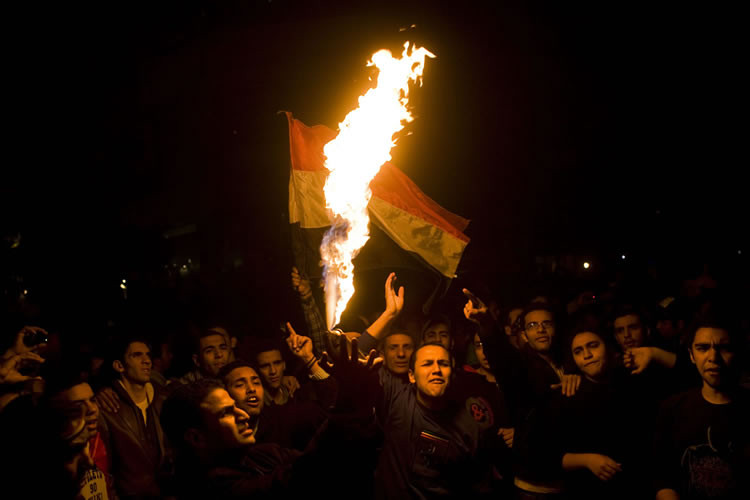 Cairo. February 12, 2011
Anti Mubarak protesters light aerosol cans on fire after the announcement of President Hosni Mubarak’s resignation in Tahrir Square.
© Dominic Nahr/Magnum Photos
This photo is one of the most iconic photos in the world and is etched deeply in people’s memories: a soldier, his arms thrown backwards as he falls, his rifle sliding out of his grasp, has just been hit by the bullet that will end his life. In this photo, which is entitled ‘Death of a Loyalist Militiaman’ and was taken during the Spanish Civil War in 1936, the photographer Robert Capa captures the quintessence of all wars. One could say that this photo and the photos subsequently taken by Robert Capa and the triumvirate of George Rodger, Henri Cartier-Bresson, and David Seymour both during this war and on the horrifying battle-fields and in the places of desperation of the Second World War mark the start of war reporting through photography.

In her 2003 book Regarding the Pain of Others, Susan Sontag, who was critical of war photography in her early essays, revised her previous opinion that people become immune when exposed to pictures of violence and war. She also emphasised the ability of such photographs to make an appeal: ‘The image says “put an end to this; intervene, take action”. This is the decisive, the correct reaction.’ Sontag also went on to describe war photography as a ‘common language for suffering and disaster.’ Because of a succession of larger and smaller conflicts and wars around the world, we are all too familiar with this language. Moreover, with the disturbing images of the so-called ‘Arabellion’, it is a language that has recently once again become a standard feature on the title pages of major daily newspapers and magazines around the world.

Once again, this raises the question as to whether photos can end wars and crises, can be a wake-up call to the international public. The ‘Frontline’ exhibition would like to address this question using the work of nine photographers from the world famous Magnum photo agency.

The afore-mentioned photo of the Spanish loyalist by Robert Capa is one of 200 photographs included in the exhibition. The photos in the NRW-Forum’s ‘Frontline’ exhibition range from the war photos taken by Magnum founders Robert Capa, George Rodger, Henri Cartier-Bresson, and David Seymour, many of which are now considered historic and have often been called icons of photography, to those taken by the young generation of Magnum photographers: Thomas Dworzak, Dominic Nahr, Moises Saman, Peter van Agtmael, and Alex Majoli. These young photographers take photos at the hot spots of today’s world, provide up-to-the-minute photos of the revolts against oppressive regimes in the countries of the Arab world, and are already on their way to new fronts.

Magnum Photos was founded by Capa, Cartier-Bresson, Rodger, and Seymour in 1947. By establishing their own photo agency, the four photographers opened up a new chapter in the history of photojournalism. This was the first time photographers had joined forces to set up an agency in order to produce, control, and market their own work with a view to ensuring themselves a degree of independence from the media.

Their prestige was that they were the most successful war photographers of their day; their goal was the humanistic idea of the photographer’s sense of responsibility and respect for the world, the people in it, and their suffering. Their idea was to give the world photos with an instructional side to them; to take photographs that were so striking that they would challenge the beholder to take a stance, just as Susan Sontag felt they should.

In the early days of Magnum Photos, the lion’s share of these photos were of the Second World War and the Spanish Civil War. The ‘Frontline’ exhibition includes a number of photographs from this era by Magnum founders Capa, Rodger, and Seymour as well as the films ‘Victoire de la vie’, ‘L’Espagne vivra’, and ‘Le Retour’ by Henri Cartier-Bresson.

Robert Capa once said: ‘If your pictures aren’t good enough, you’re not close enough!’ This awareness of the need for photo reporters to get close to their subjects is still evident in the young generation of Magnum photographers. The photos of the very recent events in Libya, Egypt, Tunisia, and Iraq included in the exhibition show that this generation of photographers is also striving to reach the humanistic goals set by the agency’s founders.

These photographs, which were shot by five young Magnum photographers, are incredibly recent. Unlike the photos by Capa, Seymour, Rodgers, and Cartier-Bresson, they are not yet rooted in history or set in a historical context; they have not yet become icons in the world’s visual memory. The images from the Libyan war and from the locations of the ‘Arabellion’ that are reaching the media are incredible. These are new, different images; images that have emerged out of the events that are shaping our time: young Arabs with smartphones and laptops surrounded by chaos, mass rebellions that have been organised by text message and are taking place at great personal risk ...

The Internet makes sure that more images than ever before now reach us. In addition to photographs taken by professional photo reporters, we are now encountering amateur photos taken using mobile phones and then disseminated at incredible speed via blogs and social networks. At the exhibition, a blog-wall (the content of which will kindly be provided by Deutsche Welle) will reflect this new media reality in the world’s hot spots and will highlight the most important blogs on the young Arab blogging scene.

Once again, this raises the question as to whether photos can influence, accelerate, or end wars and crises. Can they act as a wake-up call to the international public? A panel of photographers, bloggers, and photo historians will address these questions in a podium discussion on 23 September. The discussion will be chaired by editor-in-chief of the political monthly magazine CICERO, Dr Michael Naumann.

This exhibition is organised in cooperation with Magnum Photos, Paris. Because the subject matter of the exhibition is so topical, a new, comprehensive edition of the NRW-Forum magazine KRAUT will be produced instead of an exhibition catalogue. It will include very recent interviews with the young photographers featuring in the exhibition. These interviews will also be available as video portraits during the exhibition and on the Internet.

‘Frontline’ is the latest in a series of NRW-Forum exhibitions on war and crisis photography. Other past exhibitions include ‘Requiem’ (2000), which featured the work of 200 war photographers who were killed in the line of work (including Robert Capa and David Seymour), ‘Here is New York’ (2002), an exhibition about anonymous images of the terrorist attacks on the Twin Towers one year after the event, and ‘(Tat)Orte’ (2006), which included images of the everyday war on our streets by Weegee, Arnold Odermatt, and Enrique Metinides, and from the LA Police Archive.
www.nrw-forum.de