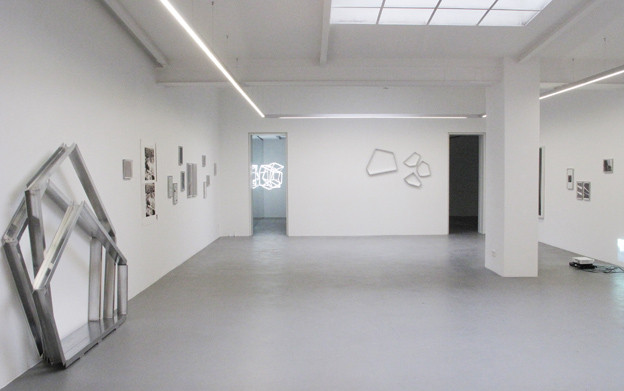 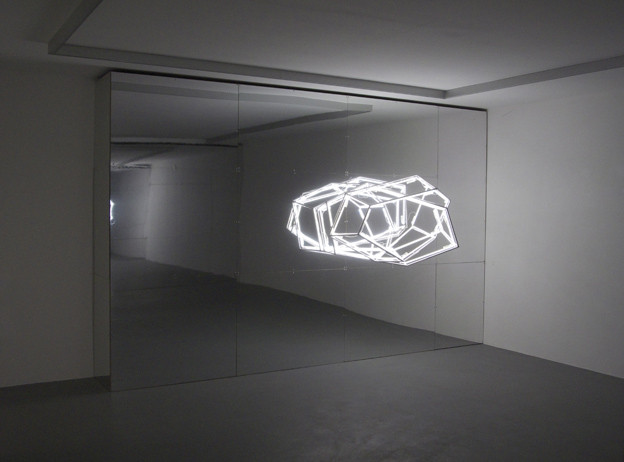 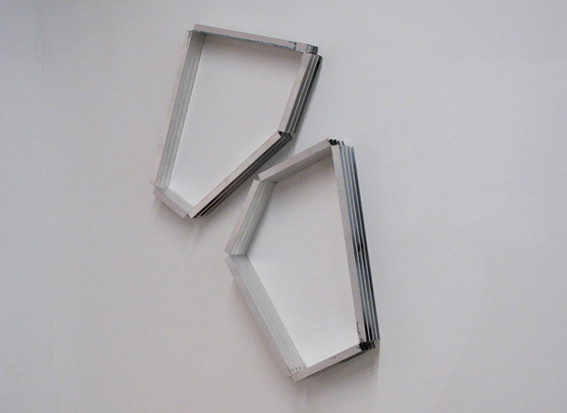 flexions, 2010
Nusser & Baumgart is pleased to present new works by the sculptor Albert Weis (born in Passau in 1969) at the comprehensive solo exhibition parade. As the Berlin-based artist noted prior to its opening, this exhibition “traces the long path from Dürer via Giacometti to Gropiusstadt and the Berlin Philharmonic by Scharoun”. And yet the exhibition doesn’t appear burdened by the heavy luggage of half a millennium of art and architectural history. The abstract aluminium and neon structures, the folded and screentone layered paper and photo works, and the video installation seem rather to absolve their “parade” light-footedly.


Common to all works is the rather cool, indeterminate modern aesthetic that curiously remains ambiguous while still obviously following similar principles. The “folding” motif—several overlapping layers that give rise to complexity—returns again and again, suggesting that here we are dealing with spatial and architectural references and structures. In addition to the photographic works dedicated to Hans Scharoun’s legendary Berlin Philharmonic, which was constructed from 1960 to 1963, the video parade and the like-named screentoned photos showing images of Gropiusstadt in Berlin also directly hint at the architectural theme. Gropiusstadt, the satellite city constructed by Bruno Taut during the 60s and 70s as an extension to the Horseshoe Development (“Hufeisensiedlung”), quickly lapsed into social decline after its completion, illustrating the dilemma of modernity, whose ideals are often betrayed when they are realized in an inappropriate manner, thus discrediting the project of modernity.

The leitmotif of modernity’s ideals and utopias is also the focus of Albert Weis’s works. He is neither interested in the melancholic view of the immaculate aesthetics manifested in famous modern buildings, nor does he attempt to illustrate critically the failure of such utopias from the perspective of later generations. His vision is much more focused upon the structures that can be interpreted as the building blocks, the formal skeleton, of modernity. One prominent example of such a system is the Modulor developed by Le Corbusier between 1942 and 1955 - a proportional system combining anthropometric scale with the ideal proportions of the Golden Ratio, thus creating a relationship between human size and mathematical order. This system of proportion—the Modulor upon which Le Corbusier based all his buildings—provided the point of departure for Albert Weis’s abstract aluminium works, the flexions: edgy aluminium shapes that have been sawn at various intervals and bent to form crystalline structures. Their total length and the proportions of their pieces correspond to the scales of the Modulor. But by varying the progression of the proportions, Weis creates ever new individual forms that both contradict and rupture the strict repetition of sameness Le Corbusier practiced.

The installation coupes - two identical neon structures, diagonally reflecting and interlocking with each other and presented in front of two wall mirrors—also has its roots in modernity. The installation alludes to Alberto Giacommetti’s only abstract sculpture of 1934, the Cube, which itself was loosely based upon the polyhedron in Albrecht Dürer’s equally famous and enigmatic copperplate engraving Melancolia I of 1514, where the rational world of science is merged with the imaginative sphere of art. The self-contained physicality of form in both Dürer’s and Giacometti’s work becomes an open structure in Weis’s work, it’s contours rendered seemingly immaterial by the light of the neon tubes and the pair of wall mirrors that reflect the sculpture endlessly, thus transporting it into infinite space. Both of these features—both the structural openness and the motif of infiniteness and boundlessness—again allude to the origins of this sculpture: modernity and its utopias.

In his works Albert Weis designs complex, multifaceted referential systems with which he investigates the principles of modernity—however ideal or rigid some of those principles may be—analysing and reformulating them in new works. In them one can still sense the utopian moments of time to which they refer. And yet, by denying any clear function, they transform the now purely historical utopia into structures which, in their openness, relocate to the present that ideal moment in abstract form. And thus the potential of modernity is rendered once again productive in the present, yet without adopting its ideals naively and uncritically. Quite the reverse: Weis’s view of modernity is never one-sided, and thus its ruptures and imperfections are manifest, although, in his works, they are not disqualified as a sinful fall; rather, they are embraced as an opportunity.