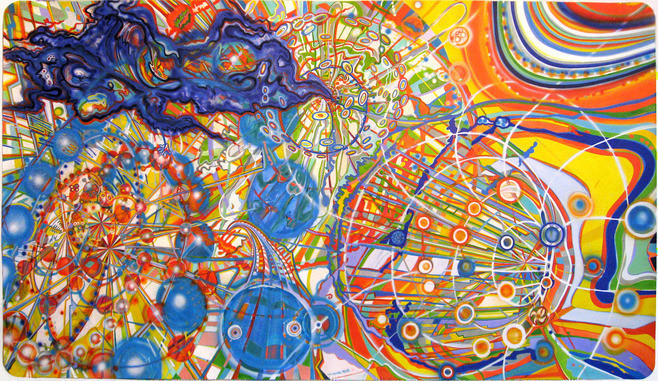 The double exhibition POP – Possibility of Perception, to which the Galerie Nusser & Baumgart cordially invites you, will be presenting works by the New York based artist Ati Maier (born in 1962 in Munich) and Joe Amrhein (born in 1953 in Sacramento, California). These two artists offer widely diverging perspectives from the currently so vibrant field of contemporary painting: on the one hand, Ati Maier’s utterly exuberant, colour-intensive and moving pictorial language; and, on the other hand, Joe Amrhein’s precisely poised and intellectually ironical linguistic pictures.

Ati Maier grew up in Munich. Here she came under the influence of Franz Marc and August Macke’s colour schemes, before she moved to the United States and grew acquainted with the endless vistas of the American West. In her multi-perspective fantasy landscapes she ignites a veritable firework of virtuoso pictorial inventions and discoveries. In her complex, often many layered works she uses the endless varieties of information available today and adopts illustrations from various sources—from geography, geology, physics, or from comics and space research—which she then takes as a point of departure for her combinatorial microcosmic and macrocosmic landscapes. The viewer is cast upon a journey through space and time, reminiscent of a science fiction adventure. The association is underscored through 3-D animation, which Ati Maier has been developing for some time parallel to her two-dimensional works. Much as in a computer game, the viewer can delve into and even move around within the invented worlds Maier has created out of images from her previous works or from entirely independent works. This of course piques the discoverer’s desire to embark on an expedition, and the exhibition visitors are encouraged to join the pictorial pioneer Ati Maier on a voyage to ever new sights.

A qualified sign-painter and dynamic gallerist, Joe Amrhein is a man of many talents. As the founder of the Pierogi Gallery in Brooklyn, he has helped decisively since 1994 to make the area around the Williamsburg Bridge such a hip place. He uses his talents, not without a good dose of humour, to confront the art world, in his text-images, with its own occasionally meaningless verbal contraptions. The fonts he uses are familiar to us from advertising and billboards, and they underscore the seduction inherent in the vocabulary and the widespread use of “art-speak”: a seduction illustrated here in the prattle about “the fictionality of fiction” or “the pre-postmodernist cool”. At the same time, Amrhein infiltrates and undermines the ostensible functionality of well-honed phrases by placing the words over each other; thus fragmented, they lose—partially or entirely—their legibility. One’s attention is thus almost inevitably shifted to the graphic and colour qualities of the works, so that the purported message is ultimately transformed back into an image.

The exhibition POP – Possibility of Perception thus presents a broad spectrum of possibilities for perception, from Joe Amrhein’s Babylonian ‘art world’ of linguistic confusion to Ati Maier’s richly allusive artistic world - both an invitation to observe and reflect.