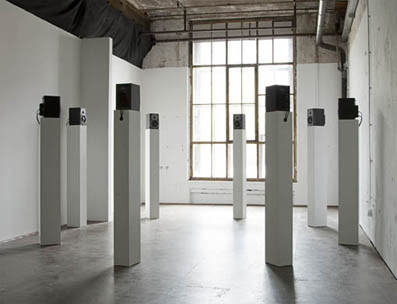 In our „Spot°Light“ focus is put on Julius Heinemann who shares a connection with Daniel Man as the two artists have realized a wall drawing for the current exhibition; beyond that both artists question the constitution and ability of experience of space and venue.
Heinemann was born in Munich in 1984, he initially studied at the Hochschule in Essen (photography). Since 2008 he continues his studies at the Hochschule für Graphik und Buchkunst in Leipzig.

In his photographies, videos and installations Heinemann visualizes the entanglement of space and time: the artist focusses on the breaches and incongruity of spatial and temporal processes in particular and thereby reveals the relativity of both factors. This also applies to the installation „Aria“ (2009): eight speakers are placed on sockets which are arranged in a circle. Eight different interpretations of the Goldberg Variation by Johann Sebastian Bach can be heard. All recordings of the composition begin simultaneously but this initial synchronization is only of short duration. The tempo of the various interpreters is too different, each adaption of the score develops ist own pace.
A polyphonic overall develops, in which every once and again, certain parts become distinctive, then dissapear, only to reappear from adifferent direction, almost like an echo. Harmony and disharmony alternate and only dissipate after some of the musicians fall silent and the final measures are performed from a single player, at which point they all commence again.
www.nusserbaumgart.com