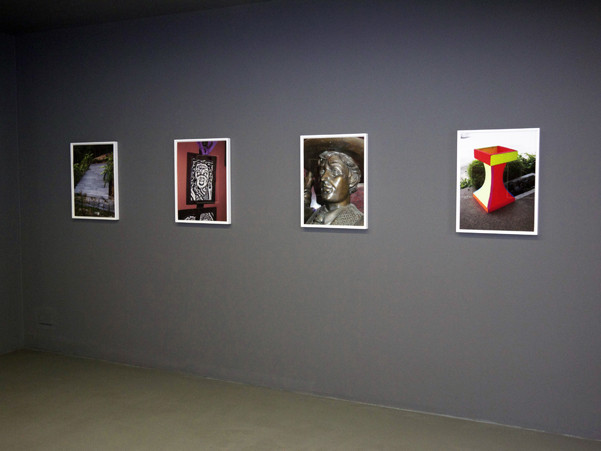 Nusser & Baumgart presents “Puff the magic dragon”, the first solo exhibition of works by the artist Martin Fengel.
The show is divided thematically into two parts, including new works from this and last year. Accompanying to the exhibition two catalogues will be published.

Under the title “Wachs (Wax)” are a series of works that Fengel began in 2011. With this series, the artist explores the use of wax as a material, dealing with a variety of associations that arise in the process. On the one hand, the works describe an allegory relating to the hippie culture of the 1960s, a time when candles were essential requisites of the spiritual-esoteric scene. The meditative creative process through which the sculptures are built up, drip by drip, are reminiscent of the lifestyle that was characterized by mind-expanding drugs.

On the other hand, Fengel also establishes a cross reference to the rediscovery of wax in American Pop Art, which appeared at approximately the same time. After the encaustic painting of late antiquity was replaced by tempera and later by oil painting, the technique first enjoyed a revival by, for example, the artist Jasper Johns in the 1950s. Through the liquefied and quick-drying wax, special surface qualities and a particular coloration emerge. A connection to the then revolutionary drip paintings is also apparent: Martin Fengel has taken the idea behind drip painting a step further to the creation of drip sculptures. The abstract forms arise not through conscious intervention by the artist, but solely through the shifting of the varying aggregate states. The wax is again and again dripped, new layers are added and already existing forms are transformed through the heat build-up. This temporary changeability is an essential aspect, during which, in every phase of the creative process, individual artworks arise and, under the different layers, the sculptures of earlier phases remain extant.
By showing only photos of the sculptures in the exhibition, Fengel contrasts the element of constant change with the medium of photography. The temporary changeability, which is so characteristic of the sculptures, no longer plays a role for the photographs. The various phases are permanently captured in the photos, and the hidden works under the layers are made visible for the viewer. At the same time, this approach underscores the transience of the wax sculptures that materialize during their creation: They exist only in the photographic images.

The story that Martin Fengel tells in the other part of the exhibition takes place away from civilization, and deals with the dark deeds of a weird sect. The presented motifs are connected with each other through strangeness and the bizarre. The works put forward a claim that is confirmed in an accompanying text by the author Georg M. Oswald. Although here too there is a clear connection to hippie culture, inspirational sources also include horror and fantasy comics of the 1950s or the work of H.P. Lovecraft. The photos depict reality-based motifs that the artist then assembles to form a hypothetical setting. In addition to photography, posters and the smell of cannabis are intended to establish the scenario more accurately.

In addition to the exhibition, further works by the artist can be seen in Museum VILLA STUCK. On the occasion of its
20th anniversary, Martin Fengel has been invited to accompany the museum throughout the year. Each week, Fengel will hang a new photographic work in the entrance hall. Under the title “Wachs (Wax)”, the exhibition is intended to continually enhance and redesign the exhibit space.
Moreover, during the year, there will be four music events in which Fengel will cover the spectrum between jazz, classical, folkloric and disco.