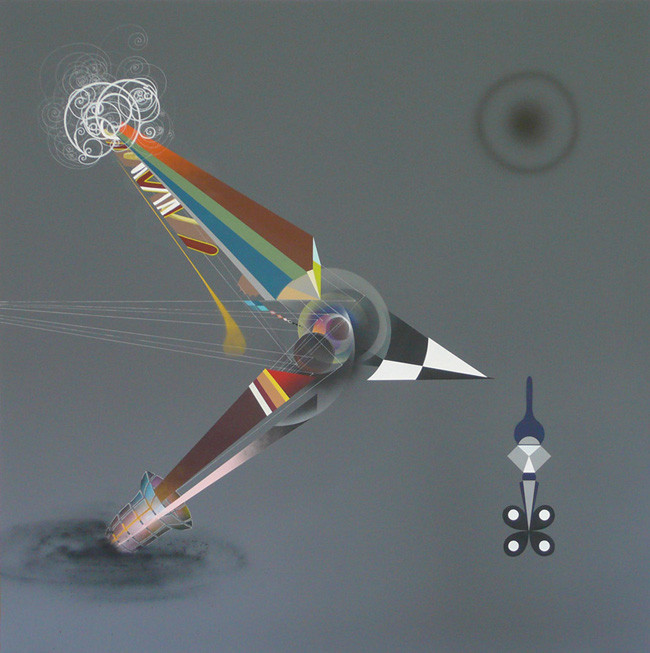 Nusser & Baumgart is delighted to show recent works by London born artist Daniel Man (*1969) in a special format, entitled spot°light, which intends to propose new positions and/or is understood as a focus on particular work or series of works of an artist.

The process of creating is a main focus in Daniel Man’s art. In this presentation the beholder is confronted with the result of a long process in which the artist deals with questions related to aesthetics, space and symbolism. In exhibited works on paper the process is only visible at a second glance. Under the black background of the works you can glimpse earlier forms and contours. The artist adopts the method of subtraction as it is applied in sculpture, using it on two dimensional paper work. Step by step he eliminates previous material through layers of black paint. What remains are abstract objects whose individual forms arise ex negativo - defined by the non-being surrounding them.

This antithetic approach is a characteristic aspect of Daniel Man’s oeuvre. Again and again the artist, who initially was very active in Graffiti/Urban Art, searches for interstices and interfaces. The tension between unambiguousness and vagueness is, for Daniel Man, a driving force. Although he often uses the symbols of popular belief, customs and traditions in his works, their original models appear again and again fractured and alienated. Daniel Man is interested not only in the mysticism arising from these symbolic images, but also in their ambiguity in various cultural systems. Just as a number can be used for anonymous communication, the artist takes these symbols out of their context and develops their universal interpretive claim.

The black flag Man is showing at the exhibition illustrates this interest in traditions and symbols. Already in ancient times flags were used as symbols of one’s clan or as a troop’s standards, and they reoccurred commonly in military contexts—often consecrated by the church and stored in a particular manner. Over time—especially with the advance of modernity—the use of flags grew more and more diverse, developing from a weapon of war to one of the most popular carriers of advertising. Today flags are so prominent in large urban cities that we hardly notice them and note how they have emancipated themselves from their original context. Daniel Man robs his flags of their omniscience and confronts them with their folkish symbolism. At the centre of the carefully stitched image one can see the contours of a turtle, an image that is charged (both in Chinese and in Western culture) with symbolism.

With a flag hanging in the room, Man’s attentiveness to spatiality is more than apparent. The motif sewn onto the flag and the material itself are both two dimensional. Hanging on a mast, the textile becomes a flag, and thus a space-occupying object. This also creates a tension that opens up correlations to his earlier artistic creativity. As a former graffiti artist he attempted, in two dimensional images, to attain a three dimensional effect as realistically as possible by carefully applying shadows and perspective. He developed further this interest in spatiality while simultaneously avoiding clear categorisation.


The large mirror work also deals with the possibilities of dimensionality and with Man’s past as a graffiti artist; but, at the same time, the working method here is also accentuated. The forms and patterns do not follow any preconceived model. The work was created over a long period of time, and the sense of its completion arose out of an unconscious feeling rather than from a definitive conviction. Like the intention underlying the écriture automatique introduced by the surrealists, a high level of authenticity and immediacy is evident in this work. The artist uses the sgraffito technique upon a mirror (sgraffito was a historically well-established technique used to adorn walls by ‘scratching away’ the surface; from this technique the term graffiti was derived); the result here is an effect that plays with both light and reflection. It is characteristic for Daniel Man that he is also interested in the reverse side of the work; here, due to the matt layer applied, the effect of the surface is entirely different. The back of the work obviously carries the traces of the artist’s hand—the brittle, uneven surface contains complex, unsystematic structures. The black mountain-climbing rope with hangman’s knots in it, to which the mirror is attached, shows once again that, in his works, Daniel Man is interested in contradictions.