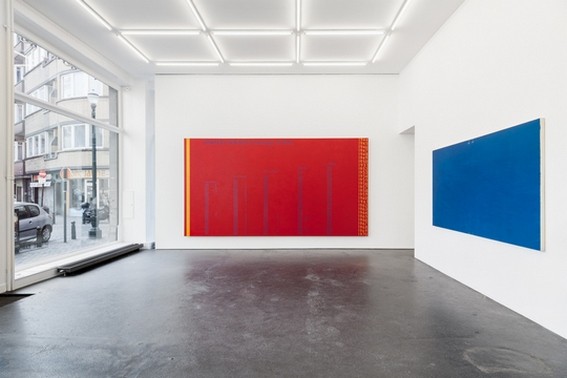 Office Baroque is honored to present David Diao’s exhibition, Ref: Barnett Newman. Since 1990 Diao has painted twenty-eight works, and counting, related to seminal American Abstract Expressionist painter Barnett Newman (1905-1970). This will be the first gallery exhibition of work from this series, four of which in the FRAC Collection, were last exhibited in 2007 at le Quartier, the Center for Contemporary Art in Quimper, France. One of the paintings that FRAC acquired, the monumental Barnett Newman: Chronology of Work (1992), will be on view alongside new works that take up this subject.

Diao’s sustained investigation of Newman’s work represents a focused cross-section of the artist’s ongoing interest in the ways that art history has been created, both through the art works that enter its canon, and the contexts—institutional, financial, discursive, and personal—that shape it. As such, many of the works in the exhibition take as their subject topics such as the catalogue of Newman’s works, paintings that have been excluded from the artist’s narrative for one reason or another, the graphic design of catalogues in which it has been featured, and the artist’s biography. These many facets of Diao’s over twenty-five year exploration of Newman in turn enable the viewer to consider these mechanics, not only of the apparatus of the art system, but also of both the aspirations and realities of abstract painting, of which Newman is a well-established father figure.

Diao also embeds his stance, at once both critical and reverential, at the level of the how the paintings are made, and in turn perceived. The grounds of these paintings—as is typical of his work—are tightly honed. Executed in layers of acrylic that Diao painstakingly lays on by hand with a knife, they are monochromatic and not expressive in any conventional sense, while also revealing the presence of the artist’s hand, which is betrayed by the painterly incident that is evident upon close examination. The vagaries in this surface catches the light at different angles and eases the otherwise mechanical effect of the paintings, much like Newman’s own matter-of-fact, but still luminous handling of paint.

This is sharply contrasted with the textual elements that Diao designs on the computer and has commercially printed in vinyl. This serves to highlight the kinds of dialectics that obtain in this history—between the hand- and machine-made, commercial production and artistic contexts. The individual ones of artists, such as Diao and Newman but also, by extension, the viewer, who encounters Newman’s paintings at different historical moments, and contexts, including in that created for them by Diao’s paintings.

The way that Diao’s technique both allows the viewer entry and keeps him or her at bay instills a critical distance that enables the viewer to carefully consider the role not only of Newman, but of abstract art and its utopic aspirations, both historically and in the present.

David Diao (1943, China) is one of the key figures in the history of conceptual painting during the second half of the twentieth century. Entering the New York art world in the late 1960s and throughout the 1970s, Diao first engaged, in his early work, in the complex position of painting in the aftermath of the Abstract Expressionists and the formalist critical debates that followed them, successfully pushing painting into conceptual territory while allowing him to deal with aesthetics, history as well as personal narrative in his painting. Diao’s unique aesthetic sensibility—manifest in his palette and surfaces as well as his historical and biographical interests—has undergirded a long career that is now attracting renewed interest from major institutions, critics, and curators around the world. Diao recently had a retrospective at the UCCA Ullens Center for Contemporary Art in Beijing and has had exhibitions at the Aldrich Museum of Contemporary Art, Ridgefield; Marta Cervera, Madrid; Paula Cooper, New York; Office Baroque, Brussels; Tanya Leighton, Berlin and Postmasters, New York. Recent group exhibitions include Whitney Biennial 2014, ICA Philadelphia and Tate St Ives.

The exhibition will open on February 27 and will run through 9 April at our downtown gallery on Bloemenhofplein.

On the occassion of the opening of Ref: Barnett Newman Office Baroque is pleased to host an artist talk between David Diao and art historian Wouter Davidts on Saturday 27 February at 5pm.