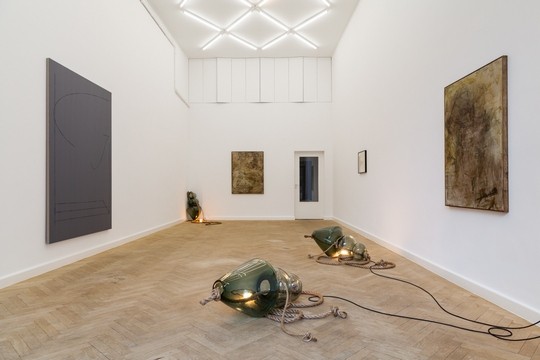 Office Baroque is pleased to announce Towards A Technical Being, the second solo exhibition with Kyle Thurman at the gallery. The exhibition at our midtown space, Ravensteinstraat 44 Rue Ravenstein, presents new sculptures, paintings, and drawings.

A group of glass sculptures take on the form of lighted buoys – presenting themselves as possible floating beacons that serve as navigational tools. The three glass pieces that complete each individual sculpture are fabricated referencing a drawing from Oskar Schlemmer’s time spent studying the human form in the place of the theater. The particular drawing, titled “technical organism” (ca. 1921), breaks down the human body into three main shapes – an oval representing the head, an oval representing the torso, and a cone representing the hips and legs. This three-part shape firstly diagrams the possibilities of the range of motion of the human body in space – spinning, tilting, expanding, contracting, etc. Secondly, this drawing considers the option of masking and transforming the actual shape and identity of the human body by employing costumes – allowing one to act or perform under a guise knowing their identity is concealed from the viewer. The interior surfaces of these glass sculptures are rubbed with Cephalopod ink – a product of the invertebrate’s nervous system that is released in order to veil their movements or to generate a pseudomorphic cloud – creating an uneven and discolored projection of light from these seemingly polished forms.

Also present in the exhibition is a new painting that uses twine to diagram both an architectural stage space and a potentially psychological space on the surface of the linen. Continuing a series that was introduced in London earlier this year, these linear compositions are created by employing an accumulation of references from fictional communal spaces that are depicted in films, paintings, and books. Each of these “stage” paintings is void of any structure in the center of the picture – suggesting the place of potential figures. The painting in this exhibition is titled:

STAGE (setting): a ferry (We had not seen land in days – today, I can barely make out some rugged mountains along the coast. The water is very phosphorescent, it appears as though a million stars are surrounding the boat – it is cool, but warm enough to sleep on deck. Behind those mountains, where I’ll go everyday.)

This exhibition continues the artist’s consideration of the results and consequences that occur with the manipulation and transformation of materials, both physical and informational, as they pass from person to person – where materials begin and where they end up, what remains present and what becomes absent. The specificity of materials that are employed for production, and their preexisting histories and functions, remains a central concern to the artist’s practice. A constellation of works within the exhibition begins to produce narratives and displaces the notion of a single author as they are placed in relation to one another.

Kyle Thurman was born in 1986 in West Chester, Pennsylvania, and currently lives and works in New York. He received his BA in both Film Studies and Visual Arts from Columbia University in 2009 and then studied as a guest student at the Kunstakademie Dusseldorf with Christopher Williams from 2010 to 2012. Most recently in 2015 he completed his MFA in painting at Bard College. Recent exhibitions include Heat Theater, Off Vendome (Dusseldorf), The Gentle Way (Judo), Clifton Benevento (New York), Three Cups Fragrance, Bodega (New York), On Kindness: Jacob Kassay & Kyle Thurman, MOCA Tucson (Tucson), Trust (Vita Vel Regula), Fluxia Gallery (Milan), Nuit Americaine, Office Baroque (Brussels), That Singing Voice, Galeria Marta Cervera (Madrid), Stay In Love, Laurel Gitlen & Lisa Cooley (New York). In the spring of 2016, Kyle Thurman will have a solo exhibition at Off Vendome (New York).
www.officebaroque.com