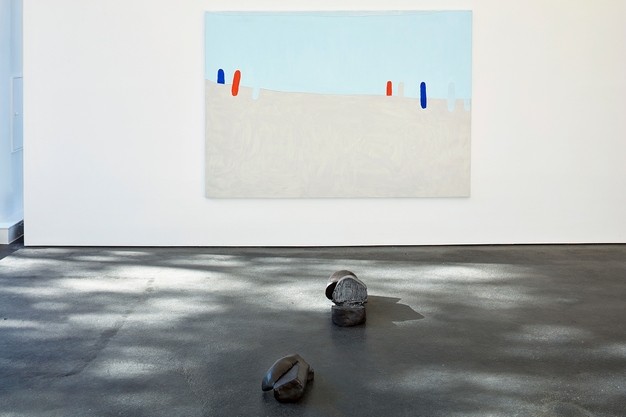 As a founder of Casa 7 in 1983, Paulo Monteiro belongs to a generation of Brazilian painters that emerged in the eighties and who celebrated a return to the canvas. Throughout the years, Monteiro has sought to create works that command attention through quiet means and humble scale, making use of paint, bronze, wood and clay. His use of the line – a constant throughout his work – has been the subject of continuous renewal and reinvention. At once painting and sculpture, his work is challenging preconceived notions of both practices.

For his solo at Office Baroque, Monteiro has questioned the differences and similarities between inside and outside, bringing together his abstract paintings, wall objects and sculptures in spatial arrangements throughout the gallery. The oil paintings are at once reductive and expressive, composed with subtle, interacting arrangements of color and trace, which Paulo applies with meticulous attention to the physical qualities of paint. Each mark, line or curve holds a wealth of references, yet the work’s elegance lies in its apparent simplicity. His sculptures, raw materials altered by intuitive gestures, relate to organic forms and shapes and have a special intimacy that derives from the physical characteristics of the medium itself. The visual themes of water, the horizon and the body run through Paulo’s work.

Since 2008 Monteiro has been taking ballet classes following the Cecchetti Method, a rigorous system drawn up with careful regard for the laws of anatomy, and designed to endow the human body with all those qualities essential to the dance: grace, balance, poise, strength, elevation and elasticity. These qualities are present in Paulo’s ongoing dialogue between the two-dimensional and the three- dimensional.

Concurrently with the exhibition in Brussels, Paulo Monteiro will be included in the group exhibition The Many And The One curated by Robert Storr at the Instituto Tomie Ohtake in Sao Paolo.
www.officebaroque.com