The Team I Can't Live Without 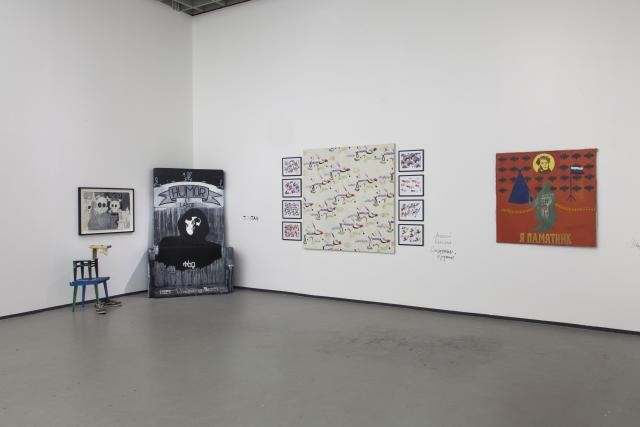 Regina Gallery presents an exhibition featuring some of today's most progressive Russian artists, curated by Mikhail Ovcharenko. The show will, for the first time, allow visitors a look inside several rooms that were previously reserved only for private gallery functions.

The exhibit will present some of the artists' new works as well as pieces created long ago and never before exhibited in Moscow. Such is the case with the works of two distinguished classics of Russian art and long-time members of Regina Gallery's team - Semyon Faibisovich and Ivan Chuikov. Their works were previously created for foreign exhibitions in the late 1980s and early 90s.

A focal point of the exhibition is the painting of Oleg Golosiy - 'Flying Hares'. Regina Gallery's emergence on the Moscow art scene is in large part due to this artist.

The latest work of Oleg Kulik, who contributed greatly to the Gallery's life in its beginning stages, represents a new creative period for the artist, and is dedicated to the theme 'Boundaries of the Image'.

A large section of the exhibition is devoted to artists whose most famous works were created in the early 2000s. Shows by these artists were in fact responsible for the Gallery's great success at that time. Victor Alimpiev, Sergey Bratkov, Sergey Zarva, Pavel Pepperstein, Maria Serebriakova and Natasha Struchkova - these names are well-known by anyone interested in contemporary Russian art. They will now present their latest works. In the near future, Regina Gallery plans to present a number of individual shows by many of these artists.

Another large part of the show is dedicated to the creative works of artists whose partnership with the Gallery began not that long ago, yet has already proven to be fruitful. Stas Volyazlovsky ironically compares the legendary 1980 Olympics to the coming winter Olympics in Sochi. Alexey Kallima reveals an unexpected side of himself in his never before seen series of graphic prints. Without a doubt, they will surprise anyone who is used to his typical work in charcoal and red chalk. Valery Chtak presents his new creations through which he reinvents items of furniture.

Egor Koshelev, Vlad Kulkov, Vladimir Logutov and the art duo EliKuka are all vivid representatives of the Gallery's youth component. They display new works, some of which were created specifically for this show.

The exhibition also features artists who are not currently represented by the Gallery, but whose works appealed to the show's curator. They are Konstantin Zvezdochetov, Alexander Lobanov, and Lera Nibiru.
www.ovcharenko.art