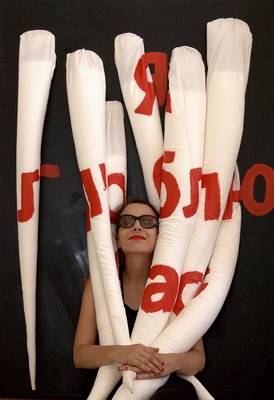 It would not be easy to encounter Zenita Komad with an attitude of indifference. A mere twenty five years young, and this shooting star from Vienna is already impressively forging her own glittering path across the Vienna art system. In art circles, this young woman with a face which appears to oscillate between a diva and a Madonna, is already known as a great net-worker. And, since 2005 at the latest, when she exhibited her most comprehensive work to date – no less than a “Chess Opera” in her show at the Kunsthalle entitled “Lebt und arbeitet in Wien II” (Lives and Works in Vienna II), she has also become known beyond the inner circles.
Since leaving the Viktringer Klosterschule at the age of sixteen and ambitiously heading for Vienna and art it seems as if nobody has been able to withstand her power to enthuse. MAK director Peter Noever praises her to the skies and the list of people with whom she has cooperated exudes prominence almost to the point of irritation: Burg Theatre actor Ignaz Kirchner whom, Komad recalls, she met in a coffee house by chance participated in two of the three films she has meanwhile produced. For the biblical sum of a “loaf of bread, a vat of salt and a glass of white wine” he played Robert Walser’s “Der Spaziergang” exclusively for her says Komad. Today, she considers him one of her mentors. Along with Peter Matic another Burg star appeared within her orbit and acted in her most recent film “Die Pflicht glücklich zu sein” (The Duty to be Happy). And, for her next project, says the opera singer’s daughter, she would like to “shoot a few short films by Gert-Jonke” – the author already recited the first part of her big chess project for her at the opening of Komad’s exhibition “Operation Capablanca” in 2005 at the Kunsthaus Nexus, in Saalfelden. “These artists are all so autonomous within their worlds”, says Komad, “so they can accept very different things than can other colleagues of my generation”. And because, as child of the theatre, she always had a lot to do with adults, in a special way she has always felt “very close” to her parent’s generation.
And the premier position as “mentor” is occupied by her former teacher Franz Graf at the Academy of Fine Arts, whose class she entered after having changed from the Academy of Applied Art – most probably due to her uncommonly young age she felt “outlawed” at the latter institute. “The way to Franz is what saved me”, she says in retrospect. It was the pervasive sense of freedom there that helped her find the right artistic orientation. For her it was clear that it simply wasn’t enough to paint “nice paintings”.
Despite her many sided project, the videos, the drawings, light sculptures or passport photo booths, in which one can fix one’s own portrait against various script, it is painting which forms her central interest. Here is the “essential source” of her world, the power station of “Zenita City”. She estimates having until now produced 300 pictures: Clear and forcefully painted, always sophisticated with theatrical or mythical subjects such as King Midas or Leda, and, in most cases, replete with philosophical quotes or everyday wisdom which “occur” to her.
She works with her “subjective perception” of things, says Konad and uses heself as “thermostat”. The “information that this `I ́ gives to me” achieve in her art a captivating general validity: “I dreamed I was dear God” in one of her always lightly twisted „Schriftbildern“/ “Letter Pictures”/“type face”. Or “Blood does not flow from the abstract”. Above “knowledge is a highly complicated thing” she painted in red “love also”. And “God is nothing”, passionately crossed out, becomes “God is not nothing”.
A relatively new aspect in her painting is the leap into the three-dimensional, as becomes clear in Komad’s current group exhibition with Angelika Krinzinger and Christoph Raitmayr at Galerie Krinzinger: for instance, a red plastic arrow is directed towards Maria Callas’ brain – namely, “Use your Brain”. And under “Ich liebe Euch” (I love you) a stuffed index finger disarmingly points directly at the viewer. How and with what could one ever respond to this? We love you too, Zenita!