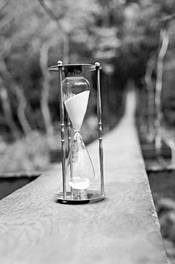 Overduin and Kite is pleased to present "Downtime," an exhibition of new photographs by New York-based artist Eileen Quinlan.
Quinlan's new body of work expands on the "Smoke & Mirrors" project she began in 2005. Quinlan's work focuses on the false transparency of the photographic image and her process is limited to the base mechanics of photographic image making. Using the tools of commercial photography, such as colored light gels and mirrors, in addition to other common materials found around her studio, Quinlan constructs striking abstract compositions that at first suggest a highly manipulated digital illusion but eventually reveal the modest table-top constructions from which they originate. The repeated forms within Quinlan's photographs further emphasize the limitations of her materials and the constructed nature of the images. At certain points the two-dimensional image collapses, revealing the physicality of the constructions and a space beyond the surface of the image. The resulting images are purely reflections; the frame does not present a window, but instead, a mirror.
Eileen Quinlan lives and works in New York. She received an MFA from Columbia University in 2005. Recent solo exhibitions include Galerie Daniel Buchholz, Cologne; Sutton Lane, Paris; and Miguel Abreu, New York. This coming March, Quinlan's work will be featured in a solo exhibition at the Institute of Contemporary Art in Boston. Last year, Quinlan's work was included in "Undone" at the Whitney Museum at Altria and "Update" at White Columns, New York. Quinlan's work has also been featured in exhibitions at P.S. 1 Contemporary Art Center in New York, The Sculpture Center in New York, and The Arnolfini in Bristol, England.
www.overduinandco.com