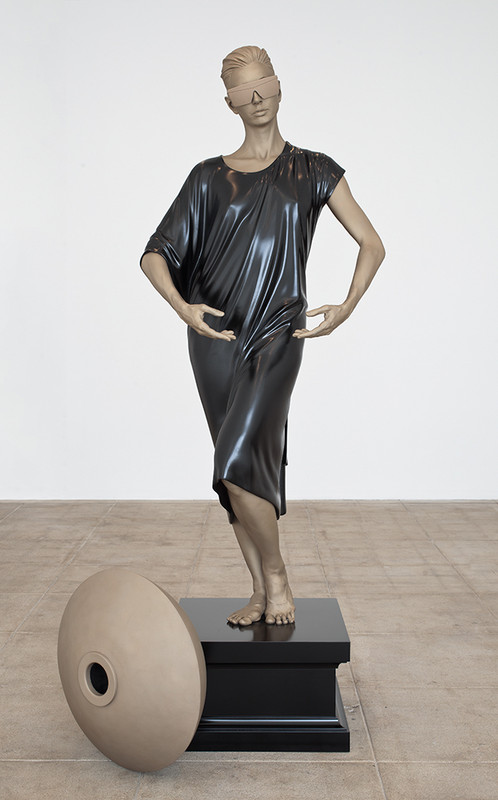 Overduin and Kite is pleased to present the first solo exhibition in Los Angeles by New York-based artist Frank Benson.
The exhibition features a single life-sized bronze figure. The sculpture, titled “Human Statue (Jessie),” depicts a young woman standing on a pedestal wearing a softly draping dress and sunglasses with a large vessel at her feet. This work is the female counterpart to Benson’s sculpture of a nude male, “Human Statue,” from 2005. Both works bring a contemporary figure into the framework of classical Greek and Roman sculpture. This interplay of modernity and classicism is reflected in the making of “Human Statue (Jessie).” The bronze was fabricated from a 3D digital model which was constructed using photographic scans of the subject. The technology used to construct the sculpture is integral to the conception of the work. The cold, mechanical data capture and the precise, physical fabrication employed to create the piece informed the model's rigid, robotic pose. The resulting work combines Benson’s interest in mechanical reproduction, sculptural objecthood and assemblage, which is reflected in the interplay of abstracted forms surrounding the figure.
Citing influences such as Robert Mapplethorpe, Patrick Nagel, Tilman Riemenschneider, and Ridley Scott's “Blade Runner,” Benson’s “Human Statue (Jessie)” is neither an allegorical figure, nor a true portrait of the model. Rather, the figure becomes an armature for the sculpture, eschewing an idealized depiction of the body in favor of a more photographic realism.
Frank Benson’s recent exhibitions include a solo show at Sadie Coles HQ in London in 2009. Benson’s work has also been included in group exhibitions at the Serpentine Gallery, London; the Astrup Fernley Museum of Modern Art, Oslo; the Miami Art Museum, Miami; and Sculpture Center, New York.
www.overduinandco.com