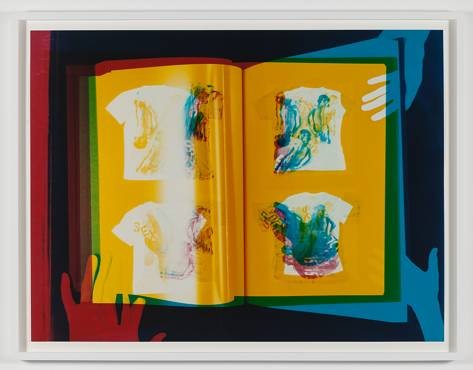 Overduin and Kite presents an exhibition of new work by British artist Nick Relph. This is the artist’s first solo exhibition in Los Angeles.
In 1897, professor of psychology George Malcolm Stratton published a paper titled ‘Vision without Inversion of the Retinal Image.’ Stratton wanted to test the assumption that the inverted image that reaches the retinal wall and is subsequently corrected by the brain was a necessary requirement for ‘upright’ vision. He did this by wearing a tubular device that contained lenses arranged in such a way that all the visual information reaching the eye would be flipped 180°. His first experiment, conducted in Leipzig where Stratton was studying at the Institute for Experimental Psychology, lasted for three days and was spent indoors, watching the street below and observing his sensations.

“All images at first appeared to be inverted; the room and all in it seemed upside down. The hands when stretched out from below into the visual field seemed to enter from above. Yet although these images were clear and definite, they did not at first seem to be real things, like the things we see in normal vision, but they seemed to be misplaced, false, or illusory images between the observer and the objects or things themselves.”

Stratton later returned to his native California where he conducted an extended version of the experiment, this time lasting over a week. The first few days yielded the same disruption of his perceptual motor coordination, but on the sixth day he saw the world again as normal, his brain having adapted to the new conditions. Upon removing the inversion device and using his eyes as normal, the world appeared upside-down once more, and it took several days for this double reversal to wear off. The experiment has been repeated many times, some people adapting so successfully they found themselves able to ride a bicycle, play sports and write. One of these later tests kept the participant bound in a fixed position and unable to move. Despite wearing the apparatus the person experienced no ‘normalization’ of their field of vision — the world continued to look upside down. The phenomenon of visual perception is not dependent on sight alone but on other senses such as hearing and touch, and the sense of where parts of one’s body are positioned in relation to the rest, known as proprioception.
This experience of the unwavering opposite can be attributed to the volunteer being essentially in a state of bondage — itself a kind of reversal of sexual attitudes, where submission and restriction are favored over the ideal of balance and mutual freedom. Both as ‘Sex’ and in its later incarnation as ‘Seditionaries,’ the boutique run by Vivienne Westwood and Malcolm McLaren on London’s Kings Road offered clothes directly inspired by the wholly underground S&M and fetish scenes such as tightly fitting rubber t-shirts, muslin tops with extended arms and metal dog clips that recalled straitjackets and full bondage suits were for the first time available in a high-street context, a private subterranean culture brought out into the half light of West London. Whereas previously Westwood and McLaren had been inspired by and catered to the distinctly retro Ted and Rocker scenes, with Seditionaries, in the words of Jon Savage, the pair ‘moved from past into future time.’ The shops interior was sleek and grimly futuristic — gray industrial carpet, a table housing a rat in a cage beneath the glow of strip lights and a television, constantly on.
Behind the counter a large color photograph of Piccadilly Circus hung upside down, causing the familiar statue of Eros to appear to be falling from earth, downward into the open sky. The adjacent walls were covered in wallpaper screened with correctly oriented images of a devastated Dresden — a ruin being a building in reverse. The shop exterior signaled a halfway point into this vortex with a large strip light above the door mounted on a diagonal slant, a forewarning of the upending inside, which would soon enough tilt the country on its head.
Located in Kyoto prefecture, the city of Miyazu sports a small bay facing north-east toward the Sea of Japan. A thin, sandy peninsula covered in pine trees arcs down from the north shore nearly reaching the southernmost face of the bay, which connects to the stretch of land via a bridge. The narrow spit, known as Amanohashidate, attracts tourists to the vantage points offered by the gentle mountains on either side of the bay, the views from which are considered some of the most beautiful in Japan. The true way to see Amanohashidate, however, is via the method called mata nozoki, whereby the spectator stands with their back to the view and bends forward so that their head hangs between the knees and the view becomes inverted. Seen this way, the bay’s water seems to dissolve and merge with the reflected atmosphere, and Amanohashidate itself appears as a bridge reaching upward from the earthbound shore to the heaven of the opposing mountains now suspended in an expanded sky.
www.overduinandco.com