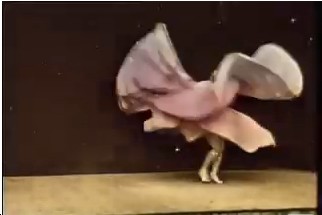 Overduin and Kite is pleased to present "Winterlong," an exhibition of new paintings by London-based artist Silke Otto-Knapp. This is the artist's first solo exhibition in Los Angeles.
Silke Otto-Knapp's recent paintings focus on staged figures in poses or choreographed formations. The images are often based on found photographic sources and are rendered in translucent washes of color or shimmering monotones of silver gouache on canvas. Using watercolor as her primary medium, Otto-Knapp builds up the surface in layers, washing one layer away and painting over what remains, constructing subtle compositions that are both carefully rendered and beautifully diaphanous. The arrangements of Otto-Knapp's figures conflate the space of the stage and the pictorial space of the paintings creating varying degrees of depth or flatness.
Though based on photographs, Otto-Knapp eliminates elements of the photographic composition, such as shadows and highlights, emphasizing instead the geometric forms of a dancer’s pose, a costume’s pattern, or the silhouette of a couture gown. Several silver canvases refer to moments in Bronislava Nijinska’s 1923 ballet “Les Noces,” a subject that Otto-Knapp has painted frequently, capturing Nijinska’s modernist, ritualistic choreography in images that alternately reveal themselves or disappear given the quality of light and perspective of the viewer. Otto-Knapp’s approach to choreography as a highly specialized, abstract language is fore-fronted, as the dancers' formations are presented outside of any theatrical framework.
Silke Otto-Knapp was born in 1970 in Germany. Since 1995 she has lived and worked in London. Solo exhibitions of Otto-Knapp's work have been organized by the Tate Britain and the Kunstverein Dusseldorf. A survey exhibition of recent paintings will be held at Modern Art Oxford later this year.
www.overduinandco.com