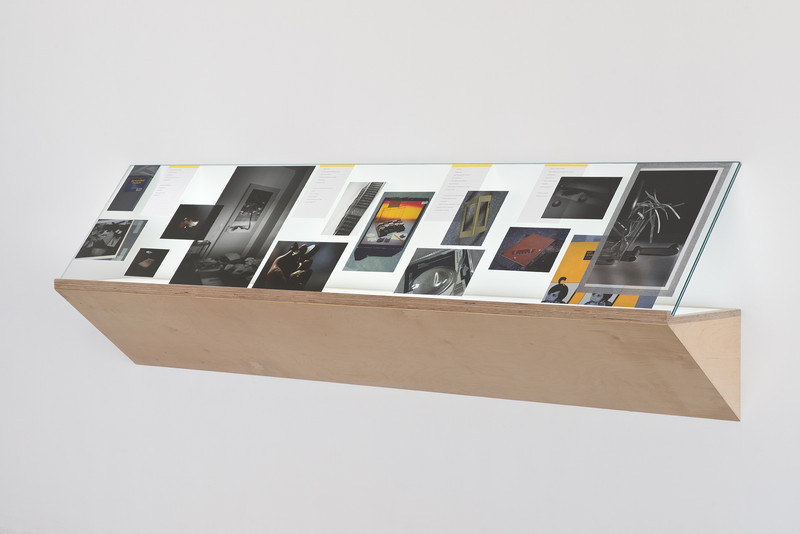 Overduin & Co. is pleased to present an exhibition by British artist, Tris Vonna-Michell. Through live performance and audio recordings of spoken texts, Vonna-Michell relays circuitous and multilayered narratives that combine personal anecdotes and historical research. Vonna-Michell’s narrative structures are characterized by repeated detours, dead ends, and streams of association. Dense conglomeration of photographic material, from film and slide projections to photographic prints and other ephemera form a “visual script” that is animated by the artist’s recitations. Integrating fiction and factual information, Vonna-Michell’s narratives address the nature of coincidence and contingency, often referencing his personal history and artistic production. His practice builds on a process that is both recursive and prospective with images drawn from his own archive, including those from previous works, continually reappearing in new configurations.

For this exhibition, Vonna-Michell presents an installation of “Finding Chopin: Dans l’Essex.” The piece revisits Vonna-Michell’s research on French concrete and sound poet Henri Chopin (1922–2008). Between the 1950s and 1970s Chopin created a large body of pioneering recordings using early tape recorders, studio technologies and the sounds of the manipulated human voice. Chopin lived in Vonna-Michell’s hometown of Leigh-on-Sea in Essex, England between 1968 and 1986. Vonna-Michell’s interest in Chopin began after asking his father how he came to be born in Leigh-on-Sea. His father suggested he find and ask Henri Chopin. “All you need to know is that he loves quail eggs, lives in Paris and is 82 years old,” Vonna-Michell’s father relayed. Vonna-Michell then set out to meet Chopin. His ongoing performances and installations titled, “Finding Chopin” have continued since 2005.

Originally shot on 16mm film, “Finding Chopin: Dans l’Essex” begins and ends with scenes of the estuary and marshland of Essex filmed on a single day from dawn to dusk. The film is projected into a corner, causing the projected image to spill across two walls distorting part of the projection. The landscape footage bookends scenes of an elaborate tableau of staged objects, photographs, and ephemera from journeys related to Vonna-Michell’s research on Chopin. A sequence of images from a slide projector are projected through the tableau onto an accordion screen. The landscape at dawn opens the film, and views of the marshland at dusk close the film. The piece ends with a slide projector cycling through a catalogue of images. Certain images document photographs with a related object placed on top of the print. The film runs simultaneously listing the location and year of the image and object montages. In a separate room, a lightbox illuminates a storyboard-like assemblage of photographs from Vonna-Michell’s Chopin research beside pages from a poem that served as a script of sorts for the imagery of the film. The lightbox is accompanied by the film’s field recordings and a live recording of Vonna-Michell’s performed text.

Tris Vonna-Michell lives and works between Stockholm and Southend-on-Sea in the UK. Currently an exhibition of Vonna-Michell’s work is on view at Presentation House in Vancouver. Recent solo exhibitions have been organized by VOX Centre de l’Image Contemporain in Montreal, T293 in Rome, Jan Mot in Brussels, Capitain Petzel in Berlin, BALTIC Centre for Contemporary Art in Gateshead, Metro Pictures in New York, and Cabinet Gallery in London. Vonna-Michell’s work has been included in exhibitions at the Tate Britain in London, Moderna Museet in Malmö, the Centre Pompidou in Paris, the Secession in Vienna, the Shanghai Biennial, and the Yokohama Triennial. Vonna-Michell was nominated for the 2014 Turner Prize, and was awarded the Baloise Art Prize and Ars Viva Prize for Fine Arts in 2008. He studied at the Glasgow School of Art, the Städelschule in Frankfurt, and Emily Carr University in Vancouver.
www.overduinandco.com