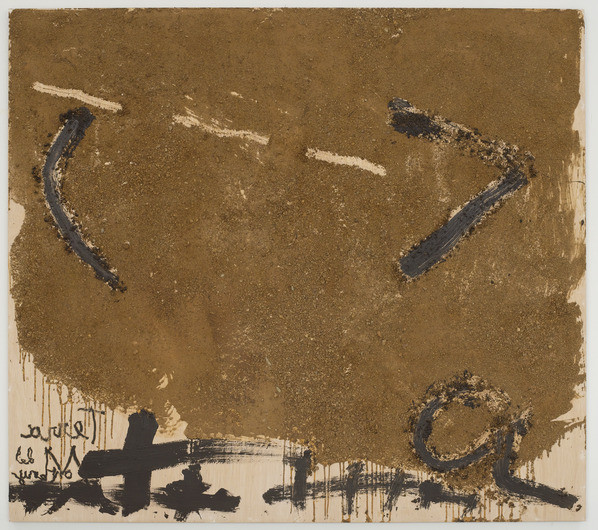 A new catalogue accompanying the exhibition will feature essays by Dore Ashton, Dan Cameron and Barbara Rose as well as an interview with the artist by Manuel J. Borja-Villel. These texts, all commissioned during Pace’s more than twenty-year relationship with Tàpies, will appear together for the first time in this new volume.

Pace’s exhibition coincides with Tàpies: From Within, a survey exhibition curated by former Tate Modern director Vicente Todolí that will be on view at the Pérez Art Museum Miami from February 6 to May 3, 2015.

In the nearly seven decades of his career, Tàpies created a prolific and singular body of work that redefined painting and influenced future generations of artists. Presenting work made between the 1960s and his death, this will be the first exhibition at Pace to span multiple decades of the twentieth-century master’s work.

Following the Spanish Civil War and World War II, Tàpies sought to develop a new kind of painting. In the 1950s he began making his first matter paintings using materials such as marble dust and resin. These paintings positioned Tàpies as a leading figure in Europe’s avant-garde and signaled the beginning of a lifelong investigation of materials and forms that made him one of the most influential postwar artists.

Symbols drawn from his Catalonian heritage and studies of Eastern and Western spiritual traditions recur across the artist’s work. Dan Cameron notes that these markings “proliferate as a kind of. . . handwriting, a way for Tàpies to make a mark in space which connects with the deepest human impulse to communicate through sign.”

For Tàpies, these markings and his handling of humble materials constitute what Barbara Rose describes as an act of consubstantiation. Describing the ritualistic dimension of the artist’s work, she writes that “the essential act for Tàpies is not depiction or representation but the transformation of matter into spirit.” She adds that for Tàpies, art’s purpose “is to alter and heighten consciousness, bringing us into contact in the most powerful way with reality, not as it is pictured but as it literally exists in time and space.

Antoni Tàpies (b. 1923, Barcelona; d. 2012, Barcelona) was a leading figure in Spain’s postwar art movement. The artist participated in multiple clandestine artist groups during the 1940s and early 1950s, including the influential Dau al Set that he cofounded in Barcelona; a decade later, he was briefly associated with Group Zero. In 1950, Tàpies had his first solo exhibition, and was hailed as a leading voice in Art Informel. In 1953, he had two solo exhibitions in the United States. In 1984, he established the Fundació Antoni Tàpies, which hosts symposia and rotating exhibitions as well as one of the largest collections of the artist’s work. Tàpies represented Spain at the 45th Venice Biennale in 1993, for which he was awarded the Golden Lion. His work was featured in three other exhibitions at the Venice Biennale between 1952 and 1967, as well as multiple editions of the Carnegie International and Documenta. Other important group exhibitions include New Spanish Painting and Sculpture, The Museum of Modern Art, New York (1960); Art and Utopia. Action Restricted, Museu d'Art Contemporani de Barcelona (2004); and Destroy the Picture: Painting the Void, 1949–1962, Museum of Contemporary Art, Los Angeles (2012–13).

This exhibition is Tàpies’ ninth at Pace and first since his death in 2012.
www.thepacegallery.com