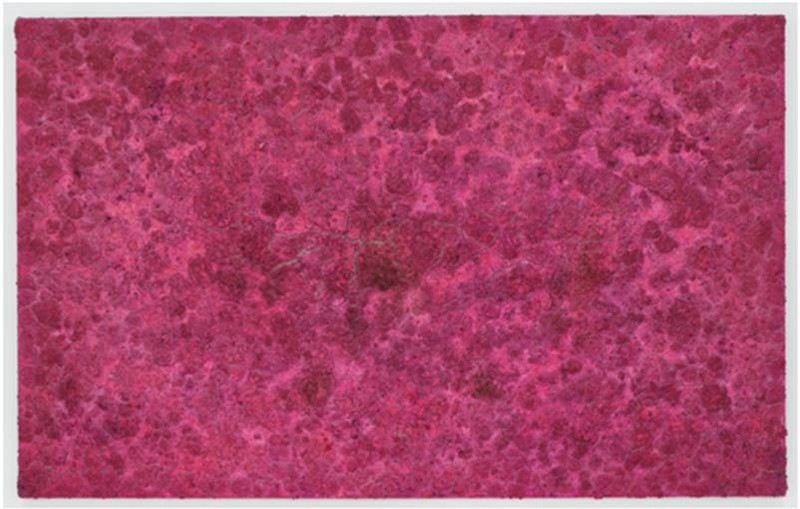 The Pace Gallery is pleased to announce an upcoming exhibition of new work by Mexican-born artist Bosco Sodi, featuring twelve large-scale, monochromatic paintings created in 2011 in Sodi’s studio in Red Hook, Brooklyn. Bosco Sodi: Ubi sunt will be on view at 545 West 22nd Street from December 9, 2011 through February 4, 2012. A catalogue with an essay by art historian, critic, and curator Mark Gisbourne will accompany the exhibition. The artist will be present for an opening reception on Thursday, December 8 from 6 to 8 P.M.

The twelve paintings on view in the exhibition—all created with Sodi’s signature use of pure pigment, sawdust, wood pulp, natural fibers, water, and glue—range in color and saturation from vivid pink, derived from sources in Mexico, India and Morocco, to deep blue, created with lapis lazuli or indigo from Mexico or India, to ink black, harvested from dyes or more immediate sources like carbon and sometimes even soot. Of his choice in materials, Sodi has said that “the energy that emanates from the organic matter is much stronger than that of other types of material, such as those created by man. That is an infinitely more intense dialogue with the soul. Of this type of matter we are composed and it is part of us.”

The terrestrial surface of each thickly encrusted painting is built up by hand over the course of one or two days. Once Sodi begins a painting, he does not rest until the process is complete: “When I am making a painting, I don’t stop. I don’t eat, I don’t sleep after the preparations are made and the first layer is put down. It’s a continuous action, like a performance.” Hundreds of tiny cracks and larger fissures split the surface like scorched earth, the result of outside factors that inevitably play into the drying process once the more controlled methods of creation have ceased. Sodi maintains studios in New York, Berlin, Barcelona, and his native Mexico City, and his paintings relate site-specifically to the city in which they are created; climate change, a city’s altitude and water constituents, even the type of pigments that are readily available, create an unpredictable environment in the studio that dramatically affects the sculptural relief of his canvases.

The title of Sodi’s exhibition, Ubi sunt, is a medieval Latin phrase meaning “Where are...?”, which can be understood as a meditation on mortality and life’s transience. In his catalogue essay, Matters of Memory and Material Intuition, Mark Gisbourne writes that Ubi sunt is an “engagement with a lamentation of what is past brought into the present.” Each of Sodi’s paintings is a summary of his memories and collective experiences, made present by an arduous and direct method of creating that demands his full physical and emotional participation. Ubi sunt is also a concept that reflects the phenomenological experience of Sodi’s art. Gisbourne states that “Sodi’s personal aesthetic view is realised through an arduous physical processing and manipulation of materials. But at the same time further characterised by their being inseparably embedded within the creative phenomenological intuitions that the materials are able to both generate and revivify. It is a personal equation where past and present experiences and associations are brought each time into a unique state of provisional internal unity.”

Sodi’s art tends to defy categorization even while rooted in the “history of immersive abstract painting,” as critic and curator Lilly Wei explains. The physical act of creation and all-over nature of Sodi’s paintings share an affinity with Jackson Pollock’s action paintings; as a colorist he identifies with Rothko and de Kooning; and his mixture of material and intuition, defined by Gisbourne as “memory, association, or recollection,” look to the works of Antoni Tàpies and Jean Dubuffet. As Gisbourne writes, “any attempt to simply reduce the artworks of Bosco Sodi to material visual analysis alone is largely to misunderstand the creative nature of their contents.”

A museum exhibition devoted to Sodi’s work will open at the Museo de Arte de Ponce in Puerto Rico on December 2, 2012.


Born in Mexico City in 1970, Bosco Sodi has had solo exhibitions around the world, including a recent one-person show at the Bronx Museum of the Arts, which featured Pangaea, a monumental painting measuring 13 by 40 feet. Lilly Wei contributed an essay to the accompanying exhibition catalogue. Sodi’s work can be found in numerous public and private collections, including 590 Madison, New York; the De La Cruz Collection, Puerto Rico; Jumex Collection, Mexico DF; Godia Foundation, Barcelona; and MIAAO (Museo International del Arte Aplicada Oggi, Turin, among others.
www.thepacegallery.com