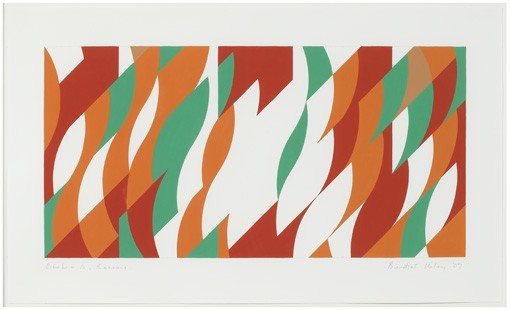 Marla Prather, former curator at the National Gallery of Art, Whitney Museum and Tate, London, has contributed an essay to the accompanying exhibition catalogue, which also includes an interview with the artist by Lynne Cooke, curator at Dia Art Foundation, conducted at the Cranbrook Museum of Art in Michigan. In her essay New Cadences: Paintings by Bridget Riley, 2004-2007 Prather writes that “Riley has established a personal repertoire of colors, shapes and compositional structures that have become as closely identified with her unique aesthetic as the black and white squares, lines, and ovals of her paintings from the 1960s.” She continues, “(Riley’s) expansive horizontal format and increased scale were adopted to accommodate the proliferating forms that are rhythmically deployed across the compositions, now like vast panoramas.” Prather also acknowledges Riley’s extensive travels as well as her affinities and understanding of artists such as Cézanne and Matisse and how it informs her painting practices.

Bridget Riley has stated that her “paintings breed” and the new works are clear indications of how she continually builds upon her artistic developments. In these canvases Riley has reintroduced distinct vertical divisions which counter the forceful diagonal momentum of the curvilinear forms, effectively redirecting the energy back into the composition. Riley’s skillful combination of vibrant hues heightens the complexity of her paintings. In Dark Painting (Painting with Verticals, Cadence 6), 2006, for example, color accentuates the formal aspects of her compositions, adding movement and rhythmic organization to the overall structure.

The 12 gouaches on view offer insight into the artist’s working method. These small studies aid in Riley’s decision making process and she considers them essential to her work. Prather relates her preparatory process to Matisse’s history with gouache découpée, though unlike Matisse, Riley’s ultimate result is the painting not the collage.