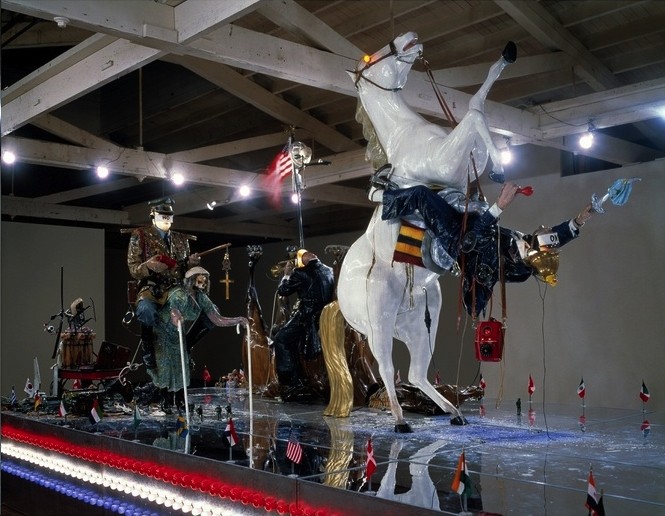 Pace is honored to present an exhibition of work by Edward Kienholz and his wife and partner Nancy Reddin Kienholz, with whom he collaborated from 1972 onwards. Known for epically-scaled assemblages made from discarded everyday objects and life-sized figures, the Kienholzes’ work addresses the darker sides of twentieth-century Western society, confronting issues of religion, politics, war, sex, and death.

Kienholz: The Ozymandias Parade / Concept Tableaux is on view at 510 West 25th Street from November 2 through December 22, 2012. There will be an opening reception for the public on Thursday, November 1, from 6 to 8 PM. This is Pace’s second exhibition of work by Edward Kienholz. The exhibition is accompanied by a catalogue with an essay by Dr. Martina Weinhart, curator at the Schirn Kunsthalle Frankfurt.

The centerpiece of the exhibition is the incendiary large-scale installation The Ozymandias Parade (1985), an opulent allegory of the abuse of political power, with a parade of figures and symbols representing elements of society. The decadent, nationalistic “ship of fools” is capped with nearly 700 blinking lights, which change with each presentation to reflect the colors of the nation where the work is being displayed. Addressing the corrosive effects of fear and propaganda, the tableau depicts a chaotic world turned upside-down: an armed general rides on the back of a fragile female figure who is lured by the “carrot” of a crucifix; the vice president’s horse has toppled off of his roller skates; the menacing, headless vice president faces backwards, blowing a trumpet and waving the flag; the sinister president clings to the belly of his horse, a red phone clutched in his hand and a yellow rubber ducky on his head. Whether the parade’s president shows a YES or a NO across his face is the result of a poll conducted in the weeks leading up to the installation’s opening, comprised of just one simple question: “Are you satisfied with your government?”

The Ozymandias Parade was originally created for the exhibition No! Contemporary American Dada at the Henry Art Gallery in Seattle. It has since been shown in a half-dozen countries and now returns to New York for the first time since the Whitney Museum’s retrospective of Kienholz in 1996. This summer’s presentation of the work at the Museum Tinguely in Basel, Switzerland, was the first time that the answer to the poll has been YES.

The exhibition will also feature ten “Concept Tableaux,” a series of text-based works that contain instructions for larger assemblages, or “tableaux,” as Kienholz referred to them. Created in the mid-1960s, each work consists of a bronze plaque inscribed with its title and accompanied by a framed written description and instructions for the installation. The tableaux also include meticulous contracts detailing the price for each concept and various stages of realization, though only one of Kienholz’s concept tableaux (The Commercial #2, a dingy living room with a television whose screen is covered by a “Legalize Abortion” bumper sticker) was realized according to his contractual specifications. The State Hospital, a gruesome installation of an abused and elderly patient institutionalized in a mental hospital, was built and then later acquired by the Moderna Museet, Stockholm.

Characterized by Kienholz’s direct and sometimes shocking visual language, many of the concept tableaux serve as harsh indictments of contemporary America, from the racial inequalities of 1960s society to the country’s pervasive waste. “Adrenalin-soaked anger drove me through my work,” Kienholz recalled of that period of his career. The American Trip (1966) is a collaboration between Kienholz and the artist Jean Tinguely, inspired by Kienholz’s dismay at “[seeing] the country anew through Tinguely’s European eyes” during a visit from the Swiss artist. The concept instructs that the friends embark on a cross-country road-trip, in which they would drive from Los Angeles until compelled to stop and “do something.”

“Besides the underlying anger, with or without physical material, it is a profound skepticism that defines and distinguishes Kienholz’s essentially highly moral oeuvre,” Dr. Weinhart writes of the The Ozymandias Parade / Concept Tableaux. “There is skepticism about institutionalized faith, which, depending on the work, is sometimes expressed in sneering irony, sometimes in open outrage. Skepticism about sexual power relationships; skepticism about excessive trust in politicians; skepticism about power structures in general.”

Pace’s exhibition follows the acclaimed presentation of The Ozymandias Parade as part of the travelling exhibition Kienholz: Sign of the Times at the Schirn Kunsthalle Frankfurst (2011) and Museum Tinguely, Basel (2012). In addition, the racially charged installation Five Car Stud (1969–72) was acquired by the Prada Foundation earlier this year following its recent presentations at the Los Angeles County Museum of Art (2011) and Louisiana Museum of Art, Denmark (2012).

Edward Kienholz (1927–1994) moved from Washington State to Los Angeles in 1953, where he quickly became a central figure in the Southern California art scene, showing at the influential Ferus Gallery. By the early 60s, he abandoned the abstract paintings and wall reliefs his early career and dedicated himself to installation. Considered one of the pioneers of assemblage and installation art for his groundbreaking mixed-media tableaux, Kienholz has a profound impact on artists of the second half of the twentieth century. From 1972 onwards, he collaborated with his wife, Nancy Reddin Kienholz (b. 1943), who continues to create and oversee the installation and presentation of her and her late husband’s work worldwide. The Kienholzes’ work has been the subject of dozens of museum exhibitions worldwide, including at the Louisiana Museum of Art, Denmark (2012, 1979); the Los Angeles County Museum of Art (2011, 1971); the National Gallery, London (2009); the Whitney Museum of American Art, New York (1996); the Menil Collection, Houston (1995); Musèe Nationale d'art modern, Centre Georges Pompidou, Paris (1977); and the Moderna Museet, Stockholm (1971).

Edward Kienholz (1927–1994) was an American installation artist and sculptor who, from 1972 onwards, created most of his work in close collaboration with his partner and wife, Nancy Reddin Kienholz (b. 1943). Through a direct and sometimes shocking visual language composed of discarded everyday objects and life-size figures, the Kienholzes’ assemblages confront political and social issues, from racial discrimination and the oppression of women to violence or the Vietnam War. After moving from Washington State to Los Angeles in 1953, Ed Kienholz quickly became a central figure in the Southern California art scene, showing at the influential Ferus Gallery. By the early 60s, he abandoned the wall-based work of his early career and dedicated himself to installation.

Ed Kienholz and Nancy Reddin Kienholz’s work has been the subject of dozens of museum exhibitions worldwide, including at the Louisiana Museum of Art, Denmark (2012, 1979); the Museum Tinguely, Basel, Switzerland (2012); the Los Angeles County Museum of Art (2011, 1971); the National Gallery, London (2009); the Whitney Museum of American Art, New York (1996); the Menil Collection, Houston (1995); and the Moderna Museet, Stockholm (1971).
www.thepacegallery.com