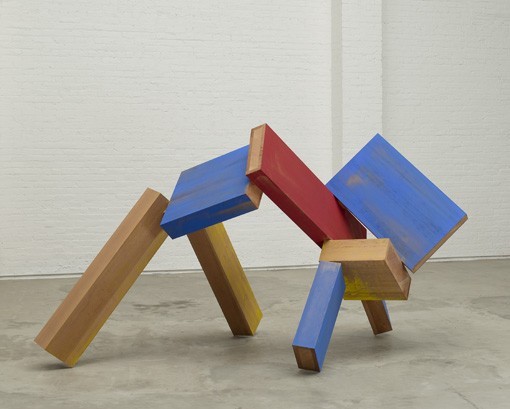 Five years ago Shapiro embarked on a series of hanging constructions made from wire and wood. Moving further away from anatomical references, the hanging sculpture signified a radical departure. The spontaneity and unpredictability of the assemblage led to a transformation in Shapiro’s new investigations of form and how sculptural compositions affect perceptions of volume, space, and movement.

Dr. Richard Shiff, Effie Marie Cain Regents Chair in Art and Director of the Center for the Study of Modernism at the University of Texas at Austin, has contributed an essay to the accompanying exhibition catalogue. Dr. Shiff writes, “Large or small, his sculptural constructions divide into relatively manageable units of material, so that the character of a work is never the product of imposing size but of articulation.... In every instance, Shapiro’s sculpture draws its animating energy not from its grounding or means of support, nor from the volume of architectural space that may surround it, but from its internal tensions.” Dr. Shiff also remarks on Shapiro’s application of color on the wood sculptures. “Shapiro’s use of color—sand-blasted paint, either rose or blue on selected elements, slight traces of yellow on some others—enhances the effect by dissociating the individual segments so that the blockiness of units does not become heavy by accumulation. This observation might hold for many of Shapiro’s works: reason seems to tell us that they should appear heavier than they do. When we suspend reason, experience seizes the opportunity to correct it.”

Joel Shapiro (born 1941, New York City) received a B.A. (1964) and M.A. (1969) from New York University. Since his first one-person exhibition in 1970, Shapiro’s work has been the subject of over 100 solo exhibitions and retrospectives. In 2008, the city of Bilbao will unveil a new sculpture by Joel Shapiro. The Norton Museum recently commissioned the artist to create a two-part sculpture “Up/Over”, which he will inaugurate in December of this year. Shapiro is currently working on a new public commission of a suspended bronze sculpture that will be installed late 2008 or 2009 in London at 23 Saville Row. In 2005, Shapiro was invited to participate in Correspondences, a program organized by the Musee d’Orsay to present the museum’s collection through the eyes of contemporary artists who are asked to exhibit one of their works in relationship to a work from the permanent collection. Shapiro selected Jean-Baptiste Carpeaux’s La Danse, 1865-1869, which was originally created for the exterior of the Paris Opera, because he admired Carpeaux’s ability to recreate the energy of vivacious movement within his six dancing figures. Shapiro’s own sculpture 20 Elements, 2004, juxtaposed against the Carpeaux, achieves the same energy, however through abstract means. The exhibition coincided with Joel Shapiro: Work in Wood, Plaster, and Bronze 2001-2005 at PaceWildenstein.

The Metropolitan Museum of Art featured the artist in the summer and autumn of 2001 in a solo exhibition on The Iris and B. Gerald Cantor Roof Garden. Other solo exhibitions include: the Spoleto Festival USA, Charleston, which then traveled to the McNay Art Museum, San Antonio and Denver Art Museum (2000-01); The Yorkshire Sculpture Park, England exhibited Joel Shapiro: Sculptures 1974-1999 (1999-2000); and in 1999, the American Academy in Rome organized Joel Shapiro: Roma, an installation of Shapiro’s smaller works at the Academy and larger works installed in public spaces throughout the city.

Joel Shapiro was elected to the American Academy of Arts and Letters in 1998 and to the Swedish Royal Academy of Art in 1994. Throughout his career, he has been honored with numerous awards including an Award of Merit Medal for Sculpture given by the American Academy and Institute of Arts and Letters, NY (1990); Skowhegan Medal for Sculpture (1986); Brandeis University Creative Arts Award (1984); and the Visual Art Fellowship from the National Endowment for the Arts (1975). In addition, Shapiro’s work has regularly been exhibited in prestigious group exhibitions such as the Whitney Biennial, NY (1977, 1979, 1981, 1989), Documenta in Kassel, Germany (1977, 1982), and the Venice Biennale (1980).

More than 20 commissions and publicly sited sculptures by Shapiro are located in major Asian, European and North American cities including a commissioned work for Des Moines, Iowa (2006); a commissioned sculpture for the Weir Sculpture Garden, Albany Institute of History and Art, (2005); Nasher Sculpture Center, Dallas (2003); Sydney and Walda Besthoff Sculpture Garden, New Orleans Museum of Art, (2003); Harvard Business School, Boston (2000-2003); a commission for the Communaute de Communes de L’Agglomeration Orleanaise, Orléans (2001); Rockefeller University, New York (2000); International Sculpture Collection, Rotterdam (2000); National Gallery of Art Sculpture Garden, Washington, DC (1999); University of Cincinnati (1999); and Museum of Fine Arts, Boston (1999). In 1999, the Friends of Art and Preservation in Embassies (FAPE) commissioned the artist to make a unique sculpture for the United States Embassy in Ottawa, Canada. In addition, his works are installed at the Köln Skulpture Park, Germany (1999); Kanton of Aarau, Switzerland (1997); Israel Museum, Jerusalem (1996); the Sony Plaza, New York (1994-95); and commissioned for both the Kansas City International Airport (1994-96) and Friedrichstadt Passagen, Berlin (1994-95). In 1993, Mr. Shapiro was invited by the United States Holocaust Memorial Museum in Washington, D.C. to create a site specific sculpture outside one of the entrances to the museum.