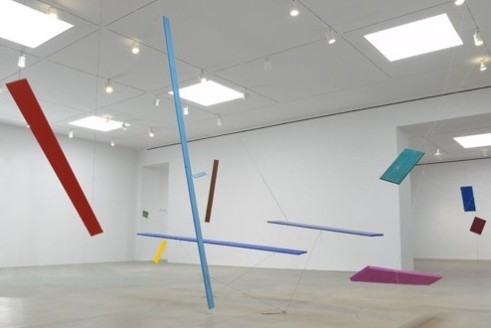 Joel Shapiro’s new body of work is composed of painted rough wood elements suspended in space from the walls, the floor and ceiling via string. Shapiro cuts the wood and paints it with dry pigment in casein emulsion, either before or after it has been suspended. The configurations float and intersect on lines of various angles and tensions. Some are elastic, others more rigid. The string is the structure that supports the individual elements of the form. The string itself is high or low tech, simple fishing line. The floating elements are, for the most part, carefully trimmed three-dimensional wood. The fastenings are industrial.

The artist explains that the installation is “really about discovering the possibilities of the organization of form,” while “simultaneously overcoming the inevitable effect the constructed flatness of architecture (or for that matter a tabletop) has on the situation of form.” The works’ installation is determined in the space. Although they utilize architecture, “they are not about flatness as a starting point,” but rather “the projection of thought into space without the constraint of architecture.”

The evolution towards this body of work can be seen throughout Mr. Shapiro’s career, dating back to the early seventies when he dismantled a draftsman’s dummy and exhibited its dismembered body parts on the floor of The Clocktower in New York City. During the eighties Shapiro made a body of work that utilized a matrix of wood or metal rectangular rods to elevate, support and suspend larger rectilinear elements in space. A series of hanging constructions in wood which Shapiro began creating in 2001 and exhibited in a five-year survey of his work at the gallery in 2005 were an important precursor to this new group of work. They also relate to 4 elements, a site-specific work installed in L.A. Louver's Skyroom in 2004. In a recent commission for a large-scale suspended bronze sculpture at 23 Savile Row in central London, inaugurated in 2009, Shapiro cantilevered Verge (2003–2008), a 16 x 14 x 16 foot bronze sculpture, above the street using cables, occupying the threshold between private and public space.

More than 30 commissions and publicly sited sculptures by the artist are located in major Asian, European and North American cities. Most recently, in 2008, BILBAO Ria 2000, inaugurated a commission by Shapiro for the Lasesarre Park in the town of Barakaldo in Bilbao, Spain. This is the artist’s first public sculpture in Spain. Shapiro is currently working on a large scale painted sculpture commissioned by the Foundation for Art and Preservation in Embassies (FAPE) for the future United States consulate that will be built in Guangzhou, China.