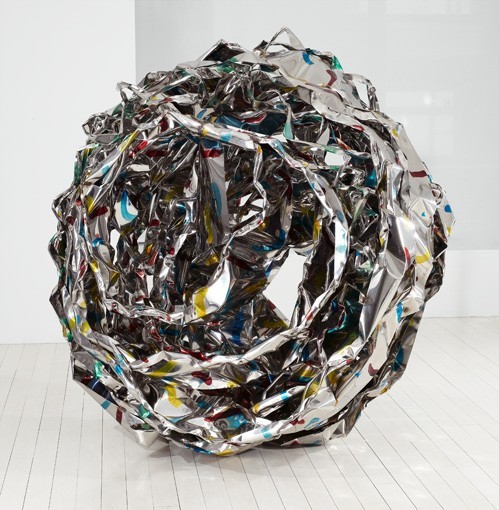 NEW YORK, January 29, 2008—PaceWildenstein is pleased to present an exhibition of recent work by John Chamberlain on view at 32 East 57th Street, New York City, from February 14 through March 15, 2008. The exhibition is accompanied by a DVD of an interview Arne Glimcher conducted with Chamberlain in 2007. The artist will be present at a public opening on Wednesday, February 13th from 6-8 p.m.

John Chamberlain: Recent Work represents a new direction for the artist and a new chapter in a career that has critically redefined sculpture many times over the past five decades.

In 2005, an exhibition of John Chamberlain’s work inaugurated PaceWildenstein’s new gallery on 22nd Street. Featuring Neptune’s Cap, an 8’ x 6’ x 4’ stainless steel sculpture, the 2005 work was in progress in various states since the artist’s visit to Donald Judd’s compound in Marfa, Texas in the 1970s.Originally proposed as an underwater sculpture to be sited in Judd’s pool, the swirling, kelp-like elements of the piece could naturally not be fabricated from rust-prone automotive steel, and for this reason, Chamberlain began to work with strips of stainless-steel instead. Since then Chamberlain has extended his investigation into this material, culminating in the current exhibition. While Popsicletoes (2008) recalls Neptune’s Cap, Chamberlain has created the other pieces by wrestling the silver material, dabbed with strokes of brilliant color, into immense chaotic vortices reminiscent of the centrifugal assemblages found in every period of his work. John Chamberlain: Recent Work includes sculpture ranging from 5’ to 9’ in diameter.

Over the years, John Chamberlain’s investigation of material has resulted in works created from foam, foil, paper bags, Plexiglas, resin, and steel; in each series, form continues to be a primary concern.

Chamberlain has often stated that his years as a student at Black Mountain College, where his teachers included poets Robert Creeley, Robert Duncan, and Charles Olson, were the greatest influence on his work. Remarking on the practices of art and poetry, Chamberlain has commented, “one day something—some one thing—pops out at you, and you pick it up, and you take it over, and you put it somewhere else, and it fits. It’s just the right thing at the right moment. You can do the same thing with words or with metal.”

John Chamberlain’s work was featured this past summer in two group shows at PaceWildenstein. Salvaged included Gondola Henry Miller (1985) alongside works by Robert Rauschenberg, Louise Nevelson, and Tony Feher, all of whom created assemblages out of common and often discarded materials. Free Summer Movie Festival included daily screenings of films by artists: Agnes Martin, Michal Rovner, Lucas Samaras and Chamberlain’s The Secret Life of Hernando Cortez (1968), a rarely shown film depicting the hedonistic and kitschy lifestyle of Hernando Cortez and his wife, starring Taylor Mead and Ultra Violet and directed by the artist.

John Chamberlain (b. 1927, Rochester, IN) studied at The Art Institute of Chicago and Black Mountain College in North Carolina in the 1950s. In addition to working with steel, the medium for which he is best known, Chamberlain made films in the late 1960s and has employed various other media such as chrome, foam, foil, ink on canvas, oil, photography, and Plexiglas. Exhibited throughout the United States and Europe, Chamberlain’s work has been included in the São Paolo Biennal (1961, 1994), Venice Biennale (1964), Whitney Biennial (1973, 1987), Documenta, Kassel, Germany (1982), and most recently, the 181st Annual: An Invitational Exhibition of Contemporary American Art at the National Academy of Design, New York (2006).

John Chamberlain’s work has been the subject of over 135 solo shows, traveling exhibitions and retrospectives. In 2007, the Musée d’Orsay, Paris invited the artist to participate in Correspondences, a program organized to present the museum’s collection through the eyes of contemporary artists who are asked to exhibit one of their works in relationship to a work from the permanent collection. Chamberlain chose to juxtapose his sculpture Lipstick Canteen (2000) against Vincent van Gogh’s Doctor Gachet’s Garden (1980). Chamberlain considers van Gogh to be an important early influence, and his sculpture’s brightly colored metal leaves confront the lush vegetation in van Gogh’s painting. In 2005, the Chinati Foundation, Marfa, Texas mounted John Chamberlain: Foam sculptures (1966-1979) and Photographs (1989-2004), the first comprehensive survey of the artists’ work since 1966.

Chamberlain has been twice awarded a John Simon Guggenheim Memorial Foundation Fellowship (1966 and 1977) and in 1990, was elected a member of the American Academy and Institute of Arts and Letters, New York. Some years following his residency at the Skowhegan School of Painting and Sculpture, Maine, Chamberlain received the school’s 1993 Skowhegan Medal for Sculpture. That same year, he was honored with a Lifetime Achievement Award in Contemporary Sculpture from the International Sculpture Center, Washington, D.C. In 1997, Chamberlain was named a recipient of The National Arts Club Artists Award, New York, and in 1999, he received the Distinction in Sculpture Honor from the Sculpture Center, New York. In 2007, Guild Hall Academy of the Fine Arts named Chamberlain the Visual Arts Honoree for the 22nd Annual Lifetime Achievement Award.