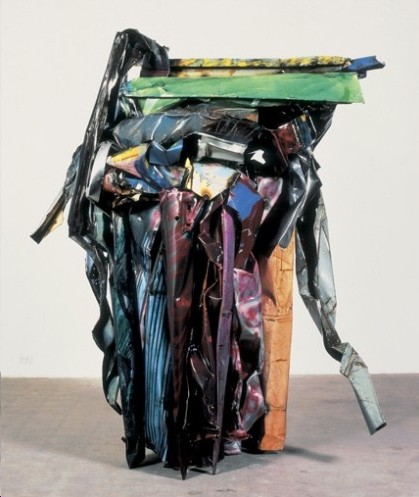 Chamberlain has been the subject of thirteen solo exhibitions at The Pace Gallery since 1963, as well as the seminal exhibition De Kooning and Chamberlain: Influence and Transformation, which explored the affinities
between the muscular and gestural styles of the two Abstract Expressionists working across generations and mediums. Critics, curators, and artists including Donald Judd, Irving Sandler, Klaus Kertess, Henry Geldhalzer,
Bernice Rose, Brian O’Doherty, and Julie Sylvester have contributed essays and interviews with Chamberlain for exhibition catalogues published by the gallery, excerpts of which will serve as wall text for key works in the
exhibition, contextualizing the evolution of Chamberlain’s work over three decades.

John Chamberlain (b. 1927, Rochester, IN) studied at The Art Institute of Chicago and Black Mountain College in North Carolina in the 1950s. In addition to working with steel, the medium for which he is best known, Chamberlain made films in the late 1960s and has employed other media including foam, foil, ink on canvas, oil, photography, and Plexiglas. Exhibited throughout the United States and Europe, Chamberlain’s work has been included in the São Paolo Biennal (1961, 1994), Venice Biennale (1964), Whitney Biennial (1973, 1987), Documenta, Kassel, Germany (1982), and the 181st Annual Invitational Exhibition of Contemporary American Art at the National Academy of Design, New York (2006).

Chamberlain’s work has been the subject of over 140 solo shows, traveling exhibitions and retrospectives. In 2005, the Chinati Foundation, Marfa, Texas, mounted John Chamberlain: Foam Sculptures (1966–79) and Photographs (1989–2004), the first comprehensive survey of the artists’ work since 1966.

Chamberlain has been twice awarded a John Simon Guggenheim Memorial Foundation Fellowship (1966 and 1977) and in 1990 was elected a member of the American Academy and Institute of Arts and Letters, New York. Some years following his residency at the Skowhegan School of Painting and Sculpture, Maine, Chamberlain received the school’s 1993 Skowhegan Medal for Sculpture. That same year, he was honored with a Lifetime Achievement Award in Contemporary Sculpture from the International Sculpture Center, Washington, D.C. In 1997, Chamberlain was named a recipient of The National Arts Club Artists Award, New York, and in 1999, he received the Distinction in Sculpture Honor from the Sculpture Center, New York. In 2007, Guild Hall Academy of the Fine Arts named Chamberlain the Visual Arts Honoree for the 22nd Annual Lifetime Achievement Award.

The Pace Gallery represented John Chamberlain from 1987 to 2010.
www.thepacegallery.com