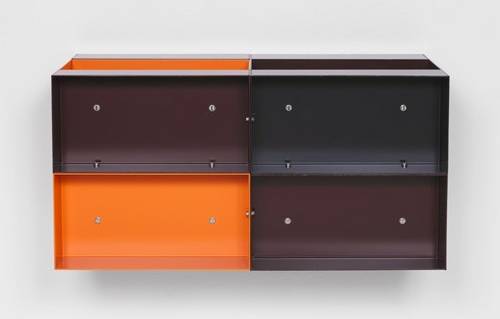 NEW YORK, January 26, 2007—PaceWildenstein is pleased to present Josef Albers / Donald Judd: Form and Color, an exhibition featuring 15 oil paintings by Albers from 1947 to 1967 and 11 sculptures by Judd from 1977 to 1994, on view from January 26 through February 24, 2007 at 32 East 57th Street, New York City. A catalogue with writings and correspondence by Albers and Judd accompanies the exhibition.

Josef Albers / Donald Judd: Form and Color pairs two seminal artists with very different theoretical approaches to color, but bear strikingly similar results. Judd held Albers in high esteem throughout his career, and Albers’ use of color was a great influence on him. Both artists’ also based their compositions on pure geometry, creating formal structures that allowed color to dominate. This intimate grouping of paintings and sculptures provides an in-depth analysis of both artists’ serial nature, their on-going fascination with color theory, and a remarkable awareness of the other’s creative output.

In Albers’ book from 1963, Interaction of Color, he states that “color, when practically applied, not only appears in uncountable shades and tints, but is additionally characterized by shape and size, by recurrence and placement, and so on, of which particularly shape and size are not directly applicable to tones.”
Thirty years later, in Some aspects of color in general and red and black in particular, Judd writes, “color is knowledge. As Albers says, it is very subjective, even hard to remember. Color is also objective.”

PaceWildenstein is grateful to The Josef and Anni Albers Foundation and Judd Foundation for their support of this exhibition.

Josef Albers (1888–1976) attended the Royal Art School in Berlin between 1913 and 1915 before becoming certified to teach art. Albers later studied art in Essen and Munich before entering the Bauhaus in Weimer in 1920. A year later Walter Gropius invited Albers to conduct a preliminary course in material and design; Albers accepted the offer and, two years following, moved with the Bauhaus to Dessau where he was then appointed Bauhaus Master. During his tenure, Albers continued to teach basic design and worked in glass and typography, directed the Bauhaus furniture workshop, and headed the wallpaper design sector. Under the directorship of Mies van der Rohe, Albers became the assistant director of Bauhaus in 1930. After the Bauhaus closed in 1933 Albers emigrated to the United States and, that same year, was invited to teach at the newly founded Black Mountain College, North Carolina, where he was a faculty member until 1949. In 1936 Albers was given his first one-person exhibition in New York City and began leading seminars and lecturing at the Graduate School of Design, Harvard University. Following his departure from Black Mountain, Albers began his Homage to Square series and was appointed Head of Department of Design at Yale University in 1950; he retired from Yale a decade later. Throughout the 1950s and well into the 1960s Albers published poetry, articles and books on art and taught and lectured widely at American and European universities, thus influencing a generation of young artists.

Albers’ first retrospective was organized by the Yale University Art Gallery in 1956, and a major traveling exhibition of his work was organized by the International Council at the Museum of Modern Art, New York, which was on view at 11 U.S. museums and 12 museums throughout Central and Latin America between 1964 and 1967. In 1971 the Metropolitan Museum of Art organized a landmark Albers retrospective, the first one-man show ever to be given to a living artist by that museum. More recent exhibitions include Josef Albers: A Retrospective organized by the Solomon R. Guggenheim Museum, New York (1988) with later venues in Finland and Germany; Josef Albers: Glass, Colour and Light, a traveling exhibition with venues in Europe and the U.S. organized by the Peggy Guggenheim Collection, Venice (1994-96); and Albers and Moholy-Nagy: from the Bauhaus to the New World organized by the Tate Modern, London (March 9–June 4, 2006), which debuted at the Whitney Museum of American Art from November 2, 2006–January 21, 2007.

After serving in the United States Army during the Korean War, Donald Judd (1928–1994) attended the College of William and Mary (Williamsburg, VA), the Art Students League (New York City), and Columbia University (New York City) where, in 1953, he received a B.S. in philosophy. In 1957 Judd had his first solo exhibition in New York, and soon thereafter he returned to Columbia University to pursue graduate studies in art history. Judd’s art criticism was published in Artnews, Arts Magazine and Art International between 1959 and 1965; during those early years Judd had several exhibitions at the Green Gallery in New York.

In 1971 Judd and his family moved to Marfa, a remote town in West Texas located halfway between Houston and Los Angeles, where, fifteen years later, he founded the Chinati Foundation. The Chinati Foundation is a non-profit exhibition space featuring permanent installations of Judd’s art as well as work by other artists such as John Chamberlain, Dan Flavin, Claes Oldenburg and Coosje van Bruggen, and annually attracts over 10,000 visitors from around the world to Presidio County, halfway between Midland and El Paso, Texas.

During his lifetime, Judd had over 125 solo exhibitions including two retrospectives at the Whitney Museum of American Art, New York (1968, 1988) and an early museum exhibition at the Pasadena Art Museum (1971). In 1975 the National Gallery of Canada, Ottawa, organized a Judd exhibition and published a catalogue raisonné of Judd’s work. That same year the Press of the Nova Scotia College of Art and Design and New York University Press jointly published Judd’s Complete Writings 1959-1975. The Stedelijk van Abbemuseum, Eindhoven, The Netherlands later published Judd’s Complete Writings 1975-1986. Judd worked and taught at several academic institutions including the Brooklyn Institute of Arts and Sciences (1962-64), Dartmouth College, Hanover, NH (1966), Yale University, New Haven, CT (1967), and Oberlin College, Oberlin, OH (1976) and was the recipient of numerous awards including a grant from the National Endowment for the Arts (1967), a Guggenheim Fellowship (1968), the Skowhegan Medal for Sculpture (1987), the Brandeis University Medal for Sculpture (1987), the Frederick R. Weisman Art Foundation Award (1991), the Stankowski Prize, Stuttgart (1993), and the Sikkens Award, Sassenheim, The Netherlands (1993). In 1992 Judd was elected a member of the Royal Academy of Fine Arts, Stockholm, and the Littlefield Society, University of Texas, Austin. Recent Judd exhibitions include: “Donald Judd: Works from Dutch Public Collections” at the Stedelijk Museum, Amsterdam (1993-94); “Kunst + Design: Donald Judd” at the Museum Wiesbaden, Wiesbaden, Germany (1993–1994, traveled); “Donald Judd: Prints 1951–1993, Retrospektive der Druckgraphik” at the Haags Gemeentemuseum, The Hague (1993–1994, traveled); “Donald Judd: Untitled, 1976” at the Dia Center for the Arts, New York (1999-2000); “Donald Judd Colorist” organized by the Sprengel Museum, Hannover (2000-01) and traveling to other European venues; “The Essential Donald Judd” at the Walker Art Center, Minneapolis (2001-02); “Donald Judd. Early Work (1956-1968)” at the Kunsthalle Bielefeld, Germany (2002); and Donald Judd at the Tate Modern, London (2004), which traveled to K20 Kunstammlung Nordrhein-Wesfalen, Dusseldorf (2004) and the Kunstmuseum, Basel, (2005).