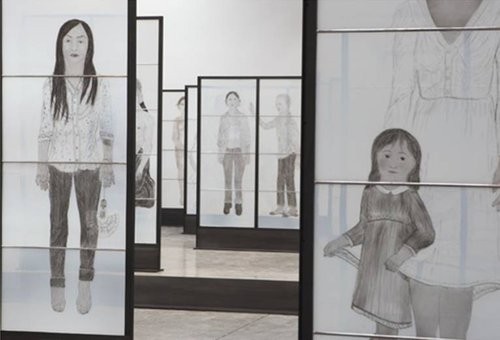 Originally inspired by an eighteenth-century silk needlepoint by Prudence Punderson entitled The First, Second, and Last Scene of Mortality (1776-83, Connecticut Historical Society, Hartford), “Pilgrim” is a cyclical journey which alludes to various aspects of a person’s life, presented through the images of women. Smith used friends and colleagues as models--not as portraits, but as stand-ins for various states of a person, or a person’s wandering pilgrimage through life. Representations of birth, loss, and death speak to the human experience. “Pilgrim” depicts women sitting, listening or being reflective, as well as teaching and empowering the next generation, which ground the work in the artist’s experience. Smith explains that creativity is given freely, and comes to one often in quiet moments.

The tradition of the journey which re-enacts or retraces the sacred elements of life or specific events is well known throughout history and the history of art. The four sacred pilgrimages of Buddhism, Ancient Rome's Via Sacra, Mecca's Hajj and Jerusalem's Stations of the Cross are all based on this principle. In the late 17th century, John Bunyan's novel, A Pilgrim's Progress from This World to That Which is to Come, established the spiritual path as a literary archetype during the Enlightenment. Since that time the concept of the pilgrimage has played a central role in multiple arenas; from the religious to the secular, from the most traditional to the most modern. Smith utilizes this universal device to create her own contemporary allegoric depiction of secular life infused with imagery sometimes drawn from sacred traditions.

Smith has been working with glass for the past twenty years. She has been working on “Pilgrim” the last five years; she first made collage drawings, which were then used as ‘cartoons’ for the later glass painting. She began the glass paintings three years ago at the renowned German glass atelier, Mayer'sche Hofkunstanstalt GmbH-Mayer of Munich.

In preparation for the installation of “Pilgrim,” Smith asked architect Bill Katz to design the standing frames which hold the individual panels. They collaborated on the installation to create a field of images, anchored by three benches, which are also designed by Katz. This design enables the visitor to view the scene in both recto and verso. This installation is conceived of as particular to The Pace Gallery’s 545 West 22nd Street space. It is Smith’s vision that this work will be presented as a permanent piece in a pavilion designed specifically for the work.

The catalogue accompanying Kiki Smith: Lodestar includes an essay and photographs by Virginia Chieffo Raguin, Ph.D., Yale University. Professor Raguin, a professor of Art History and John E. Brooks Chair in the Humanities at the College of the Holy Cross, has published widely on stained glass and architecture. The catalog also includes photographs by Bärbel Miebach and a contribution by the artist.
Kiki Smith: Lodestar coincides with several other projects: Kiki Smith: Sojourn is an exhibition currently on view at the Brooklyn Museum, Elizabeth A. Sackler Center for Feminist Art, through September 12, 2010. Sojourn is the fourth and final venue of a travelling exhibition, which originated at the Museum Haus Esters, Kunstmuseen Krefeld, Germany, and which has changed and evolved in response to the space and context of each subsequent venue. These previous installations were the impetus for Smith to make “Pilgrim,” which she considers to be a parallel narrative to, and from which she includes elements.

The Museum at Eldridge Street recently commissioned Smith and architect Deborah Gans to create a new monumental east window for the 1887 Eldridge Street Synagogue, a National Historic Landmark located on New York’s Lower East Side. This permanent commission marks the final significant component of the Museum’s 20-year restoration and will be unveiled in 2010.

Through August 15, 2010, Seattle's Henry Art Gallery is showing Kiki Smith: I Myself Have Seen It, which explores the role of photography in the development of Smith’s aesthetic and in the creation of her art. The exhibition will travel to the Frances Young Tang Teaching Museum and Art Gallery at Skidmore College from September 17 2010 through December 30, 2011 and to the Mary and Leigh Block Museum of Art, Northwestern University in the spring of 2011.

Kiki Smith (b. 1954, Nuremberg, Germany) is an artist of international prominence whose career has spanned over three decades. She is a leading figure among artists addressing philosophical, social, and spiritual aspects of human nature. Since 1982, her work has been exhibited in nearly 150 solo exhibitions at museums and galleries worldwide and has been featured in hundreds of significant group exhibitions, including the Whitney Biennial, New York (1991, 1993, 2002); La Biennale di Firenze, Florence, Italy (1996-1997; 1998); and La Biennale di Venezia (1993, 1999, 2005, 2009). Her work is held in more than forty important public collections in the United States and abroad.

This year, Smith was the recipient of the Theo Westenberger Women of Excellence Award, as well as the Nelson A. Rockefeller Award from Purchase College’s School of the Arts. Her many accolades also include the Women in the Arts Award from the Brooklyn Museum (2009), the 50th Edward MacDowell Medal (2009), the Medal Award from the School of the Museum of Fine Arts, Boston (2006), the Athena Award for Excellence in Printmaking from the Rhode Island School of Design (2006), the Skowhegan Medal for Sculpture from the Skowhegan School of Painting and Sculpture, Maine (2000), and Time Magazine’s “Time 100 : The People Who Shape Our World” (2006). Smith was elected a member of the American Academy of Arts and Letters, New York, in 2005.

Kiki Smith lives and works in New York City. She has been represented by The Pace Gallery since 1994.
www.thepacegallery.com