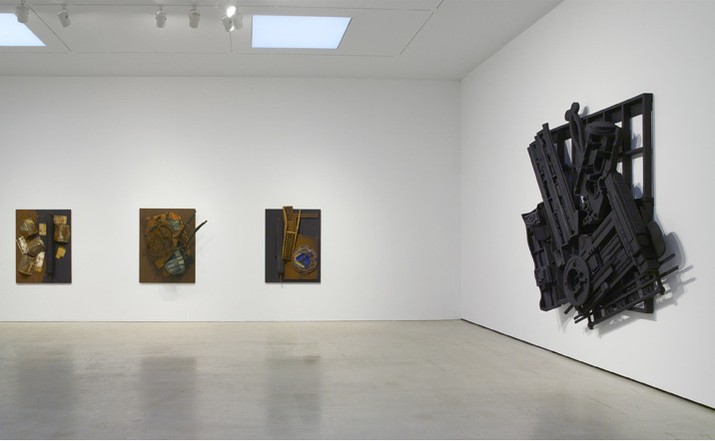 New York—Pace is pleased to announce an exhibition of Louise Nevelson’s rarely seen collages. On view from January 24 to February 28, 2015, at 534 West 25th Street, the exhibition will present several works that have never been exhibited publicly. To accompany the exhibition, Pace will publish a catalogue featuring a new essay by Germano Celant.

Pace’s exhibition runs concurrently with the Los Angeles County Museum of Art’s presentation of Louise Nevelson in L.A.: Tamarind Workshop Lithographs from the 1960s, which highlights works the artist created between 1963 and 1967 at the famed Southern California print shop.

One of the most significant American artists of the twentieth century, Nevelson began producing collages in the mid-1950s. Inspired by her longstanding interest in Cubism and a correspondence with Jean Arp, these works signify an important turn in her approach to art, prompting her remark “the way I think is collage.”

The exhibition features the artist’s earliest collages. Nevelson produced these works at the same time as her monochromatic black, gold and white sculptures, using scraps of wood and metal collected from the streets outside of her Little Italy studio. Describing her process across media, Nevelson said, “I make collages. I join the shattered world creating a new harmony.”

Later in her life, Nevelson produced larger, unpainted assemblages that situate collage as a central theme in all of her work. A departure from her monochromatic work, these works mark an expansion of her use of collage. The exhibition will also include two large-scale, black wall-reliefs, including Spring Street, 1984, which was installed in Nevelson’s home from its completion until her death. These assemblages and wall-reliefs are among the last Nevelson made in her life.

Louise Nevelson (b. 1899 Kiev; d. 1988, New York) emigrated from czarist Russia as a child and grew up in Rockland, Maine. As an adult, she returned to Europe where she studied with Hans Hoffman. Upon her return to the United States, she served as Diego Rivera’s assistant and later as an art instructor in the Works Progress Administration. In 1941, she had her first solo exhibition, and in 1946, was included for the first time in the Whitney Annual exhibition, which she would participate in eleven more times. Nevelson exhibited her first all-black sculptures in the mid-1950s. Although she worked in white and gold and later with painted steel, her developments in the 1950s sustained her work throughout the rest of her life.

Many of the most prominent museums and public collections in the world hold work by Nevelson. Additionally, the artist’s work is permanently installed at several museums, universities and sculpture centers across the United States. In addition to having public sculptures in cities such as Chicago, Los Angeles and San Francisco, New York is home to several of Nevelson’s sculptures including a dedicated plaza in Lower Manhattan.

This is Nevelson’s twenty-fifth exhibition at Pace since joining the gallery in 1963.
www.thepacegallery.com