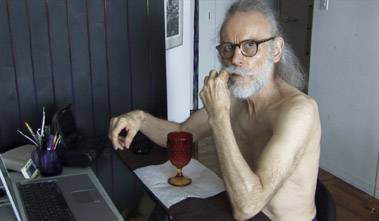 NEW YORK, August 25, 2006—An exhibition of new films by Lucas Samaras will be on view at PaceWildenstein, 534 West 25th Street, New York, from September 12 through October 7, 2006. The artist will be present at the public opening reception on Tuesday, September 12th from 6-8 p.m.
Lucas Samaras: iMOVIES will include six new works. The exhibition features a two-part installation consisting of a 5-1⁄2 minute iMovie of the artist called Ecdysiast, shown synchronically with 24 films of individuals recorded as they watched and responded to Ecdysiast.

Between 1978 and 1981 Samaras conducted the Sittings, his project which focused on subjects invited into his studio. Samaras, a veteran of the happenings, created a performance-like atmosphere by warning the participants that they would be required to undress in his West 71st Street studio and pose nude for 8 x 10 as well as large-format Polaroids while he sat to their right. Twenty-five years later Samaras turns the tables on himself, inviting his subjects to watch a film of him undressing.

Lucas Samaras: iMOVIES also includes PRIVATE, OUTSIDE, HEAD, FOOD and TWEAKS, five compilations of between four and six short films each. These two to five minute movies, shot in or from Samaras’ 62nd floor studio, build upon his first video work, seen in his 2005 exhibition PhotoFlicks (iMovies) and PhotoFictions (A to Z).

Lucas Samaras’ previous foray into film included Self. The 16mm work, a collaboration with writer Kim Levin, premiered at the Museum of Modern Art, New York in 1969. Self was recently on view at the Whitney Museum of American Art in the exhibition Unrepentant Ego The Self-Portraits of Lucas Samaras (2003-2004).

Lucas Samaras (b. 1936 Macedonia, Greece) studied at Rutgers University from 1955 to 1959, and had his first exhibition at the Green Gallery in 1961. Samaras joined PaceWildenstein in 1965, and with this show, celebrates his 30th exhibition with the gallery. Over the years, he has created drawings, furniture, jewelry, paintings, photographs and sculpture, and often incorporates materials such as beads, chicken wire, clay, Cor-ten steel, fabric, pastel, pencil, pins, plaster and oil into his work.