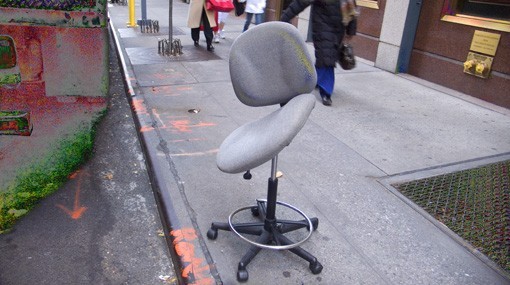 A new photographic series by Lucas Samaras opens on the evening of Thursday, February 21st

NEW YORK, February 5, 2008—A new photographic series by Lucas Samaras entitled NYC Chairs will be on view at PaceWildenstein, 534 West 25th Street, New York City, from February 22 through March 29, 2008. The artist will be present for a public reception on Thursday, February 21st from 6-8 p.m. A catalogue which includes an interview with Samaras by Arne Glimcher accompanies the exhibition.

Lucas Samaras: NYC Chairs features a selection of new color photographs in two sizes, 22" x 36-3/4" and an accompanying pendant with an identical image in 8-1/2" x 14". Samaras created the works over the past year using a small digital Leica camera on daily excursions in and around his mid-town Manhattan neighborhood and the Upper West Side. Originally, Samaras gravitated towards subjects that were readily available, such as street scenes, construction sites, and buildings. Then he focused on seeking out the city’s vast array of bicycles in various states. Ultimately, Samaras turned his attention and camera towards chairs, a recurring subject matter in his work since the late 1950s.

Samaras found unoccupied chairs everywhere: discarded on sidewalks, on display at flea markets, stacked at restaurants, thrown away near brownstone stoops, or waiting near street vendors. After capturing, or as the artist refers to it, “rescuing” a chair with his camera, Samaras returned to his studio to manipulate the images on his computer, aiming to “make them more luxurious, more dramatic, more fantastic.”

In the interview published in the exhibition catalogue, the artist recalls his earliest chairs: “They were short stories. Anathema to those who were trying to flee narratives as if that were possible by just using geometry. I found it productive to consider different sensibilities, representatives so to speak, of different cultures and deviations from normal form. I ended up with twenty-five chairs and dozens of chair drawings in ‘69-70. But it was never the idea that I was going to live with them.”

In the “Chair Transformations” series, begun in 1969, Samaras physically transformed chairs through a wide variety of methods and materials—covering them in mirrors or yarn, entwining them in wool, and painting them in bright patterns. In the mid-to-late 1980s, Samaras returned to the chair as subject, attaching small, found objects—including fake flowers, razor blades, plastic prisms, colored pencils, kitchen utensils, and plastic figurines, to armatures constructed of wire. Throughout his career, Samaras has constructed chairs out of many materials, including Cor-ten steel, wire, Formica, and wood.

Samaras is also widely acclaimed for his pioneering work in photography—the series of images referred to as “AutoPolaroids” and “Photo-Transformations” in which his kitchen chair was used as a prop. Samaras began shooting with the Polaroid 360 in the early ‘70s. Alone in his studio, using a medium removed from formal tradition and technical skill, the Polaroid allowed the artist unlimited creative freedom. Samaras has manipulated and transformed his photographs using many different techniques, including hand-applied ink, and altering the picture surface with his hand or a stylus to move the dye emulsions under the top, clear layer of Mylar. At the age of 65, Samaras began experimenting with computer manipulated photography, blurring the boundaries between art and life, inventing new realities and evoking in his subjects various personas and emotions.

Lucas Samaras (b. 1936 Macedonia, Greece) studied at Rutgers University from 1955 to 1959, and had his first exhibition at the Green Gallery in 1961. PaceWildenstein has presented dozens of exhibitions of his work since 1965. Over the years, he has created drawings, furniture, jewelry, paintings, photographs, sculpture and room-sized installation using a variety of material including beads, chicken wire, clay, Cor-ten steel, fabric, mirrors, pastel, pencil, pins, plaster and oil. Samaras’ mirrored structures are in several museum collections, including the National Gallery of Art, Washington D.C.; Wadsworth Atheneum Museum of Art, Hartford; Albright-Knox Art Gallery, Buffalo; Los Angeles County Museum; and Denver Museum of Art.

In addition to Unrepentant Ego, a recent survey at the Whitney Museum of American Art, Samaras has been the subject of seven retrospectives. These include Lucas Samaras: A Retrospective, National Gallery of Greece, Alexandros Soutzos Museum, Athens (2005); Lucas Samaras – Self: 1961-1991,organized by the Yokohama Museum of Art, Japan (1991-92); Lucas Samaras: Objects and Subjects 1969-1986, organized by the Denver Art Museum, which later traveled to five museums including the High Museum, Atlanta and Museum of Fine Arts, Boston (1988-89); a retrospective of his Polaroid photographs from 1969-1983 that traveled to museum venues in twelve European and American cities (1983-84); Samaras Pastels, a drawing survey organized by the Denver Art Museum that traveled to six additional venues (1981-83); his first Whitney retrospective (1972-73); and Lucas Samaras: Boxes, an exhibition at the Museum of Contemporary Art, Chicago (1971).

Samaras’ work has also been included in several important group shows. In 1980, Samaras represented the United States at the Venice Biennale, U.S. Pavilion, in Drawings: The Pluralist Decade. The show then traveled to museums in Spain, Portugal, and Norway until June 1981. Other important shows include Documenta 6 (1977), Documenta 5 (1972), and Documenta 4 (1968), Kassel, West Germany and the 28th Biennial Exhibition at The Corcoran Gallery of Art, Washington, D.C. (1963).