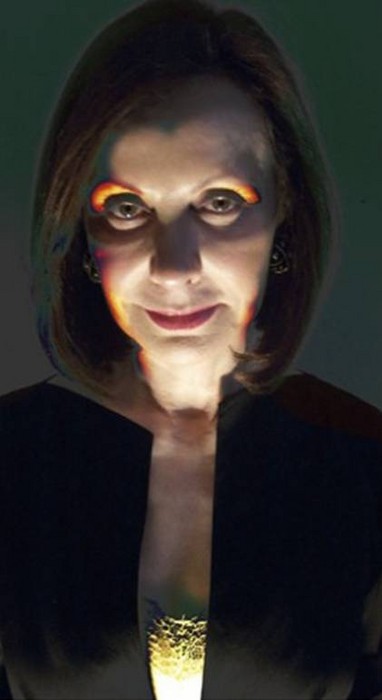 The Pace Gallery is pleased to present a new series of dramatic digital portraits by Lucas Samaras. Lucas Samaras: Poses / Born Actors will open at 534 West 25th Street on Tuesday, November 9th and will be on view through December 24th, 2010. A full-color catalogue with essays by Arne Glimcher and Pierre Alexandre de Looz, writer and architect, will accompany the exhibition.

In this new series, Samaras, who often portrays the leading role in his work, turns the lens on his subjects: “born actors.” Lucas Samaras: Poses / Born Actors, created from 2009–2010, features approximately one hundred Photoshop-manipulated digital photographs of art world luminaries, collectors, critics, and friends, including Sandra Brant, David Byrne, Chuck Close, Loris Gréaud, Agnes Gund, Jasper Johns, Leonard Lauder, Glenn Lowry, Sterling Ruby, Cindy Sherman, Ingrid Sischy, Philip Tsiaras, Adam Weinberg, and Robert Whitman, among others. Using the Hollywood headshot as his point of departure, Samaras captures his subjects’ heads lit from below, sculpting their features with disconcerting light and revealing often concealed vulnerabilities and personas. A large majority of the actors accepted Samaras’s invitation to wear glasses, creating demonic shadows as the light deflects off the contours of the lenses and frames and casting the subjects’ faces into further enigma. “The principle behind any headshot is the same,” de Looz writes, “that is to say, ‘this is Lucas,’ an actor without the mask. But a ‘born actor’ is never without a cultural mask.”

Recalling the artist’s pioneering work with Polaroid film (“AutoPolaroids,” 1969–71 and “Photo-Transformations,” 1973–76), in which Samaras used hand-applied ink and manipulated the emulsions beneath the film to create extraordinary effects, the artist retouches the new photographs in Photoshop—not to conceal as the media might, but to exaggerate and reveal. Poses / Born Actors, which carries conscious cultural references—including the 1951 sci-fi thriller, The Man from Planet X, also relates to Samaras’s Sittings, 1978–1981, when the artist invited participants to undress in his studio and pose nude while he photographed them. Twenty-five years later, the artist would turn the tables with Ecdysiast and Viewers, 2006, filming his subjects’ reactions as they watched him undress, and presenting the work as a two-part installation which is now in the permanent collection of The Museum of Modern Art. The installation also travelled to Italy for the artist’s solo exhibition, Paraxena, at the Venice Biennale in the summer of 2009. Although some of the original subjects reappear in Poses / Born Actors, the show “differs significantly from the previous series as Samaras becomes involved in the specific sitter’s personality,” Arne Glimcher explains; “These are head shots prepared for Lucas the casting agent to fulfill specific roles in a Lucas Samaras production.”

A key player in the Happenings in the ‘60s along with artists such as Jim Dine, Allan Kaprow, Claes Oldenburg, George Segal, and Robert Whitman, Samaras also briefly studied acting with Stella Adler. The evolution of Poses / Born Actors can be traced to some of Samaras’s earliest works. In 1962 the artist procured a headshot, which would become a recurring element in many of his pieces: mounted on masonite and pierced with pins (Untitled, 1963, The Metropolitan Museum of Art) and reproduced on the surface and interiors of some of his mixed-media works and boxes, including a menacing, pin-covered box now in the collection of Los Angeles County Museum of Art (Untitled, 1963) and Box #27, 1965 (The Menil Collection, Houston). In 1964, Samaras starred in Raymond Saroff’s film The Real Thing, where he famously covered advertisements in the subway with images of his own face. Poses / Born Actors can also be seen to relate to Samaras’s mirrored structures, 1963–2007, which today can be found in permanent collections at museums worldwide, including the Albright-Knox Art Gallery, Buffalo; Denver Art Museum; Los Angeles County Museum; The National Gallery of Art, Washington, D.C.; The National Museum of Contemporary Art, Athens; Wadsworth Atheneum, Hartford; and the Whitney Museum of American Art, New York.