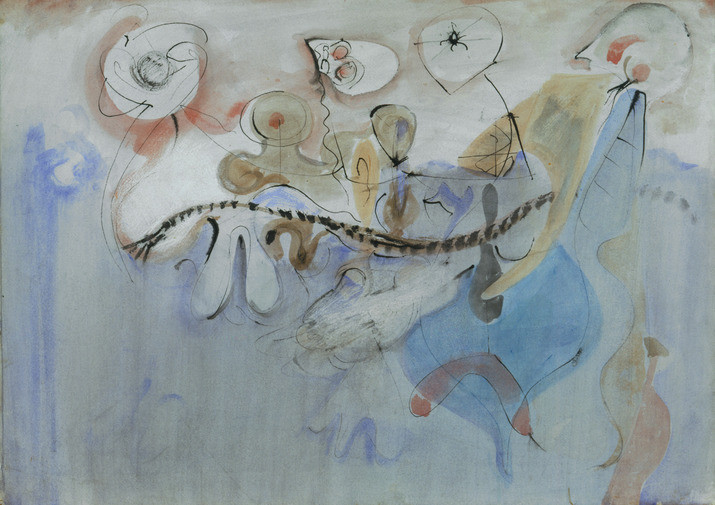 New York—Pace Gallery is pleased to present Mark Rothko: The Watercolors 1941 – 1947, an exhibition of more than 30 works on paper by the seminal artist. The exhibition will be on view at 32 East 57th Street from May 2 to June 21, 2014. This is the twelfth Rothko exhibition presented by Pace since 1978 featuring works from the artist’s estate and heirs. It is accompanied by a fully illustrated catalogue with an essay by James Lawrence, a critic and historian specializing in postwar and contemporary art.

Executed in watercolor and in some cases ink, graphite, or charcoal on paper, nearly all of the works range from approximately 20 x12” to 41 x 27” in size, and a few have painting on both the recto and verso.

Born in 1903, Rothko began exhibiting in galleries in the late 1920s. After working with traditional subject matter in a style influenced by Modern artists, notably Milton Avery, starting in the early 1940s Rothko deeply influenced by the Surrealists, many of whom were fleeing to America from wartime Europe. As a result, his interest moved from making recognizable images to presenting archetypes of the subconscious – highly stylized and at times totemic figures or markings. His private studies included reading Carl Jung and Sigmund Freud and mythology which led him to symbols and figures that expressed "man's primitive fears and motivations no matter in which land or what time,” he later wrote. With fellow artists Adolph Gottlieb and Barnett Newman, Rothko asserted “spiritual kinship with primitive and archaic art,” yet he also moved in the following years increasingly towards greater abstraction and by 1947 had distanced himself from the dogma of Surrealism.

Mark Rothko: The Watercolors 1941 - 1947 presents works from a rich period of experimentation and innovation. As Lawrence notes in his catalogue essay, Rothko’s approach “shifts among layering, modeling of contours, and expressive scribbling that allows the sweeping tonal fields to serve as form, ground, or atmosphere.” He later adds that by the mid-1940s, Rothko’s “allegiance to conventions of spatial order in painting had withered to the point where depth and contours could barely be detected, much less interpreted... Rothko used the fluidity of watercolor to erode distinctions and diminish resolution. The results convey realms of emergence or submersion.”

None of the work in the exhibition bears a title as, throughout the period of the exhibition, Rothko sought a visual expression of deeply psychological and spiritual states. During this highly experimental period, Rothko explored a wide range of palettes, from soft grays and blues offset by muted reds to vibrant blues and reds to heavy browns and dark grays. The drawings on view suggest human figures and loosely defined biomorphic shapes that, like watercolor, bleed into their surroundings, though his technique was highly varied. “Throughout the watercolors from this period,” Lawrence writes, “the range of techniques that Rothko employed proliferated dramatically. Varieties of scribbling, sgraffiti, dry brushing, scraping, soaking, rubbing, and techniques for which no name exists, emerged and thrived.”

Mark Rothko was born in Dvinsk, Russia and studied at Yale University (1921-1923) and the Art Students League and New York School of Design (1924).

Rothko is the subject of numerous publications, including the catalogue raisonné, Mark Rothko: The Works on Canvas by David Anfam, Yale University Press, 1998.

Since his first one-man museum exhibition, in 1933 at the Portland Museum of Art, Rothko’s work has been the subject of numerous monographic exhibitions, many of which have traveled, including those held at the Tate Modern, London; Palazzo delle Esposizioni, Rome; The State Hermitage Museum, St. Petersburg; Fundació Joan Miró, Barcelona; Tokyo Metropolitan Art Museum; Solomon R. Guggenheim Museum, New York; Kunsthaus Zürich; and the Museum of Modern Art, New York. The 2012 exhibition Mark Rothko: The Decisive Decade, 1940–1950 was exhibited at four museums in the U.S. including the Columbia Museum of Art, South Carolina; Columbus Museum of Art, Ohio; Denver Art Museum, and Arkansas Arts Center, Little Rock.