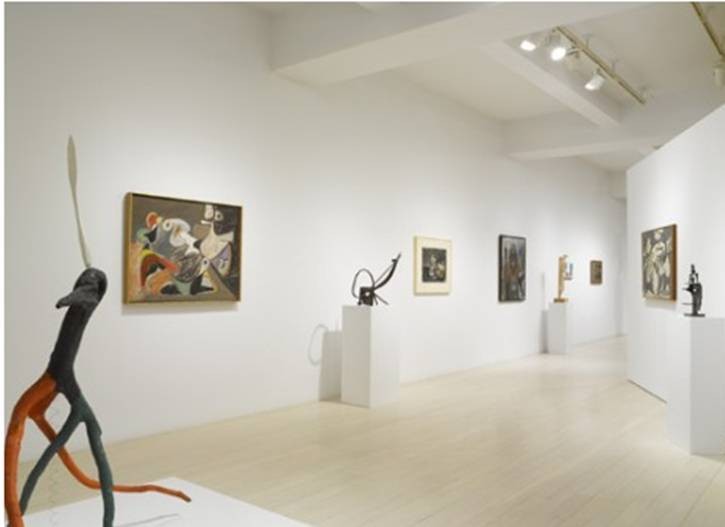 The Pace Gallery is pleased to present Mythology, a group exhibition exploring the influence of myths and archetypes on the origins of Abstract Expressionism. As many midcentury artists abandoned figurative work, they embraced the long artistic tradition of looking to primitive myths and archaic art for inspiration, using mythology as both a reference to and an expression of primal human passion. Focusing on moments of stylistic transformation from figuration to abstraction, the exhibition includes paintings, sculptures, and works on paper in which non-figurative and biomorphic forms call forth an eternal subject matter. Mythology will be on view at 32 East 57th Street from February 22 through April 14, 2012, with a public reception on Tuesday, February 21 from 6 to 8 p.m.

The exhibition begins with the work of Surrealists Joan Miró, Max Ernst, Roberto Matta, and André Masson, whose menageries of fantastic characters and interest in automatism informed the work of groundbreaking American artists Arshile Gorky, Alexander Calder, and Isamu Noguchi. Mythology continues through the early work of Willem de Kooning and David Smith and concludes with work of the early ‘40s by other members of the burgeoning Abstract Expressionist movement including Mark Rothko, Jackson Pollock, Adolph Gottlieb, Barnett Newman, and Frederick Kiesler, looking at the ways in which these artists extended the lessons of Picasso and the Surrealists while pushing abstraction in a new and decisively American direction.

The Pace Gallery is pleased to include two important paintings and a selection of drawings by Arshile Gorky, who was often referred to as the last of the great Surrealists and the first of the Abstract Expressionists. The gallery is honored to work with the Arshile Gorky family on this exhibition. On the occasion of the exhibition, the gallery will publish a catalogue including a conversation between Marc Glimcher and Matthew Spender, art historian and member of the Board of Directors of the Arshile Gorky Foundation. One of the paintings and a number of the works on paper are related to Gorky’s iconic Nighttime, Enigma, and Nostalgia series, a group of complex works that crystallize the artist’s investigations into iconography that fuses elements of Cubism and Surrealism.

Other highlights from Mythology include de Kooning’s small-scale abstract painting Father, Mother, Sister, Brother (1937), which was recently included in The Museum of Modern Art’s 2011 exhibition de Kooning: A Retrospective; an important painting by Newman most recently on view at the Menil Collection in Houston; three major sculptures by David Smith, including the open steel sculpture Swung Forms (1937); and two paintings and four works on paper by Rothko.

Some of the works on view explicitly reference Greco-Roman, Babylonian, or Judeo-Christian myths—as in Noguchi’s alabaster sculpture Leda (1942), Rothko’s large-scale canvas Rites of Lilith (1945), or Adolph Gottlieb’s painting The Eyes of Oedipus (1941)—while others address mythology more obliquely or stylistically, as artists began to abandon the figure in favor of increasingly symbolic abstract forms that allude to universal and enduring values that transcend time and culture. The recurring mythological theme of the transformation from one state to another is exemplified in the biomorphic ovoid shapes, sometimes resembling hieroglyphs and amoebae, that appear in works from that era. Often inspired by the Surrealist techniques of delving into the subconscious through automatism during the creative process—a method espoused by Matta to younger artists like Gorky—the fluidity of the shapes evokes a vision of primordial life.

In a 1943 radio broadcast of the WNYC program “Art in New York,” in which Gottlieb and Rothko discussed the role of myth in their work, Rothko commented on his and his peers’ preoccupation with mythology that “if our titles recall the known myths of antiquity, we have used them again because they are the eternal symbols upon which we must fall back to express basic psychological ideas. They are the symbols of man's primitive fears and motivations, no matter in which land or what time, changing only in detail but never in substance, be they Greek, Aztec, Icelandic, or Egyptian. And modern psychology finds them persisting still in our dreams, our vernacular, and our art, for all the changes in the outward conditions of life. Our presentation of these myths, however, must be in our own terms, which are at once more primitive and more modern than the myths themselves—more primitive because we seek the primeval and atavistic roots of the idea rather than their graceful classical version; more modern than the myths themselves because we must re-describe their implications through our own experience.”

In the same conversation, Gottlieb remarked of his work, “I think that anyone who looked carefully at my portrait of Oedipus . . . will see that this is not mythology out of Bulfinch. The implications here have direct application to life, and if the presentation seems strange, one could without exaggeration make a similar comment on the life of our time.”

In February, the Museum of Modern Art will screen the new documentary “Without Gorky,” the personal story of Gorky’s widow and daughters revisiting his legacy and confronting the challenges of life with an artistic genius. Directed by the artist’s granddaughter, Cosima Spender, and centered around conversations with the artist’s widow, Agnes “Mougouch” Magruder Gorky, the documentary will be shown as part of Documentary Fortnight 2012: MoMA's International Festival of Nonfiction Film and Media. The screenings will take place on Sunday, February 19 at 3 p.m. and Monday, February 20 at 4 p.m.
www.thepacegallery.com