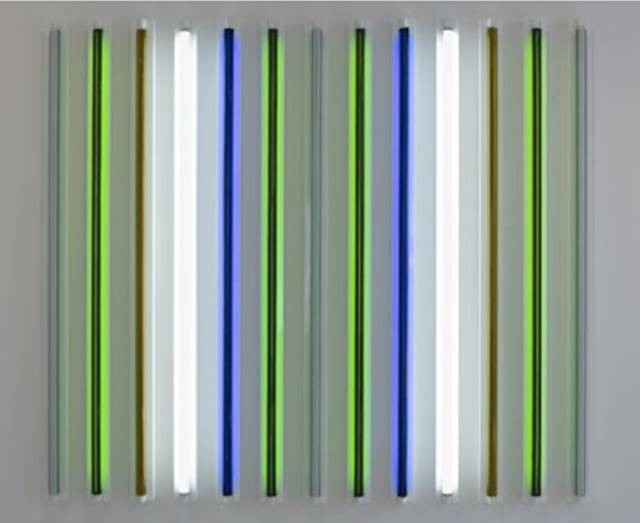 The Pace Gallery is pleased to present an exhibition of new work from 2010 by Robert Irwin. Robert Irwin: Way Out West will be on view at 32 East 57th Street from November 12, 2010 through January 29, 2011. An opening reception will be held on Thursday, November 11th from 6 to 8 p.m.

Robert Irwin, a pioneering artist of the “Light and Space” movement, returns to the gallery this fall with an exhibition of new fluorescent light tube sculptures from 2010. Way Out West is an experiment with the perceptual qualities of light, playing with rhythm, texture, densities, temperature, and chromatic relationships. Wrapping fluorescent tubes in as many as ten colored gels to attain a range of hues, Irwin mounts the lights in vertical groupings on the wall. The largest works in the show, Way Out West and Pacific Jazz, measure six-feet tall by twenty-seven fixtures wide. Other works in the exhibition include Little Jazz and So Cal, six-feet tall by thirteen fixtures wide, in addition to four groupings of two to three fixtures in congruent heights of four, six, and eight feet tall.

The light tube sculptures have the ability to pass through different states, including the off position, dramatically altering the compositions, mood, and atmosphere of the surrounding environment. With each shift, chromatic and tonal relationships change, temperatures move from warm to cool, and the quality of light in the room transforms. The light from the environment plays an integral role in the work, producing an effect even more dramatic than that which radiates from within. One light tube reflects on another, and the spaces between the light tubes allow two adjacent colors to refract, producing a vast range of hues. The artist will determine the state that each of the light tube sculptures will remain in throughout the exhibition installation.

Way Out West reframes and expands upon a dialogue with perception that has pervaded Irwin’s practice for nearly half a century. The exhibition follows Primaries and Secondaries, a major retrospective exhibition at the Museum of Contemporary Art, San Diego (2007–2008). Irwin began working with fluorescent light tubes in the early seventies—a pivotal time in his career when his focus shifted “from matter to energy.” Drawn to the medium for its ability to “articulate space,” in one of his earliest installations, Three-Plane Triangulation (Berkeley Art Museum, 1979), the artist cantilevered the fluorescent light tubes across the chasm of the ceiling, giving the effect of having heightened the interior vault. Yet Way Out West is perhaps most closely related to the artist’s site-conditioned installation commissioned by Dia Center for the Arts’ former warehouse space in Chelsea (1998–2000). In Excursus: Homage to the Square3, Irwin transformed his initial installation at Dia (Prologue: x 183), a series of chambers made of fine mesh scrims lit primarily by natural light, into an environment of color—referencing Josef Albers in the title. In the installation, the normally transient quality of light took on a sense of physicality imbued with a vast range of hues.

More recently, in Light and Space, 2007, one of the five new site-conditioned installation works created for the Museum of Contemporary Art, San Diego’s galleries for Primaries and Secondaries, Irwin mounted white fluorescent tubes, arranged in a diagonal, non-repetitive grid pattern, to a fifty-foot wall. The work led to Light and Space II, 2008, a permanent installation at the Indianapolis Museum of Art which encompasses museum goers in a tunnel of light as they move between the panels and the three main escalators of the museum. It also relates to a site-conditioned installation at The Pace Gallery in 2009, Red Drawing White Drawing Black Painting.

Irwin recently completed the second phase of the installation of a primordial Palm Garden at the Los Angeles County Museum of Art which began in 2007 and will continue to grow and evolve. Working with the requirements and conditions of dozens of varieties of palms—a tree iconic to Southern California—the artist set out to make a garden that “represents a specific place in time.” Capitalizing on the unique site location of the La Brea Tar Pits, Irwin uses some of the earliest plants and flowering plants—including Cycads, which are said to be among the first plants on earth. Irwin is also involved in a project for an outdoor space along the side of a federal courthouse, scheduled to be built in San Diego in 2013.

Robert Irwin (b. 1928, Long Beach, California) became the first artist to receive the John D. and Catherine T. MacArthur “Genius” Award in 1984, a five-year fellowship which lasted until 1989. His many accolades include the Thomas Jefferson Foundation Medal in Architecture (2009), an appointment to the Advisory Policy Panel for the National Endowment for the Arts (1981), and a John Simon Guggenheim Fellowship (1976), among others. Irwin was elected as a member of the American Academy of Arts and Letters in 2007.

Irwin studied at L.A.’s Art Institutes (Otis, 1948–50; Jepson, 1951; and Chouinard, 1952–1954), and holds Honorary Doctorates from the San Francisco Art Institute (1979) and Otis-Parson's Art Institute, CA (1992). He has lectured in the art, architecture, philosophy, and perceptual psychology departments of more than 150 universities and art institutes in forty-eight states. Irwin developed the graduate program at the University of California, Irvine in the late sixties, working with many now successful artists such as Ed Ruscha, Larry Bell, Vija Celmins, Alexis Smith and Chris Burden, among others. Since that time he has held a number of prestigious professorships and lectureships, including the Kiley lecturer at Harvard University (2001), the Yaseen lecturer at The Metropolitan Museum of Art, New York (1990), the Andrew Ritchie lecturer at Yale University (1988), the Honorary Cullinan professor at Rice University (1987–88), the J. Paul Getty lecturer at the University of Southern California (1986), and the John J. Hill professor at the University of Minnesota (1981).

Irwin has conceived of fifty-five site projects since 1975, ranging from the architectural and grounds design of Dia: Beacon Center for the Arts (completed in 2003) to the Central Gardens for the Getty Center for Los Angeles, California (completed in 2005). His work has been featured in more than sixty solo exhibitions and is held in more than thirty public collections worldwide, including the Centre Georges Pompidou, Paris; The J. Paul Getty Museum, Los Angeles; Hirshhorn Museum and Sculpture Garden, Smithsonian Institution, Washington, D.C.; Museo Nacional Centro de Arte Reina Sofia, Madrid, Spain; The Museum of Modern Art, New York; Solomon R. Guggenheim Museum, New York; and the Whitney Museum of American Art, New York.

Robert Irwin lives and works in San Diego, California. He has been represented by The Pace gallery since 1966.
www.thepacegallery.com