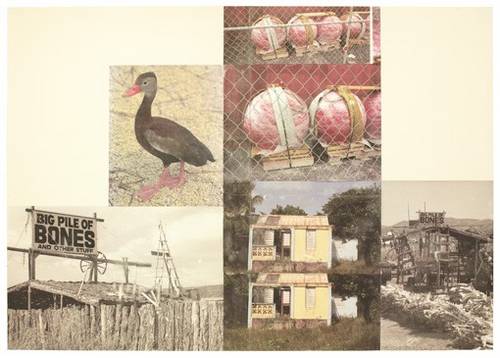 The artist will be present for a public opening this Thursday, October 26th

NEW YORK, October 24, 2006—PaceWildenstein is honored to present Robert Rauschenberg’s new series of Scenarios paintings and a cast bronze sculpture entitled The Ancient Incident (Kabal American Zephyr) on view from October 27 through November 25, 2006 at 32 East 57th Street, New York. A public reception will be held for the artist this Thursday, October 26th from 6-8 p.m. A color catalogue accompanies the exhibition.

The nine paintings, each measuring a little over 7' x 10', are visual collages created from Rauschenberg’s vast archive of found and self-generated photographs, which then get transferred onto aluminum panels covered in polylaminate synthetic fabric. Rauschenberg has always been recognized for his innate ability to create a striking commentary on the surrounding landscape, and his Scenario paintings are undeniably Americana in nature, focusing on rural America, the South and New York City.

The Ancient Incident (Kabal American Zephyr) relates to a sculptural series that Rauschenberg began in 1981 and has continued to work on until present day. The sculptures contain fragmented images juxtaposed incongruously inviting the viewer to create his or hew own narrative.

Robert Rauschenberg (b. 1925, Port Arthur, TX) briefly attended the University of Texas and served in the U.S. Navy during World War II prior to studying art. Between the years of 1947 and 1952, Rauschenberg attended the Kansas City Art Institute, the Academie Julien in Paris, the Arts Student League in New York and studied with Josef Albers at Black Mountain College in North Carolina where he formed friendships with John Cage, Merce Cunningham and David Tudor. In 1951 Rauschenberg was invited to exhibit at the Betty Parsons Gallery in New York City, and two years later he created what was to become his well-known Combines, works that incorporated painting and a variety of found objects. The juxtaposition of different media (lithography, painting, photography, silk-screening and sculpture) and their interplay comprise Rauschenberg’s chief interests, and throughout his career his work has been marked by a sense of experimentation and whimsy. During the 1950s Rauschenberg also began his lifelong involvement and affiliation with theatre and dance, designing sets and costumes for a variety of productions worldwide.

Most recently, The Museum of Contemporary Art in Los Angeles organized “Robert Rauschenberg: Combines”, a retrospective of the artist’s Combine paintings and sculptures completed during the years 1953 to 1964. The exhibition debuted at The Metropolitan Museum of Art, New York, in December 2005 and then traveled to The Museum of Contemporary Art from May to September 2006. “Robert Rauschenberg: Combines” is currently on view at the Centre Georges Pompidou, Paris, through January 15, 2007. The next, and last, venue is the Moderna Museet, Stockholm (February–April 2007).

The artist’s work can be found in over 70 public museum collections throughout the United States and abroad.