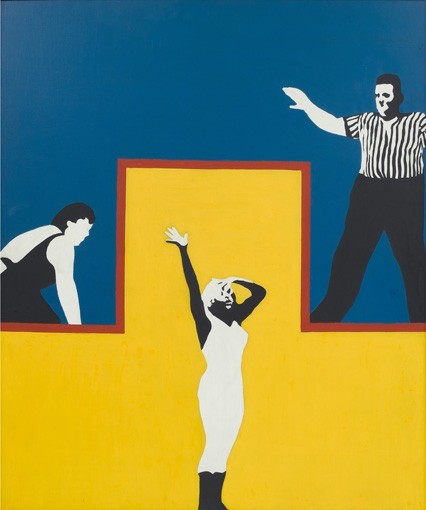 ROSALYN DREXLER
I am the Beautiful Stranger
Paintings from the '60s

NEW YORK, March 6, 2007—PaceWildenstein will exhibit a survey of Rosalyn Drexler paintings from the 1960s, entitled I am the Beautiful Stranger, from March 16 through April 21, 2007 at 545 West 22nd Street, New York City. More than 35 oil or acrylic and collage on canvas paintings will be on view, some for the first time in many years. A full-color catalogue with an essay by Arne Glimcher will accompany the exhibition. The artist will be present at the public opening on Thursday, March 15th from 6-8 p.m.

Rosalyn Drexler (b. 1926) first exhibited with The Pace Gallery in a group show in Boston in 1964. The following year she was included, along with Roy Lichtenstein, Andy Warhol, Tom Wesselmann and others, in the First International Girlie Exhibit, a survey of the influence of the “pinup girl” on contemporary art at the recently opened Pace Gallery in New York.

I am the Beautiful Stranger will reexamine the distinct contributions Drexler made as the Pop Art Movement was coalescing. As early as 1960, Drexler was using the icons of Pop Culture as the organizing subject matter of her work. Images of gangster B-movies, tabloid journalism, and pulp detective novels were collaged directly onto the canvases and then entirely “re-painted” to create the kind of graphically transformed and narratively intensified work associated with the great pioneers of art in the early sixties. Drexler went on to hone her technique to powerfully expose society’s raw nerves in her emotionally charged, ambiguous scenes of sex, violence and the isolation of man in the 20th century.

Works on view in I am the Beautiful Stranger include studies and paintings for Men and Machines, a series devoted to the post-war fascination and use of technology, and Is it True What They Say about Dixie? (1966), a portrait of Alabama’s segregationist Sheriff “Bull” Connor and fellow supporters. They also range from the cinematic and psychologically charged Marilyn Pursued by Death (1963) to the simultaneously sunny but corporately bland depiction of Lear Executive (1967). The paintings evoke an era through their style and subject matter but remain current through their broader connection to media and American cultural issues.

In his catalogue essay, Arne Glimcher remarks that “her art is central to the American avant garde’s awakening to popular culture as source material in the creation of a new aesthetic of objectivity after the extremely subjective sensibility of Abstract Expressionism and it’s concept of the sublime.... You had to think about her art. Its imagery was complex and was much harder to immediately recall than her contemporaries, iconic in incident rather than image.”

Rosalyn Drexler’s first solo exhibition was held at the Reuben Gallery in New York in 1960. A series of one-person and group shows followed, and in 1986 the artist was the subject of Intimate Emotions: A Retrospective of Paintings at the Grey Art Gallery, New York University. Curated by Thomas Sokolowski, now the director of the Andy Warhol Museum in Pittsburgh, the exhibition traveled to the Greenville County Museum of Art, South Carolina and The University of Iowa Museum of Art.

Drexler’s work was again examined in three recent surveys: Rosalyn Drexler and the Ends of Man at the Paul Robeson Gallery, Rutgers, The State University of New Jersey (2006); Rosalyn Drexler; To Smithereens: Paintings 1961–2003, held at the Rosenwald-Wolf Gallery, The University of the Arts, Philadelphia (2004); and I Won't Hurt You: Paintings 1962-1999 Nicholas Davies Gallery in association with Mitchell Algus Gallery, New York City (2000).


Notable museum shows over the years have included: Pop Art: U.S./U.K. Connections '56-'66 at The Menil Collection, Houston (2001); The New Portrait at P.S. 1, Long Island City (1984); Another Aspect of Pop Art at P.S. 1, Long Island City, NY (1978); (1972 at Hirshhorn? Ask Archives); Pop Plus at the Whitney Museum of American Art (1977); American Pop Art at the Whitney Museum of American Art (1974); The Harry N. Abrams Family Collection at the Jewish Museum, NY (1966); Dealer’s Choice: An Exhibition of Paintings, Drawings, and Prints at the Contemporary Arts Museum, Houston (1965-6); Eleven from the Reuben Gallery at the Guggenheim Museum (1965); Pop Art and the American Tradition at the Milwaukee Art Center (1965); The Painter and the Photograph organized by the Rose Art Museum, Brandeis University, MA (1964) (traveled); and Mixed Media and Pop Art at The Albright-Knox Art Gallery, New York (1963), among others.

Rosalyn Drexler’s borrowed references extend beyond her own work as an artist. Andy Warhol illustrated a theatrical side of her in his 1962 prints Album of a Mat Queen. These works depicted the artist as “Rosa Carlo, The Mexican Spitfire,” a role she invented while touring the U.S. as a professional wrestler in 1951.

Rosalyn Drexler is also an accomplished author and playwright. She won three Obie Awards for the Off-Broadway productions Home Movies (1964), The Writer’s Opera (1979), and Transients Welcome (1985). In 1974 Drexler was awarded an Emmy for writing excellence for the TV special The Lily Show...A Lily Tomlin Special, which aired on CBS. Over the years, four Rockefeller Grants for playwriting have been awarded to her on separate occasions: 1986, 1968, 1965, and 1964.

A Guggenheim Fellowship was bestowed upon her in 1970. Drexler also received two Pollock-Krasner awards in painting in 1994 and 2000, and was the recipient of a Grant in Painting from the Bunting Fellowship Program at Harvard/Radcliffe from 1997-8. The artist was a Yaddo Fellow in 1980 and a MacDowell Fellow in 1965. She has been an avid novelist since 1965. Chiasmus Press will publish her forthcoming novel Vulgar Lives. She has also authored Art Does (Not!) Exist (1996); Bad Guy (1982); The Cosmopolitan Girl (1975); To Smithereens (1972); and I am the Beautiful Stranger (1965). Drexler has also published Rocky the novelization under the pseudonym Julia Sorel.

Her work can be found in the collections of museums such as The Whitney Museum of American Art, The Wadsworth Athenaeum, The Greenville County Museum of Art, The Hirshhorn Museum and Sculpture Garden, and The Walker Art Center.

Additional information for Rosalyn Drexler: I am the Beautiful Stranger; Paintings from the '60s is available upon request by contacting Jennifer Benz Joy, Public Relations Associate, at 212.421.3292 or via email at jjoy@pacewildenstein.com