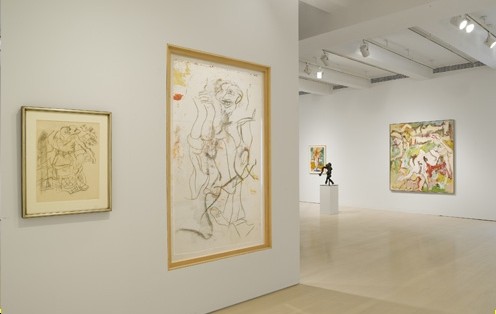 The Pace Gallery is honored to present Willem de Kooning: The Figure: Movement and Gesture, on view at 32 East 57th Street from April 29 through July 29, 2011. This will be the first exhibition at Pace devoted to the artist since the gallery announced exclusive representation of the estate last fall. Willem de Kooning: The Figure: Movement and Gesture features nearly forty paintings, drawings, and sculptures from the late 60s through the late 70s, including a number of rarely seen paintings. A catalogue with an essay written by art historian Richard Shiff will accompany the exhibition. An opening reception will be held at the gallery on April 28 from 6 to 8 pm.

From the late 60s to the late 70s de Kooning explored the figure with new gestural liquidity, merging the figure into landscape and working in sculpture for the first time. The Figure: Movement and Gesture focuses on the movement of transformation from figuration into abstraction and the complex ways that de Kooning depicted motion as he rendered the human figure. “The figure,” de Kooning stated during this period, “is nothing unless you twist it around like a strange miracle.” The artist twisted, turned, and contorted the figure into the landscape as he investigated form, blurring the edges into abstraction and bringing it back into moments of clarity.

This new consideration of the figure coincided with de Kooning’s permanent move to the Hamptons from Manhattan in 1963 and a growing interest in a pastoral vocabulary. As de Kooning resumed painting in his new studio, the figures that emerged were decidedly different from his anatomically distorted, wild-eyed women from the 50s. In contrast to the dark lines of charcoal or black enamel that bound those earlier compositions, brushstroke and color were freed from form. As the artist experienced the motion of the figure and of his own strokes the distinction between figure and ground diminished until woman was no longer differentiated from landscape.

In Woman, 1969, a rarely seen painting, on view here for the first time in New York, de Kooning pulls the twisting figure out from fields of color. Amityville, 1971, reveals glimpses of “feet, hands, and perhaps a central torso,” Shiff writes, “But what do we actually see? The bright colors—white, yellow, red, and blue, all distributed nearly equally throughout the field of this image—create a sensory tension between the linear configurations and the chromatic contrasts. To concentrate on the one is to be distracted by the other, with the result that perceptual movement—now this, now that—is built into the painting.”

De Kooning’s process of building a painting was entwined with the movement that it depicted; insistent on working each painting from all four sides, he rotated the paintings into different orientations—a vertical composition becoming horizontal and vice-versa. As he turned the image of the figure around in his mind, considering it from every angle, “it was touch,” Shiff explains, “that guided his contact with the pictorial surface.” At times de Kooning drew with his eyes closed, with his left hand or both hands, drawing from the moving image on a television screen, feeling his own body into the position of the figures that he would paint—internalizing the motion he wished to depict. The paintings mutated constantly, rarely considered finished, and a day’s work was often scraped down to begin anew over the traces of pigment that preceded it.

De Kooning worked on multiple paintings simultaneously, using vellum to invert, mirror, or replicate a movement and transfer the image from one work to another or to study a movement from both sides, working on both recto and verso of the page. Examples of the artist’s works on vellum will also be on view, mounted so that they will be visible from both sides. Twenty drawings will provide a glimpse at the quickest, most direct expression of hand to paper. “[My] drawings are fast,” de Kooning once remarked, “like snapshots.”

The time period presented coincides with de Kooning’s first foray into sculpture in 1969, the result of a chance encounter on a visit to Rome with an old friend who owned a foundry. Working with clay enabled the artist to connect to the human body without the interruption of the brush, and he responded to the visceral act of pushing, squeezing, and shaping the form as he considered it in three dimensions. In 1971 he began sculpting again in his East Hampton studio, making works larger than those he had made abroad, often working with dexterous wire armatures that could accommodate the heavy masses of wet clay he applied. In 1972, de Kooning made several figures related to the paintings that immediately preceded his work with sculpture, such as Cross-legged Figure (1972), a bronze figure twisted around a central axis with its limbs flayed outwards. Hostess (1973), a bronze sculpture measuring 49" x 37" x 29," will also be on view.

Willem de Kooning’s relationship with Pace dates to the gallery’s origins in 1963 and spans five decades, during which the gallery has presented more than a dozen exhibitions devoted to the artist. These include three groundbreaking shows that have greatly contributed to the scholarship on de Kooning, providing new revelations and insight into his richly nuanced career. De Kooning/Dubuffet: The Women (1991) was the first full-scale exhibition to pair both artists’ series of women, painted almost simultaneously on each side of the Atlantic; De Kooning/Dubuffet: The Late Works (1993) explored affinities in the final works of the artists, and Willem de Kooning and John Chamberlain: Influence and Transformation (2001) examined two Abstract Expressionists working across generations and mediums.

At Pace, the de Kooning estate is reunited with contemporaries and friends from the artist’s life, including the estates of Adolph Gottlieb, Isamu Noguchi, Ad Reinhardt, and Mark Rothko. For decades Pace artists ranging from Chuck Close and Jim Dine to Robert Irwin have noted de Kooning’s influence and their own admiration for his work. Born on April 24, 1904 in Rotterdam, de Kooning would become recognized as a leader of the New York school by the 1950s. In 1948, Josef Albers invited de Kooning to teach at Black Mountain College, where Robert Rauschenberg and John Chamberlain, among others, studied. Moving from figuration to abstraction—and at times working simultaneously in both, de Kooning’s work underwent radical stylistic shifts from decade to decade.

This exhibition precedes a major retrospective devoted to the artist at The Museum of Modern Art, New York, which will examine the development of the artist’s career over nearly seven decades through more than 200 works from public and private collections, representing nearly every type of technique and subject matter that the artist worked in. De Kooning: A Retrospective will be on view from September 18, 2011 through January 9, 2012. Willem de Kooning’s work has been featured in hundreds of solo and group exhibitions internationally and can be found in nearly every important public collection around the world.
www.thepacegallery.com