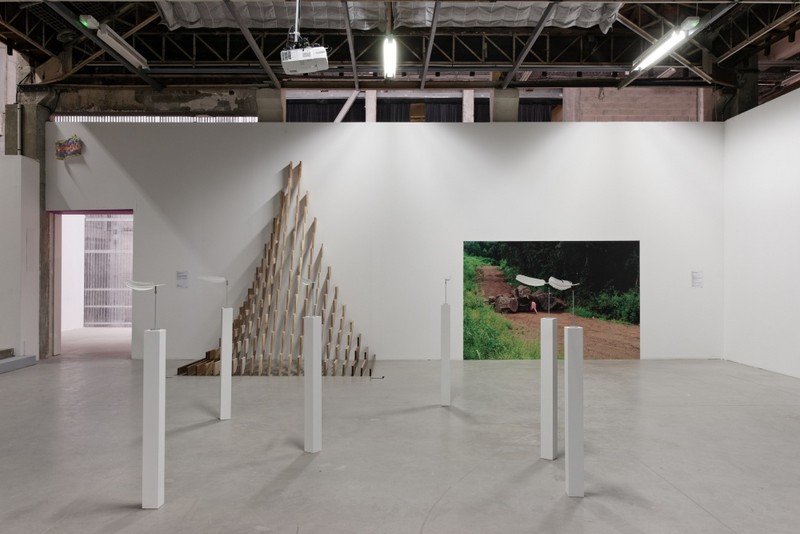 Hailing from Canada, France, Romania and California, the curators collaborating on the project “Artesur, Collective Fictions” use the game of exquisite corpse to explore a database of works by over 250 artists presented on the site arte-sur.org. The resulting exhibition is not the result of consensus or deliberation, but of the mechanical juxtaposition of individual choices. This systematic exploration, paradoxically full of random chance, reveals our relation to artistic production, both global and local.

“Artesur, Collective Fictions” is the curatorial manifestation of a collective writing process. Developed along the principles of the Exquisite corpse, the project offers a stroll through arte-sur.org, an online archive dedicated to the presentation and dissemination of contemporary art from Latin America. Albertine de Galbert invited curator Isabelle Le Normand to form a team of three young curators, the only constraints being that each of them reside in a different country and that none of them have in-depth knowledge of the artistic scenes in Latin America. Along with Le Normand and de Galbert, Andrew Bernadini (Los Angeles), Jesse McKee (Banff) and Anca Rujoiu (London) considered the work of over 250 artists present on the website. They successively chose artworks and responded with critical texts. This selection and writing process began in February and concluded in March 2013, and resulted in grouping 20 artworks, which will be shown in the exhibition.

“Artesur, Collective Fictions” establishes itself not only as a response to the challenges of studying a living archive, but also wishes to preserve the depth of individual subjectivities, and that the selection process remained free from collective bargaining. This exhibition raises questions concerning the function of a curator and proposes new working methods that reflect global interconnectedness. Furthermore, it places the artwork at the center of attention for curatorial research. The curatorial team was encouraged to take part in a game of collecting, thereby creating their own exhibition.

The website Arte-Sur.org is a vector of collaborative and free information, which displays the work of active artists and professionals from the contemporary art field in Latin America. Designed and produced by Albertine de Galbert, following curatorial research conducted between 2008 and 2009 in ten South American countries, the website is developed within the non-for-profit beam prod. by Ana Maria Guerrero and Mathilde Ayoub.
A.d.G.


CURATORS
Albertine de Galbert (Grenoble, France, 1980 - Lives and works in Paris, France). After experiences as a gallery assistant in New York, and PR assistant in Madrid, she takes up for three years the production and co-artistic direction of the documentary film series L’Art and la Manière, portraits of artists broadcasted on Arte TV. In 2011, she creates the website arte-sur.org, a platform dedicated to Contemporary Art in Latin America. Since 2010, she designs curatorial and cultural cooperation projects, mainly between Europe and Latin America.

Isabelle Le Normand (Tours, France, 1980 - Lives and works in Paris, France). As director of Visual Arts at Mains d’OEuvres, a multidisciplinary space in Saint-Ouen, she has curated over 30 exhibitions, as well as curating independently in Paris, Los Angeles, Bourges, Budapest, and Marseille. In 2013 she created an artist exchange program between Paris and Los Angeles in partnership with Machine Project and Mains d’OEuvres. Le Normand recently founded Courtesy, a commercial gallery based in Los Angeles, co-directed by artist Jonathan Bernad.

Andrew Berardini (Huntington Beach, California, 1982 - Lives and works in Los Angeles, USA) Berardini is a writer who has worked for the Armory Center for the Arts and LAXART as a curator, and at Semiotext(e) Press as an editor. Past curatorial endeavors include a public project with Bruce Nauman, a collaboration between Raymond Pandtibon and Yoshua Okon, the Los Angeles premiere for Lawrence Weiner’s Water in Milks, as well as group shows in San Francisco, Los Angeles, Vienna, and Milan. He has published articles and essays in Frieze, Mousse, Fillip and Artforum, amongst others.

Jesse McKee (Saint John, Canada, 1984 - Lives and works in Banff, Canada). He is the curator of the Walter Phillips Gallery at The Banff Centre, where he has produced exhibitions with Mark Leckey, Brian Jungen, Duane Linklater, Julia Feyrer and Tamara Henderson. Previously, he was a curator at Western Front, Vancouver where he commissioned exhibitions with Eli Bornowsky, Sophie Bélair Clément, Neïl Beloufa, and Lee Kit.

Anca Rujoiu (Romania, 1984 - Lives and works in London, UK). She is a curator at FormContent, a project that has led her to curating exhibitions at the Contemporary Art Gallery, Brukenthal National Museum, Romania, Eastside Projects Birmingham and Hollybush Gardens, London. Furthermore, she is a coordinator of special projects at the Royal College of Art, School of Fine Art in London.