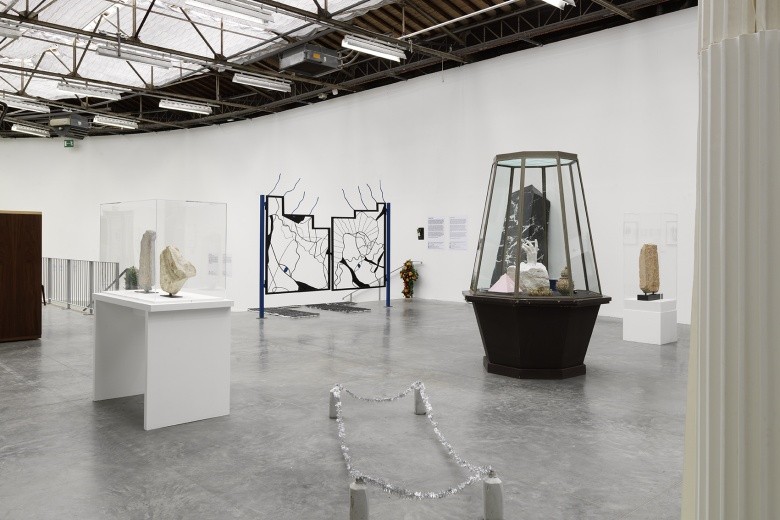 Pursuing their activities alternately in New York, Paris, Milan, Tokyo or Prague, the curators Julie Boukobza, Simon Castets and Nicola Trezzi develop a hybrid activity combining art criticism and curating. Working together here for the first time, they approached their exhibit “Champs Elysées” as a cemetery for works that play on funerary aesthetic and on the persistence of burial rites. Like a cemetery, the exhibition space outlines a new perimeter of investigation, playing on curatorial practices and examining the relationship of art to its eternal partner, death.

In Greek mythology, the abode of the blessed after death. (Webster’s)

In Loss of Breath (1832), Edgar Allan Poe underlines the aesthetic value of tombs with a Freudian slip, confusing the words sepulture and sculpture: “we arrived at the place of sculpture, and I felt myself deposited within the tomb.”1

Born out of crumbling religious beliefs and outdated sanitary concerns, the graveyard continues to materialize the memory of the deceased. Surviving the secularization of Western societies, the cemetery remains an intensely invested space, the inexorable destination for eternal sleep, the metatory retreat of the dead, either buried or cremated. Although conceived to receive the dead, the cemetery, a creation by and for the living, is a reflection of its socioeconomic environment with an illusory varnish of eternity.

Through a selection of either specially produced or already existing artworks, “Champs élysées” invites over twenty artists to turn the exhibition space into an ideal cemetery, reexamining the decorative and performative aspects of the funerary within an immersive display. Contemplating the museum as cemetery, the exhibition transports the aesthetic of the cemetery back to the museum. Described by Paul Valéry as a mere amalgamation of “dead visions”2 museums sometimes appear themselves as cemanderies of lifeless ideas. In « Champs Elysées », artistic representations of death and the cemetery call for further explorations of the gallery space as a context designed to testify to the life of cultural production.

“Champs élysées” suggests links between the graveyard’s aesthetic aspects and its societal function, perceiving fertile artistic ground in the persistence of funerary rites. Selected artists do not only present the idyllic necropolis through its static and hackneyed image (tombstones, chrysanthemums, crucifixes, tears, portraits of the deceased, eco-friendly urns etc.) but also as the premise for guided tours, black magic ceremonies, chess tournaments and secret encounters.

CURATORS
Julie Boukobza lives in New York, where she works as a journalist and art critic. She contributes to numerous French and international publications including Art Press, L’Officiel Art, PIN UP, Double, and Frog. In 2010, she founded the website MODERN TALKING, an editorial project illustrating the contemporary forms of conversation. She recently launched the symposiums series “We Own the Night”, which first edition was held at the Marianne Boesky Gallery (New York) in September 2012.

Simon Castets is based in New York, where he works as an independent curator. Recent projects include the group exhibitions Cherry Picking at Karma International, Zurich, A Stone Left Unturned at Yvon Lambert, Paris, and Aftermath at Taka Ishii Gallery, Kyoto. Upcoming projects include a solo exhibition of Sarah Ortmeyer’s work at Federico Vavassori, Milan and is cocurating 89plus with Hans Ulrich Obrist, a series of exhibitions, publications, and panel conversations about the generation of artists born in 1989 and after.

Nicola Trezzi is an editor and curator based in New York. He is currently US Editor at Flash Art International and his writing has appeared in Il Sole 24 Ore (Milan), Monopol (Berlin), and Flatt (New York). He has lectured at Yale University (New Haven), and Bezalel Academy of Arts and Design (Tel Aviv). He co-organized the following exhibitions: « Painting Overall » at the Prague Biennale 5, « Four Rooms » at the CCA, Warsaw, « Modern Talking » at the Muzeul National de Arta Cluj-Napoca and « Circa 1986 » at HVCCA in Peekskill.