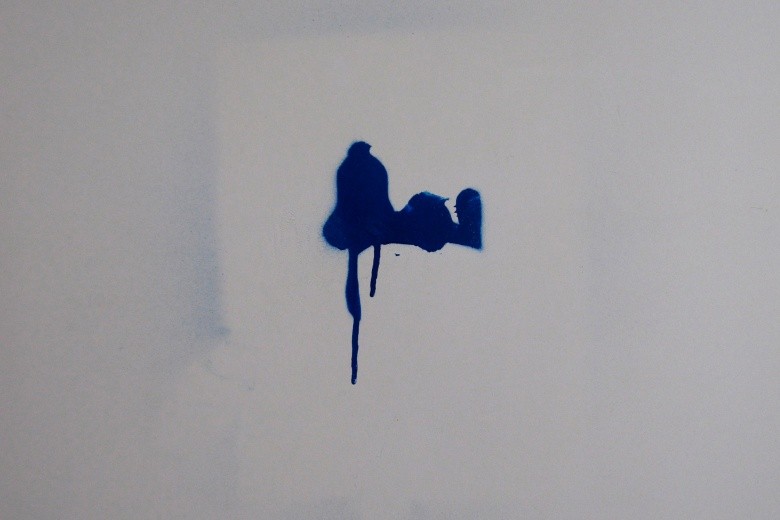 « Yes, we could ask Romy Schneider too, I have contacts in the afterlife, she is really interested in design. It would be just right for this project. Otherwise Jacqueline Maillan is up for doing something at Frieze I think, I’ll have to check with Jacques Chazot with whom I’ve been in touch. »

For his first solo exhibition in Paris, François Curlet, an expert at détournement, reveals a distanced worldview that challenges the clichés of the day. Advertising slogans, human interest stories, or everyday objects give way to a subtle poetry, both existential and demotic. Out of this arises a system built on paradoxes in which – like the Fugu fish so highly valued in Japan – a delicious dish can become a deadly poison. The visitor fluctuates between lighthearted intellectual pleasure and a latent seriousness that could manifest itself at any moment.

Between joyful skepticism and cynical laughter

«Fugu,» a monographic exhibition devoted to the artist François Curlet (b. 1967, lives and works in Brussels), presents at the Palais de Tokyo an extensive selection of pieces from the period between 1985 and 2013. Since the end of the 1980s, the artist has been developing a body of work in which the material world is dismantled, disturbed, and distorted through the poetry of the day to day. By having recourse to the artifact as much as to philosophy, the artist is developing a strategy in which free associations are transformed into allegories, and the mind is seized by surprising dialogs of forms that set the power of imagination in motion and permanently reinvent our natural and material environment. From the existential to the trivial, François Curlet’s fields of interest seem to have no limits, no one territory. Encouraging critical thinking, his work is open to reinvention and surprise, using a vocabulary as close to joyful skepticism as it is to cynical laughter.

Atomic as it is, his work does not obey any algorithm, and each piece seems to proceed from its own theorem instead, while François Curlet searches within each object for its possible «radioactive» qualities. Micro-history,human interest stories, historic events, political news, advertising slogans, social anecdotes, derivative work, and puns are fertile ground for the artist’s work. Hallucinatory vision of things, the work of François Curlet cultivates such borderline states, where the object fluctuates between many fictions and realities, pleasure and poison, just like the eponymous fish, “Fugu”. In the wake of artists such as Erik Satie, George Brecht, Jef Geys, John Knight or the film Mon oncle d’Amérique (1979) by Alain Resnais, François Curlet creates a universe in which humor is also used to unravel social protocol.

Selection of works in the exhibition

Bunker pour six oeufs, 2011
Something between a sarcophagus and a nest, a tomb and a shelter, the Bunker pour six oeufs [Bunker for Six Eggs] toys humorously with the odd and the ambiguous. Between security paranoia and the obsessive will to conserve, these eggs, as reproducible as they are fragile, are both imprisoned and protected by their concrete armature. Borrowing from the iconography of war, the work suggests the vacuousness of our behavior and the permanent search for refuge and security, when «everyone wants to make their nest, whether inheriting, in debt, or furtively, like the cuckoo.”

Chanter l’Enfer, 2010
In 2010, François Curlet visited Father Andras Pandy’s apartment in Brussels, a “psychological Bermuda’s triangle” where the serial killer committed six murders and afterwards dissolved his victims’ corpses in acid. The artist returned from this journey into the macabre with a number of relics, everything from curtains to coat racks, objects still carrying the aura of these dramatic events. The objects were turned into birdhouses and keels, like so many altars inviting the viewer to question the power of matter as a transmitter of evil.

Rorschach Saloon, 1999
This decompression chamber, entitled Rorschach Saloon, is a passageway. The swinging doors in the shape of Rorschach test inkblots open onto a liminal space, inviting the viewer to explore the realms of consciousness and knowledge. Vodka and whiskey, symbolizing the two blocks of the Cold War, are tools left for the visitor to use to attain another state of consciousness. He must then take sides and choose which of these two alcohols he prefers in order to gain access to one of the teachings produced by indoctrination.

Vitrine, 1992
A reversal system and a role-playing game, this piece, entitled Vitrine, toys with the viewer. “The tables have turned” as the saying goes, as the viewer finds himself distorted by the object he’s observing. Using reversal and situation comedy, Vitrine places the viewer at its center, trapped by his exposed body, enlarged and transformed by the materials. Pointing to questions about the relationships between the body, perception and power, François Curlet gives the artwork the ability to transform.

Jonathan Livingstone, 2010-2012
Inspired by the now classic dramatic comedy by Hal Ashby, Harold and Maude (1971), the film Jonathan Livingstone portrays a character driving around in his Type E Jaguar that has been turned into a hearse. The driver, wandering through open countryside, seems lost, even as the situation fluctuates between the pleasure of speed and a potentially fatal accident. This ambivalent, Russian-roulette game of life and death is made bearable because it is legitimized by the trophy-like car.
This project was selected and supported by the sponsorship committee of the Fondation nationale des arts graphiques et plastiques.

Moteur, 1989
Moteur, an industrial object reduced to its mere structure belongs, as an artwork, to the tradition of Duchamp’s readymade. This elementary tool of the industrial era, made of finely woven wicker, was produced by a workshop of blind craftsmen. The hands weaving the object are reminiscent of industrial assembly lines, while the worker is compared to a blind and servile cog in the production cycle. Stripped of its mechanical characteristics, this motor, lying on a plinth, only signals the vacuity of its state.

Western (E.A tricolore italien), 2005-2012
“I am a clandestine traveler moving across the land, a projectile.” Referring to the evolution of the history of the American classic Western genre towards the Italian Spaghetti Westerns, François Curlet characterizes his practice as “Spaghetti Conceptual Arte”. Freeing himself of the orthodox definition of conceptual art, his work, however, appropriates some of its codes (the importance of the idea, of developing a line of logic) in order to de-territorialize—much like the spaghetti does—and imagine new scenarios for creating.

Moonwalk, 2002
An order given by a machine, Moonwalk suggests the possible triggering of Michael Jackson’s classic walk in a passer-by. The work can be seen as a store sign, a traffic sign or light signal, as it redirects advertising and urban furniture codes. Playing as it does with functional equipment and the poetry of everyday life, the machine is also a despot whose messages find themselves somewhere between the pragmatic order and space travel. François Curlet has dreamed up an educational device meant to prepare the people for future walks on the moon.
www.palaisdetokyo.com