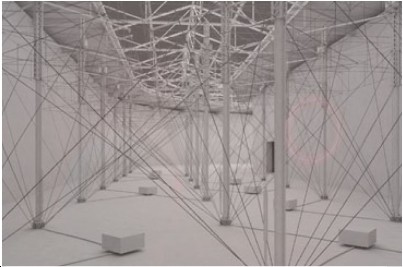 A few houses, a service station, a post office, a couple of diners... and a mysterious scientific research base. Gakona, a small village in the center of Alaska, is home to the American HAARP research program (High-frequency Active Auroral Research Program). Inspired by the works of the inventor Nikola Tesla, it is believed that researchers there are studying the transmission of electricity in the high strata of the atmosphere. But because of its military funding and the fears associated with electromagnetism, HAARP has also become an inexhaustible source of rumors. From climatic disruption to influence over human behavior, this forest of antennas has been credited with powers worthy of science fiction.

Made up of four solo exhibitions (Micol Assaël, Ceal Floyer, Laurent Grasso and Roman Signer), the GAKONA session lies at the intersection of fact and rumor, reality and phantasm, science and imagination. Presenting works that elude any suggestion of a fixed interpretation, it thus pursues the Palais de Tokyo’s intention of promoting a dynamics of looking and thinking, based on a permanent oscillation between opposite poles.
www.palaisdetokyo.com