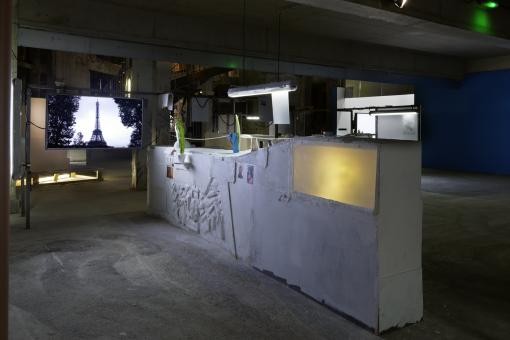 At the center of the Galerie Basse, in a totally open space, composite assemblages appear like islands. The constituent elements of these installations are originally visible in three videos. For his first solo exhibition in a French institution, Neïl Beloufa has transformed a section of the Galerie Basse—before its official opening to the public—into three film sets. In the course of a staged demolition scene, the sets are recycled into art and become the backdrop to the three videos that portray a world in which there is no hierarchy between different kinds of information and where special effects tend to replace reality.
Neïl Beloufa (b. 1985, lives and works in Paris) offers a fragmented experience of sight, memory and the stereotypes that surround and shape us. His exhibitions often take the form of modular environments where the viewer is called on to watch one or more videos in which the story line confronts or converges into elements that are found in the surrounding exhibition space. His videos are the result of a discerning mixture of fiction, role-playing, and contemplative sequences, the viewer being placed at the center of the artwork.
www.palaisdetokyo.com