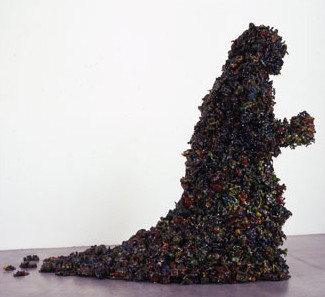 On the short waves of our radios, voices read out uninterrupted series of numbers. 2... 11... 58... 35... 23...
Whether they are encrypted instructions intended for sleeping agents, messages exchanged between traffickers, or simple telephone settings, the “Spy Numbers Stations” have been broadcasting for several decades without their precise function becoming known.
In the wake of GAKONA, the previous exhibit inspired by the work of Nikola Tesla, SPY NUMBERS continues the exploration of the electromagnetic spectrum and its margins in this second session of 2009. Beyond the visible and closer still to the infra-thin and the spectral, the Palais de Tokyo experiments with forms of art that elude any wistful desire for fixed interpretations. In an exhibition area reduced by half due to renovations, SPY NUMBERS brings together a variety of artists whose interests include mathematical encoding, the production of aurora borealis, archiving contact lenses, seismic sensors, the disappearance of hanged men and mountain summits.
www.palaisdetokyo.com