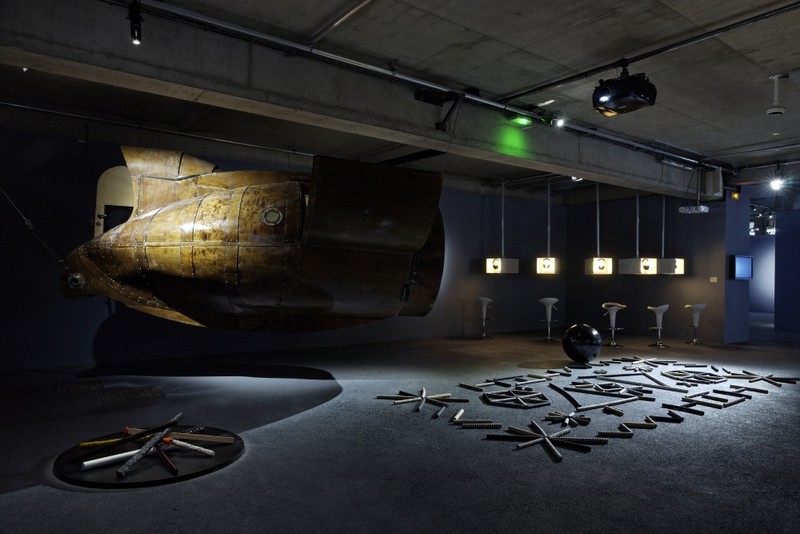 Curator, art critic and lecturer at the Sorbonne, Sinziana Ravini is known for her “exhibition-novels.” The Black Moon is «a film-exhibition» that presents an encounter between a man and a woman visiting an exhibition. Meanings suggested by the juxtaposition of works by diverse artists are meant to suggest a narrative. Thus the story of this relationship unfolds around the works, playing with love, art and life. While one searches only for a fleeting tryst, the other aspires to finding true love. Fleeting tryst or true love: which will triumph?


A man and a woman who haven’t seen each for a long time run into each other in an exhibition. They begin to talk about the artworks around them, all the while reminiscing about their encounters in Moscow, Paris and Venice.

This is not just a story about the encounter between a man and a woman, but also about two philosophical principles. On one hand, we have random materialism that seeks only fugitive encounters; on the other, a romantic idealism that negates the object of its desire, preferring an ideal passion that will never evolve into a true knowledge of the other. One wants only the beauty of the moment, the other the beauty of a dream that can only materialize in the future. Who will win over who? Do they really love each other, or is this only a fleeting relationship? And what role does art play in this story?

“The Black Moon” is an exhibition about love, art and life, narrated in a film and a book. Sinziana Ravini is at once here the curator, film director and writer, blurring the lines between art, cinema and literature. The exhibition thus becomes a space for both projection and transference, inside of which it is no longer the viewer’s gaze that constitutes the artwork, but rather the intersubjective field of intersecting perceptions.

Visitors will come across the surrealist dreams of Melvin Moti, the psychonautical journeys of Pierre Huyghe, the temporal games of Ursula Mayer, the retro-futuristic imaginings of John Bock, the narrated fetishes of Émilie Pitoiset, the impossible love of Leigh Ledare, the metaphysical materialism of Isabel Nolan, the board games of Boris Achour and the erotic-alchemical sessions held by Ylva Ogland.

What role does love play in a society whose values have become slippery and relative? According to Lacan, “Love is giving what you don’t have to someone who doesn’t want it.” Zygmunt Bauman, however, stated that love often takes the guise of a financial investment in which the loved one is nothing but a stock option, subject to the rise and fall of the market. How can one challenge such cynical theories without falling prey to Hollywoodstyle naivety? Can love become a means of resisting consumerism, or has it become its own “loss leader”?
S.R.

CURATOR
Sinziana Ravini (France, 1976, lives and works in Paris) is a curator, art critic and a senior lecturer at the University Paris 1 – Panthéon-Sorbonne. She is the editor-in-chief of the Swedish magazine Paletten and director of The Future Lasts Forever. She has organized “novel exhibitions” such as “The Chessroom” (2013), “The Hidden Mother” (2012) and “Le Château d’étain” (2010).